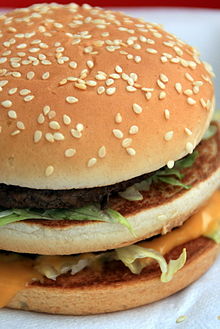 The Big Mac Index is published by The Economist as an informal way of measuring the purchasing power parity (PPP) between two currencies and provides a test of the extent to which market exchange rates result in goods costing the same in different countries. It "seeks to make exchange-rate theory a bit more digestible".[1]

The index takes its name from the Big Mac, a hamburger sold at McDonald's restaurants.

The Big Mac index was introduced in The Economist in September 1986 by Pam Woodall as a semi-humorous illustration and has been published by that paper annually since then. The index also gave rise to the word burgernomics.[2]

UBS Wealth Management Research has expanded the idea of the Big Mac index to include the amount of time that an average worker in a given country must work to earn enough to buy a Big Mac. The working-time based Big Mac index might give a more realistic view of the purchasing power of the average worker, as it takes into account more factors, such as local wages.[3]

One suggested method of predicting exchange rate movements is that the rate between two currencies should naturally adjust so that a sample basket of goods and services should cost the same in both currencies (PPP). In the Big Mac index, the basket in question is a single Big Mac burger as sold by the McDonald's fast food restaurant chain. The Big Mac was chosen because it is available to a common specification in many countries around the world as local McDonald's franchisees at least in theory have significant responsibility for negotiating input prices. For these reasons, the index enables a comparison between many countries' currencies.

The Eurozone is mixed, as prices differ widely in the EU area. As of April 2009, the Big Mac is trading in Germany at €2.99, which translates into US$3.96, which would imply that the Euro is slightly trading above the PPP, with the difference being 10.9%.

The Economist sometimes produces variants on the theme. For example in January 2004, it showed a Tall Latte index with the Big Mac replaced by a cup of Starbucks coffee.[5]

In 2007, an Australian bank's subsidiary, Commonwealth Securities, adapted the idea behind the Big Mac index to create an "iPod index." The bank's theory is that since the iPod is manufactured at a single place, the value of iPods should be more consistent globally. However, this theory can be criticised for ignoring shipping costs, which will vary depending on how far the product is delivered from its "single place" of manufacture in China.[6]

Bloomberg L.P. introduced the Billy index where they convert local prices of Ikea's Billy bookshelf into US dollars and compare the prices.[7][8][9][10]

The burger methodology has limitations in its estimates of the PPP. In many countries, eating at international fast-food chain restaurants such as McDonald's is relatively expensive in comparison to eating at a local restaurant, and the demand for Big Macs is not as large in countries like India as in the United States. Social status of eating at fast food restaurants like McDonald's in a local market, what proportion of sales might be to expatriates, local taxes, levels of competition, and import duties on selected items may not be representative of the country's economy as a whole.

In addition, there is no theoretical reason why non-tradable goods and services such as property costs should be equal in different countries: this is the theoretical reason for PPPs being different from market exchange rates over time. The relative cost of high-margin products, such as essential pharmaceutical products, or cellular telephony might compare local capacity and willingness to pay, as much as relative currency values.

McDonald's is also using different commercial strategies which can result in huge differences for a product. Overall, the price of a Big Mac will be a reflection of its local production and delivery cost, the cost of advertising (considerable in some areas), and most importantly what the local market will bear - quite different from country to country, and not all a reflection of relative currency values. In some markets, a high-volume and low-margin approach makes most sense to maximize profit, while in others a higher margin will generate more profit. Thus the relative prices reflect more than currency values. For example, a hamburger sandwich costs only €1 in France, and €1.50 in Belgium, but overall, McDonald's restaurants are cheaper in Belgium.[citation needed]

Also prices of Big Macs can also vary greatly from different areas of a country; a Big Mac in New York City will be more expensive than a Big Mac in a suburb an hour away.

The Big Mac (and virtually all sandwiches) vary from country to country with differing nutritional values, weights and even nominal size differences.

Not all Big Mac burgers offered by the chain are exclusively beef. In India — which is a predominantly Hindu country — beef burgers are not available at any McDonald's outlets. The chicken Maharaja Mac serves as a substitute for the Big Mac.

There is a lot of variance with the exclusively Beef "Big Mac": the Australian version of the Big Mac has 22% fewer calories than the Canadian version, and is 8% lighter than the version sold in Mexico.[12]

In October 2009, it was reported that all three of the McDonald's in Iceland would be closing primarily due to the chain's high cost of importing most of the chain's meat and vegetables from the Eurozone. At the time, a Big Mac in Iceland cost 650 krona ($5.29), and the 20% price increase that would have been needed to stay in business would have increased that cost to 780 krona ($6.36).[13]

Five most expensive (22 July 2010) (not considering the fact that the buyer's equivalent minimum wage, and therefore purchasing power, is different)

Five most affordable (22 July 2010) (not considering the fact that the buyer's equivalent minimum wage, and therefore purchasing power, is different)