These units may or may not have precise objectively measurable values, but all of them measure quantities that have been defined within the S.I. system of units.

In the Zork series of games, the Great Underground Empire had its own system of measures, the most frequently referenced of which was the bloit. Defined as the distance the king's favorite pet could run in one hour (spoofing a popular legend about the history of the foot), the length of the bloit varied dramatically, but the one canonical conversion to real-world units puts it at approximately two-thirds of a mile (1 km). Liquid volume was measured in gloops, and temperature in degrees Q (57°Q is said to be the freezing point of water).[1] 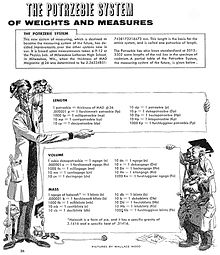 In issue 33, Mad published a partial table of the "Potrzebie System of Weights and Measures", developed by 19-year-old Donald E. Knuth, later a famed computer scientist. According to Knuth, the basis of this new revolutionary system is the potrzebie, which equals the thickness of Mad issue 26, or 2.263348517438173216473 mm.[2]

Volume was measured in ngogn (equal to 1000 cubic potrzebies), mass in blintz (equal to the mass of 1 ngogn of halva, which is "a form of pie [with] a specific gravity of 3.1416 and a specific heat of .31416"), and time in seven named units (decimal powers of the average earth rotation, equal to 1 "clarke"). The system also features such units as whatmeworry, cowznofski, vreeble, hoo, and hah.

The beard-second is a unit of length inspired by the light-year, but used for extremely short distances such as those in nuclear physics. The beard-second is defined as the length an average beard grows in one second. Kemp Bennet Kolb defines the distance as exactly 100 angstroms,[3] (i.e. 10 nanometers) while Nordling and Österman's Physics Handbook has it half the size at 5 nanometers.[4] Google Calculator supports the beard-second for unit conversions using the latter conversion factor.[5]

A measure of distance equal to about 7⁄8 of a mile (1.4 km), defined as the closest distance at which sheep remain picturesque. The Sheppey is the creation of Douglas Adams and John Lloyd, included in The Meaning of Liff, their dictionary of putative meanings for words that are actually just place names.[6] It is named after the Isle of Sheppey in the UK.

The smoot is a unit of length, defined as the height of Oliver R. Smoot — who, fittingly, was later the president of the ISO. The unit is used to measure the length of the Harvard Bridge. Canonically, and originally, in 1958 when Smoot was a Lambda Chi Alpha pledge at MIT (class of 1962), the bridge was measured to be 364.4 smoots, plus or minus one ear, using Mr. Smoot himself as a ruler.[7] At the time, Smoot was 5 feet, 7 inches, or 170 cm, tall.[8] Google Earth and Google Calculator includes the smoot as a unit of measurement.

A barn is a serious unit of area used by nuclear physicists to quantify the scattering or absorption cross-section of very small particles, such as atomic nuclei.[9] It is one of the very few units which are accepted to be used with SI units, and one of the most recent units to have been established (cf. the knot and the bar, other non-SI units acceptable in limited circumstances).[10] One barn is equal to 1.0×10−28 m2. The name derives from the folk expression "Couldn't hit the broad side of a barn", used by particle accelerator physicists to refer to the difficulty of achieving a collision between particles. The outhouse (1.0×10−6 barns) and shed (1.0×10−24 barns) are derived by analogy.

This unit is similar in concept to the attoparsec, combining very large and small scales. When A barn (b) is multiplied by the megaparsec (Mpc) - a very large unit of length used for measuring the distances between galaxies - the result is a human-scaled unit of volume approximately equal to 2⁄3 of a teaspoon (about 3 ml).

This unit is approximately equal to a standard bottle of Champagne (0.75 litres), and is designed to allow the use of wine in scientific experiments in the science comedy Look Around You.

This facetious engineering unit is defined as 250 watts—about a third of a horsepower.[11]

The tatum is the "lowest regular pulse train that a listener intuitively infers from the timing of perceived musical events." It is named after the legendary jazz pianist Art Tatum.

The Friedman is approximately six months, specifically six months in the future, and named after columnist Thomas Friedman who repeatedly used the span in reference to when a determination of Iraq's future could be surmised.[12][13][14][15][16][17][18]

These units describe dimensions which are not and can not be covered by the S.I system of units.

Tom Weller suggests the humorous Rictus scale (a takeoff of the conventional Richter scale) for earthquake intensity, as pertains to later media coverage of the event.[19]

Physicist Paul Dirac was known among his colleagues for his precise yet taciturn nature. His colleagues in Cambridge jokingly defined a unit of a dirac which was one word per hour.[20] 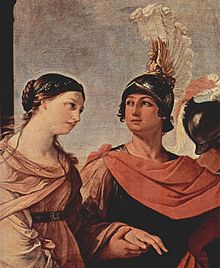 Helen leaving for Troy with Paris, as depicted by Guido Reni

Helen of Troy (from the Iliad) is widely known as "the face that launched a thousand ships". Thus, 1 milliHelen is the amount of beauty needed to launch a single ship.

According to The Rebel Angels, a 1981 novel by Robertson Davies, this system was invented by Cambridge mathematician W.A.H. Rushton. However, the term was possibly first suggested by Isaac Asimov.[21] The obvious reference is Marlowe's lines from the 1592 play The Tragical History of Doctor Faustus, "Was this the face that launched a thousand ships / And burnt the topless towers of Ilium?" [22] The word Helen is also used in the book Pretties, the second book in the series Uglies by Scott Westerfeld. In that book, the characters joke about how pretty something looks in Helens and megaHelens.

The Catalogue of Ships from Book II of The Iliad, which describes in detail the commanders who came to fight for Helen and the ships they brought with them, details a total of 1,186 ships which came to fight the Trojan War. As such, Helen herself has a beauty rating of 1.186 Helens, capable of launching more than one thousand ships.

Negative values have also been observed—these, of course, are measured by the number of ships sunk or the number of clocks stopped. An alternative interpretation of 1 negative Helen is the amount of negative beauty (i.e. ugliness) that can launch one thousand ships the other way.

David Goines has written a humorous article[23] describing various Helen-units. It has a chart with the fire-lighting and ship-launching capability for different powers of "Helens". For example a picohelen (ph) (10−12 helens) indicates the amount of beauty that can "Barbecue a couple of Steaks & Toss an Inner Tube Into the Pool".

Thomas Fink, in The Man's Book[24] defines beauty both in terms of ships launched, and also in terms of the number of women that one woman will, on average, be more beautiful than. One Helen (H) is the quantity of beauty to be more beautiful than 50 million women, the number of women estimated to have been alive in the 12th century BC. Ten Helena (Ha) is the beauty sufficient for one oarsman (of which 50 are on a ship) to risk his life, or be the most beautiful of a thousand women. Beauty is logarithmic on a base of 2. For beauty to increase by 1 Ha, a woman must be the most beautiful of twice as many women. One Helen is 25.6 Ha. The most beautiful woman who ever lived would score 34.2 Ha, and 1.34 H, the pick of a dozen women would be 3.6 Ha, and 0.14 H.

The unit of bogosity, derived from the fictional field of Quantum Bogodynamics. The Lenat is seldom used, as it is understood that it is too large for normal conversation. Its most common form is the microlenat.[25]

A MegaFonzie is a fictional unit of measurement of an object's coolness invented by Professor Farnsworth in the Futurama episode, Bender Should Not Be Allowed on TV. A 'Fonzie' is about the amount of coolness inherent in the Happy Days character Fonzie.[26]

The Thaum is a measuring unit used in the Terry Pratchett series of Discworld novels to quantify magic. It equals the amount of mystical energy required to conjure up one small white pigeon, or three normal-sized billiard balls. It can, of course, be measured with a thaumometer, and regular SI Prefixes apply (e.g. millithaum, kilothaum).[27]

A thaumometer looks like a black cube with a dial on one side. A standard one is good for up to a million thaums - if there is more magic than that around, measuring it should not be your primary concern.

It is not to be confused with the magical particle "thaum" from the same series of novels.

During WW2, scientists working for DMWD encountered a particularly obstructive British Naval Officer called Commander Pouter, for whom the unit of Obstruction was named, due to his implacable opposition to any work being carried out in the field for which he was personally responsible.

Subsequently, the micropouter was used, as it was hoped that no individual of a similarly difficult disposition would be encountered, and the pouter was too large a unit for everyday use.[28]

This is a unit of fame or hype, derived from Andy Warhol's dictum "everyone will be world-famous for fifteen minutes" — it represents, naturally, fifteen minutes of fame. Some multiples are:

Also used simply as meaning 15 minutes; as the Warhol worm, that could infect all vulnerable machines on the entire Internet in 15 minutes or less.

The canard is a unit of quackery created by Andy Lewis in the need for a fractional fruitloopery index.[31] It is proposed as an SI Unit to replace the old Crackpot Index that was presented in 1998.

It scores on a scale from 0 to 10 the quantity of quackery used.

A Quackometer (measurer of fruitloopery) can be found at http://www.quackometer.net/?page=quackometer. This website measures webpages and also association of names with quackery.