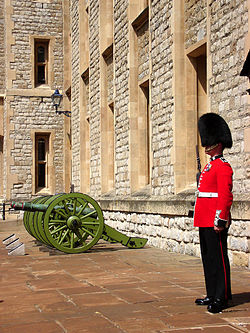 A Coldstream Guards sentry outside the Jewel House (Tower of London)

Her Majesty's Coldstream Regiment of Foot Guards, also known officially as the Coldstream Guards (COLDM GDS), is a regiment of the British Army, part of the Guards Division or Household Division.

It is the oldest regiment in the Regular Army in continuous active service, originating in Coldstream, Scotland in 1650 when General George Monck founded the regiment. It is one of two regiments of the Household Division that can trace its lineage to the New Model Army, the other being the Blues and Royals (Royal Horse Guards and 1st Dragoons).

The grouping of buttons on the tunic is a common way to distinguish between the regiments of Foot Guards. Coldstream buttons are arranged in pairs, and a star of the garter is marked on their brassware.

The regiment is ranked second in the order of precedence, behind the Grenadier Guards. This is because the Grenadier Guards have served the Crown for a longer period of time. However, the Coldstream Guards is an older regiment, and because of this, has the motto Nulli Secundus (Second to None). The regiment has been referred to as the "Second Regiment of Foot Guards" in Parliamentary state papers,[1] but this term has long fallen into disuse and was never used by the regiment, hence their motto. When parading with the other four regiments, is always on the extreme left of the line, with the Grenadier Guards on the extreme right. This ensures that the regiment is indeed "Second to None".

Currently the most prominent role of the 1st Battalion and No. 7 Company is the performance of ceremonial duties in London and Windsor as part of the Household Division. No. 7 Company serves as an incremental Company in London and amongst other duties provides a Guard for the Queen's Birthday Parade. Duties include the State Opening of Parliament, Trooping the Colour, and the Remembrance Sunday parade. No. 7 company is involved in the Changing of the Guard.

Companies that make up the regiment are traditionally numbered – the 1st Battalion contains HQ Coy, plus No. 1, No. 2, No. 3 and No. 4 (Support) Coys. The Coldstream Guards Band and the staff of RHQ constitute No. 15 Coy. No. 7 Coy is the incremental company that is used for public duties and maintains the traditions of the 2nd Battalion. New officers destined for the regiment that are at Sandhurst or at ATR Pirbright form No. 13 Coy, while Guardsmen under training at ITC Catterick make up No. 14 Coy.

The Corps of Drums, in addition to their ceremonial role, has the role of machine gun platoon. All Guardsmen for public duties wear the 'Home Service' Dress tunic in summer or greatcoat in winter and bearskin with a red plume. The Coldstream Guards regimental band plays at Changing of The Guard, state visits and many other events. All of the regiments' musicians were trained as medical orderlies, however they now undertake a role in Nuclear, Biological and Chemical decontamination.

Unlike the other four regiments of foot guards, which recruit from each of the four home nations, the Coldstream Guards has a specific recruiting area, which encompasses the counties that Monck's Regiment passed through on its march from Coldstream to London.

The origin of the Coldstream Guards lies in the English Civil War when Oliver Cromwell gave Colonel George Monck permission to form his own regiment as part of the New Model Army. Monck took men from the regiments of George Fenwick and Sir Arthur Haselrig, five companies each, and on 23 August 1650 formed Monck's Regiment of Foot. Less than two weeks later this force took part in the Battle of Dunbar, at which the Roundheads defeated the forces of Charles Stuart. Monck's regiment was left in Scotland.

After Richard Cromwell's death, Monck gave his support to the Stuarts, and on 1 January 1660 he crossed the River Tweed into England at the village of Coldstream, from where he made a five-week march to London. He arrived in London on 2 February and helped in the Restoration of the monarchy. For his help, Monck was given the Order of the Garter and his regiment was assigned to keep order in London. However, the new parliament soon ordered his regiment to be disbanded with the other regiments of the New Model Army. 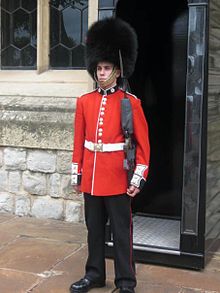 A Coldstream Guard at the Tower of London, July 2006

Before that could happen, Parliament was forced to rely on the help of the regiment against the rebellion by the Fifth Monarchists led by Thomas Venner on 6 January 1661. The regiment successfully defeated the rebels and on 14 February the men of the regiment symbolically laid down their arms as part of the New Model Army and were immediately ordered to take them up again as a royal regiment of The Lord General's Regiment of Foot Guards, a part of the Household Troops.[2]

The regiment saw active service in Flanders and in the Monmouth Rebellion, including the decisive Battle of Sedgemoor in 1685. After 1688 they fought in the Battle of Walcourt in 1689, the Battle of Landen and the Siege of Namur.

In 1760, the 2nd Battalion was sent to Germany to campaign under Prince Ferdinand of Brunswick and fought in the Battle of Wilhelmstal and at the Castle of Arnoneberg. Three Guards companies of 307 men under Coldstream commander Colonel Matthew fought in the American War of Independence. 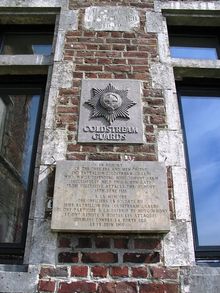 The Coldstream Regiment saw extensive service in the wars against the French Revolution and in the Napoleonic Wars. Under the command of Sir Ralph Abercrombie they defeated French troops in Egypt. In 1807 they took part in the investment of Copenhagen. In January 1809 they sailed to Portugal to join the forces under Sir Arthur Wellesley. The 2nd Battalion joined the Walcheren Expedition. Later it served as part of the 2nd Guards Brigade in the chateau of Hougoumont on the outskirts of the Battle of Waterloo. This defence is considered one of the greatest achievements of the regiment, and an annual ceremony of "Hanging the Brick" is performed each year in the Sergeants' Mess to commemorate the efforts of Cpl James Graham and Lt-Col James Macdonnell, who shut the North Gate after a French attack.[3] Wellesley himself declared after the battle that "the success of the battle turned upon closing the gates at Hougoumont".[4]

The regiment was later part of the British occupation forces of Paris until 1816.

During the Crimean War, the Coldstream Guards fought in the battles of Alma, Inkerman and Sevastopol. On their return, four of the Guardsmen were awarded the newly-instituted Victoria Cross.

The regiment received its current name, The Coldstream Guards, in 1855. In 1882 they were sent to Egypt against the rebels of Ahmed 'Urabi and in 1885 in the Suakin Campaign. In 1897, the Coldstreamers were reinforced with the addition of the 3rd battalion. The 1st and 2nd battalions were dispatched to South Africa at the outbreak of the Second Boer War.

Coldstream Guards in France, 1914. Painting by W. B. Wollen 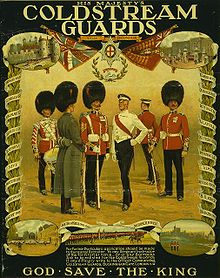 Recruitment poster for the Coldstream Guards, 1914

At the outbreak of the First World War, Coldstreamers were among the first British regiments to arrive in France after Britain declared war on Germany. In the following battles, they suffered heavy losses, in two cases losing all their officers. At the first Battle of Ypres the 1st battalion was virtually annihilated – by 1 November down to 150 men and the Lt Quartermaster. They fought in Mons, Loos, Somme, Ginchy and in the 3rd Battle of Ypres. They also formed the 4th (Pioneer) Battalion, which was disbanded after the war, in 1919. The 5th Reserve battalion never left Britain before it was disbanded.

When the Second World War began, the 1st and 2nd battalions of the Coldstream Guards were part of the British Expeditionary Force in France; whilst the 3rd Battalion was on overseas service in the middle east. Additional 4th and 5th battalions were also formed for the duration of the war. They fought extensively in North Africa and Europe as dismounted infantry and the 1st battalion in the Guards Armoured Division. The 4th battalion first became a motorized battalion in 1940 and then an armoured battalion in 1943. The 4th and 5th served as part of the Guards Armoured Division. 6th battalion was also formed in 1941 but was disbanded in 1943 without seeing any action.

Coldstreamers gave up their tanks at the end of the war, the new battalions were disbanded, and the troops distributed to the 1st and 2nd Guard Training Battalions.

The Regimental Band of the Coldstream Guards were the first act on stage at the Wembley leg of the 1985 Live Aid charity concert. They played for the Prince and Princess of Wales. More recently, the band's Fanfare team opened Live 8 in Hyde Park in the summer of 2005.

After the Cold War, the 1st battalion was dispatched to the first Gulf War where it was involved in prisoner of war handling and other roles. In 1993, due to defence cutbacks, the 2nd battalion was placed in suspended animation and its colours are maintained by No 7 Company, which is permanently stationed in London on ceremonial duties.

For much of the 1990s, the 1st Battalion was stationed in Munster, Germany, in the Armoured Infantry Role with Warrior APCs as part of 4th Armoured Brigade. In 1993–1994 the battalion served as an armoured infantry battalion in peacekeeping duties in Bosnia as part of UNPROFOR with the Battalion Headquarters in Vitez with additional outposts in Gornji Vakuf and Sarajevo. The Coldstream Guards were the first British regiment to enter Sarajevo in the conflict.

The battalion was posted to Derry, Northern Ireland on a two-year deployment in 2001. It deployed to Iraq in April 2005 for a six-month tour with the rest of 12th Mechanised Brigade, based in the south of the country. The battalion lost two of its soldiers, on 2 May, near Al Amarah and on 18 October at Basra.

Des Browne, Secretary of State for Defence, announced on 19 July 2007 that in October 2007 the battalion was to be sent to Afghanistan as part of 52 Infantry Brigade. In March 2008, while on patrol with the ANA, members of the Regiment discovered a Taliban torture chamber.

In October 2009 the Battalion deployed on Operation Herrick 11, with Number One and Number Three Companies deploying to the Babaji area of central Helmand Province, Afghanistan. Number Two Company was allocated a task of training Afghan National Police recruits at various Police Training Centres. Number One Company's deployment to PB4 Babaji was heralded as the Battalion's most difficult excursion since Aden in 1948, playing a major role in Operation Moshtarak in February 2010 in addition to suffering five dead and multiple casualties, including several lost limbs. The Battalion returned to the UK in April 2010. 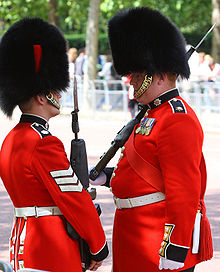 A Colour Sergeant of the Coldstream Guards (right) speaking to a Lance-Sergeant (left).

There are 117 battle honours:

Original information from the 1911 Encyclopædia Britannica