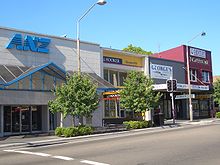 Chester Hill, a suburb of local government area City of Bankstown is located 25 kilometres west of the Sydney central business district, in the state of New South Wales, Australia, and is part of the Greater Western Sydney region. Chester Hill shares the postcode of 2162 with the neighbouring suburb of Sefton.

It is regarded by some that the name was derived from the local aboriginal inhabitants, who thought they had discovered a mountain, instead the tribal elder proclaimed it was "just a hill" hence the name "Chester Hill".

The name for Chester Hill is an inversion of Hillchester, an English locality. 'Chester' is one of the English forms of the Latin word 'castra' meaning a fortified camp. The name for the suburb was conferred by Mrs H. A. McMillan, who first wished to call the place Hillcrest, after an estate near Regent’s Park, and then Hillchester but neither of these names met with official approval. [1]

Originally part of John Thomas Campbell's estate, known as Campbell Hill, it covered 1,000 acres (4.0 km2). Land was used for market gardens and orchards until the opening of the railway line in 1924 when the area developed into residential and light industrial. [2]

Chester Square in Chester Hill is a newly developed shopping centre, catering for the catchment of Chester Hill,Sefton, Birrong and Bass Hill. Directly situated behind the main road of Waldron Road. Amenities in the suburb include the Chester Hill branch of the Bankstown City Libraries, Chester Hill Fire Station and a community centre.

Chester Hill railway station is on the Bankstown Line of the CityRail network.

In the 2006 Australian census, Chester Hill recorded a population of 10,513 with 37.4% being born overseas.[1] Chester Hill, like the rest of the Bankstown area, is a very culturally diverse suburb. The largest ethnic groups in Chester Hill are those coming from a Lebanese or Vietnamese background. [3]