The Ornate Hawk-Eagle, Spizaetus ornatus, is a bird of prey from the tropical Americas. Like all eagles, it is in the family Accipitridae. This species is notable for its vivid colors, which differ markedly between adult and immature birds. 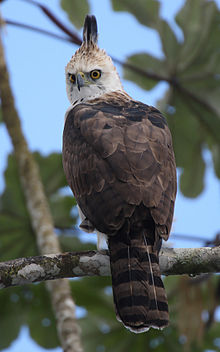 The typical adult has blackish upperparts and crown, bright chestnut sides to the neck and breast and a black-edged white throat and central breast. The rest of the underparts and feathered legs are white barred with black, and the tail has broad black bars. The underwings are white, with barred flight feathers; due to the heavy pattern birds usually look rather dark in flight.

Sexes are similar, but young birds have a white head and underparts, with a grey crest, brown upperparts, and barring only on the flanks and legs.

This bird is found in humid tropical forests from southern Mexico and the Yucatán Peninsula, to Trinidad and Tobago, south to Peru and Argentina. They are able to tolerate some degree of habitat fragmentation, breeding successfully near cities and in forest fragments as small as 200 hectares (490 acres).[1] Despite a slender build and a body weight no greater than a large Buteo hawk, the Ornate Hawk-Eagle is a notably powerful predator which like other booted eagles can take prey up to 5 times its own weight. Birds are the principal prey and have ranged in size from 180 g (6.4 oz) to 8 kg (18 lbs) when taken. Prey species have included Little Blue Herons, curassows, toucans, wood-quails, pigeons, macaws, parrots, cotingas, chickens and even a Black Vulture. Mammals are also significant prey, with agoutis, squirrels, rats, procyonids and monkeys often taken. Reptiles are also occasionally hunted.[2]

The male's courtship display is a dive with folded wings, and a climb, sometimes completing a loop. The pair will touch talons in flight as the female rolls on her back. This species builds a large stick nest in a high tree (e.g. Ceiba), many meters above ground. The nest is around 1 meter (3 ft) in diameter. Most breeding activity occurs around April/May, differing slightly according to location: in Guatemala breeding activity was observed from March to June, in Costa Rica in April and May, in Panama from November/December to May, and in the lowlands of Ecuador in March and April.[3]

Though locally rare, it is not considered a threatened species by the IUCN due to its wide range.[4]