The Mountain Hawk-Eagle or Hodgson's Hawk-eagle (Nisaetus nipalense, earlier treated under Spizaetus[2]) is a bird of prey. Like all eagles, it is in the family Accipitridae. It breeds in the Indian Subcontinent, from India, Nepal and Sri Lanka to Thailand, Taiwan, Indonesia and Japan.[3] 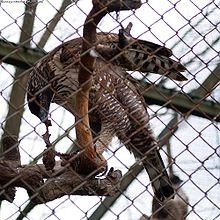 The Mountain Hawk-Eagle is a medium-large raptor at 69–84 cm (27–33 in) in length and a wingspan of 134–175 cm (53–69 cm). The typical adult has brown upperparts and pale underparts, with barring on the undersides of the flight feathers and tail. The breast and belly and underwing coverts are heavily streaked. The wings are broad with a curved trailing edge, and are held in a shallow V in flight. Sexes are similar, but young birds are often whiter-headed.

The Sri Lankan and south Indian subspecies (S. n. kelaarti) is smaller and has unstreaked buff underwing coverts. A 2008 study based on the geographic isolation and differences in call suggest that this be treated as a full species, Nisaetus kelaarti.[4] One male of this subspecies weighed 1.93 kg (4.2 lbs). The Japanese subspecies N. n. orientalis is larger, lighter, and has only a very small crest, which is large in the other two subspecies. The Japanese subspecies usually weighs 2.2-3.6 kg (4.8-8 lbs).[5] 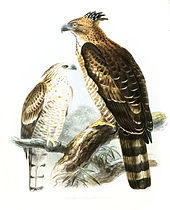 The heavier underpart streaking and wing shape help to distinguish this species from the similar Crested Hawk-Eagle (Nisaetus cirrhatus).

It is a bird of mountain woodland, which builds a stick nest in a tree and lays usually a single egg. Mountain Hawk-Eagles eat small mammals, birds and reptiles.

Though it is not considered a globally threatened species, the Japanese population is declining. As the species is a K-strategist like all eagles, it was feared that the ongoing population reduction of N. n. orientalis might lead to loss of genetic diversity, and consequently inbreeding depression. However, genetic diversity was shown to be still considerable at present.[6]