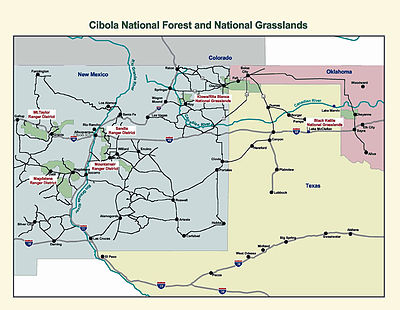 The Cibola National Forest is a 1,631,266 acres (6,601.5 km2) United States National Forest in western and central New Mexico, USA. [1] The forest also manages four National Grasslands that stretch from northeastern New Mexico eastward into the Texas Panhandle and western Oklahoma. It is administered by the United States Forest Service from offices in Albuquerque, New Mexico. Elevation ranges from 5,000 ft (1,500 m) to 11,301 ft (3,445 m). (The preceding figures do not include any of the four National Grasslands mentioned below, which are detailed in their individual articles.)

In central New Mexico the Mountainair Ranger District in Torrance, northwestern Lincoln, and eastern Valencia counties, includes the Gallinas Mountains and the Manzano Mountains, including the Manzano Mountain Wilderness. The Mount Taylor Ranger District is in northern Cibola, southern McKinley, and western Sandoval counties in western New Mexico, and includes Mount Taylor and the Zuni Mountains.

Cibola biomes range from Chihuahuan desert to short grass prairie to piñon-juniper to sub-alpine spruce and fir. It offers an abundance of commercial and recreational opportunities including grazing, oil/gas, timber, picnicking, camping, skiing, hiking and mountain biking as well as the aerial Sandia Peak Tramway with a restaurant and skiing at the top. The region also boasts wildlife as diverse as the biomes they inhabit.

Due to the Rio Grande, a large variety of migrating waterfowl and other birds follow the river's flyway during the spring and fall. Birds of prey are also present using the updrafts and thermals along the north-south alignment of the central mountains for their migration. 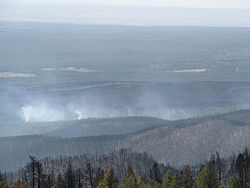 Trigo Fire burning in a canyon

In 2008 the Trigo Fire burned 13,709 acres (55.48 km2) mostly within the Mountainair Ranger District of the Cibola National Forest.