A VRLA battery (valve-regulated lead–acid battery) is a type of low-maintenance lead–acid rechargeable battery. Because of their construction, VRLA batteries do not require regular addition of water to the cells.[1] VRLA batteries are commonly further classified as:

The name "valve regulated" does not wholly describe the technology; these are really "recombinant" batteries, which means that the oxygen evolved at the positive plates will largely recombine with the hydrogen ready to evolve on the negative plates, creating water and so preventing water loss.[1] The valve is a safety feature in case the rate of hydrogen evolution becomes dangerously high. In flooded cells, the gases escape before they have a chance to recombine, so water must be periodically added.

One result of this design is a much higher ratio of power to "floorspace" than large, flooded type battery systems;[2] another is a high-rate power capacity, though of relatively short duration.[1] As a result, VRLA batteries are frequently employed in UPS (uninterruptible power supply) or other high-rate applications.[citation needed]

These batteries have a pressure relief valve which will activate when the battery is recharged at high voltage, typically greater than 2.30 volts per cell. (A 12-volt battery has six cells.) Valve activation allows some of the gas or electrolyte to escape, thus decreasing the overall capacity of the battery. Rectangular cells may have valves set to operate as low as 1 or 2 psi; round spiral cells, with metal external containers, can have valves set as high as 40 psi.[1]

The cell covers typically have gas diffusers built into them that allow safe dispersal of any excess hydrogen that may be formed during overcharge. They are not permanently sealed, but are maintenance free; and they can be oriented in any manner, unlike normal lead–acid batteries, which must be kept upright to avoid acid spills and to keep the plates' orientation vertical. Cells may be operated with the plates horizontal (pancake style), which may improve cycle life.[1]

VRLA cells may be made of flat plates similar to a conventional flooded lead–acid battery, or may be made in a spiral roll form to make cylindrical cells.

At high overcharge currents, electrolysis of water occurs, expelling hydrogen and oxygen gas through the battery's valves. Care must be taken to prevent short circuits and rapid charging. Constant-voltage charging is the usual, most efficient and fastest charging method for VRLA batteries, although other methods can be used.[1] VRLA batteries may be continually "float" charged at around 2.35 volts per cell at 25 °C. Some designs can be fast charged (1 hour) at high rates. Sustained charging at 2.7 V per cell will damage the cells. Constant-current overcharging at rates higher than C/3 will exceed the capacity of the cell to recombine hydrogen and oxygen.[1]

Compared with flooded lead–acid cells, VRLA batteries offer several advantages. The battery can be mounted in any position, since the valves only operate on over pressure faults. Since the battery system is designed to be recombinant and eliminate the emission of gases on overcharge, room ventilation requirements are reduced and no acid fume is emitted during normal operation. The volume of free electrolyte that could be released on damage to the case or venting is very small. There is no need (nor possibility) to check the level of electrolyte or to top up water lost due to electrolysis, reducing inspection and maintenance.[3] Compared to flooded batteries, VRLA batteries are more sensitive to high temperature environments and more vulnerable to thermal run-away during abusive charging conditions.[1] VRLA batteries also have higher charge efficiency, flooded cells convert 15–20% of the electrical energy into heat instead of potential power. Gel-cells lose 10–16% but AGMs as little as 4%. While flooded cells lose up to 1% per day due to self-discharge, VRLAs lose 1–3% per month. 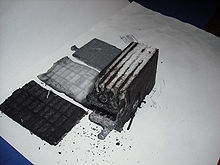 Absorbed glass mat (AGM) is a class of VRLA battery in which the electrolyte is held on the glass mat separator by way of capillary action.

The first AGM cell was the Cyclon, patented by Gates Rubber Corporation in 1972 and still produced now by Enersys. The cyclon is a spirally wound cell with thin lead foil electrodes. A number of manufacturers seized on the technology to implement it in cells with conventional flat plates. The first manufacturer to achieve a significant market position was arguably Yuasa of Japan. Their range of low capacity lightweight batteries achieved rapid take up in alarms and emergency lighting by about 1980 and also some acceptance for UPS and PABX support.

In the mid 1980s two UK companies, Chloride and Tungstone, simultaneously introduced 10 year life AGM batteries in capacities up to 400 Ah, stimulated by a British Telecom specification for batteries for support of new digital exchanges. In the same period, Gates acquired another UK company, Varley, specialising in aircraft and military batteries. Varley adapted the Cyclon lead foil technology to produce flat plate batteries with exceptional high rate output. These gained approval for a variety of aircraft including the BAe 125 and 146 business jets, the Harrier and its derivative the AV8B, and some F16 variants as the first alternatives to the normal NiCd batteries.

VRLA/AGM technology is now widespread in both stationary and vehicle batteries.

AGM batteries are just like flooded lead acid batteries, except the electrolyte is being held in the glass mats, as opposed to freely flooding the plates. Very thin glass fibers are woven into a mat to increase surface area enough to hold sufficient electrolyte on the cells for their lifetime. The fibers that compose the fine glass mat do not absorb nor are affected by the acidic electrolyte they reside in. These mats are wrung out 2–5% after being soaked in acids, prior to manufacture completion and sealing. The AGM battery can now accumulate more acid than is available, and never spill a drop.

The plates in an AGM battery may be any shape. Some are flat, others are bent or wound. AGM batteries, both deep cycle and starting, are built in a rectangular case to BCI battery code specifications. Optima Battery builds a patented cylindrical AGM series of batteries that are fashioned to fit the same BCI battery size specifications as any other battery.

All AGM batteries have enhancements over flooded lead acid batteries:

A gel battery (also known as a "gel cell") is a VRLA battery with a gelified electrolyte; the sulfuric acid is mixed with silica fume, which makes the resulting mass gel-like and immobile. Unlike a flooded wet-cell lead–acid battery, these batteries do not need to be kept upright. Gel batteries reduce the electrolyte evaporation, spillage (and subsequent corrosion issues) common to the wet-cell battery, and boast greater resistance to extreme temperatures, shock, and vibration. Chemically they are almost the same as wet (non-sealed) batteries except that the antimony in the lead plates is replaced by calcium, and gas recombination could take place. The modern Gel formulation and large scale production was from Otto Jache's and Heinz Schroeder's <US Patent 4,414.302> assigned to the German Co. Accumulatoranfabrik Sonnenschein GmbH . With gel electrolyte the separator was no longer such a critical, hard to make component. and cycle life was increased in some cases dramatically. With gel electrolyte a number of the shedding of active material failure problems were eliminated. More importantly real gas recombination was used to make batteries that were not "watered" and could be called maintenance free. The one-way valves were set at 2 psi. and this was high enough to have full recombination take place. At the end of charge when oxygen was evolved from overcharge on the positive plate It traveled through the shrink cracks in the gel directly to the Negative plate made from high surface area pure lead and "burned"(three phase catalytic sites—gas, liquid, and metal) up as fast as it was made. This oxygen gas and the hydrogen adsorbed on the surface of the sponge Lead metal Negative burned to make water that was retained in the cell and not vented as gas. This sealed /non-spill feature made it possible to make very small VRLA batteries (1 –12 Amp hr. range) that fit into the growing portable electronics market. A large market for inexpensive smaller sealed Pb/Acid batteries was generated quickly. Portable TV, light for news cameras, children's toy riding cars, emergency lighting, and the growing market for UPS systems for computer back-up, to name a few, were powered with small sealed VRLA.

Many modern motorcycles and ATVs on the market use AGM batteries to reduce likelihood of acid spilling during cornering, vibration, or after accidents, and for packaging reasons. The lighter, smaller battery can be installed at an odd angle if needed for the design of the motorcycle. Pedal bicycles also use these batteries for homebrew lighting.

Due to the higher manufacturing costs compared with flooded lead–acid batteries, AGM batteries are currently used on premium vehicles. As vehicles become heavier and equipped with more electronic devices such as navigation, stability control, and premium stereos, AGM batteries are being employed to lower vehicle weight and provide better electrical reliability compared with flooded lead–acid batteries.

New 5 series BMWs from March 2007 incorporate AGM batteries in conjunction with devices for recovering brake energy using regenerative braking and computer control to ensure the alternator charges the battery when the car is decelerating. Vehicles used in auto racing may use AGM batteries due to their vibration resistance.

AGM batteries are routinely chosen for remote sensors such as ice monitoring stations in the Arctic. AGM batteries due to their lack of free electrolyte will not crack and leak in these cold environments.

VRLA batteries are used extensively in power wheelchairs, as the extremely low gas and acid output makes them much safer for indoor use.

VRLA batteries are also the standard power source in sailplanes, due to their ability to withstand a variety of flight attitudes and a relatively large ambient temperature range with no adverse effects. Both AGM and Gel cells are commonly used in powered aerobatic aircraft, for the same reasons.