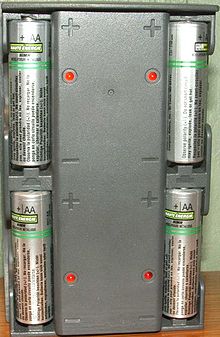 A simple charger equivalent to an AC/DC wall adapter. It applies 300mA to the battery at all times, which will damage the battery if left connected too long.

A battery charger is a device used to put energy into a secondary cell or rechargeable battery by forcing an electric current through it.

The charge current depends upon the technology and capacity of the battery being charged. For example, the current that should be applied to recharge a 12 V car battery will be very different from the current for a mobile phone battery.

The output of a timer charger is terminated after a pre-determined time. Timer chargers were the most common type for high-capacity Ni-Cd cells in the late 1990s for example (low-capacity consumer Ni-Cd cells were typically charged with a simple charger).

Timer based chargers also had the drawback that charging batteries that were not fully discharged, even if those batteries were of the correct capacity for the particular timed charger, would result in over-charging. 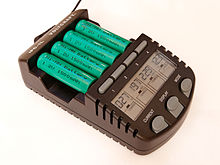 Example of a smart charger for AA and AAA batteries

The problem is, the magnitude of "delta-V" can become very small or even non-existent if (very) high[quantify] capacity rechargeable batteries are recharged.[citation needed] This can cause even an intelligent battery charger to not sense that the batteries are actually already fully charged, and continue charging. Overcharging of the batteries will result in some cases. However, many so called intelligent chargers employ a combination of cut off systems, which should prevent overcharging in the vast majority of cases.

A typical intelligent charger fast-charges a battery up to about 85% of its maximum capacity in less than an hour, then switches to trickle charging, which takes several hours to top off the battery to its full capacity.[2]

The most sophisticated types are used in critical applications e.g.: military or aviation batteries. These heavy-duty automatic “intelligent charging” systems can be programmed with complex charging cycles specified by the battery maker. The best are universal (i.e.: can charge all battery types), and include automatic capacity testing and analyzing functions too.

Some chargers use pulse technology in which a series of voltage or current pulses is fed to the battery. The DC pulses have a strictly controlled rise time, pulse width, pulse repetition rate (frequency) and amplitude. This technology is said to work with any size, voltage, capacity or chemistry of batteries, including automotive and valve-regulated batteries.[3] With pulse charging, high instantaneous voltages can be applied without overheating the battery. In a Lead–acid battery, this breaks down lead-sulfate crystals, thus greatly extending the battery service life.[4]

Several kinds of pulse charging are patented.[5][6][7] Others are open source hardware.[8]

Some chargers use pulses to check the current battery state when the charger is first connected, then use constant current charging during fast charging, then use pulse charging as a kind of trickle charging to maintain the charge.[9]

Inductive battery chargers use electromagnetic induction to charge batteries. A charging station sends electromagnetic energy through inductive coupling to an electrical device, which stores the energy in the batteries. This is achieved without the need for metal contacts between the charger and the battery. It is commonly used in electric toothbrushes and other devices used in bathrooms. Because there are no open electrical contacts, there is no risk of electrocution. 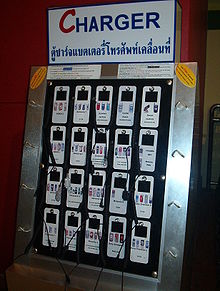 Since the Universal Serial Bus specification provides for a five-volt power supply, it is possible to use a USB cable as a power source for recharging batteries. Products based on this approach include chargers for cellular phones and portable digital audio players. They may be fully compliant USB peripheral devices adhering to USB power discipline, or uncontrolled in the manner of USB decorations.

Although portable solar chargers obtain energy from the sun only, they still can (depending on the technology) be used in low light (i.e. cloudy) applications. Portable solar chargers are typically used for trickle charging, although some solar chargers (depending on the wattage), can completely recharge batteries. The Kinesis K3 is a handheld charger for charging small personal devices like cellphones, gps's, digital cameras, gaming devices, etc. It contains a small wind generator, a small solar panel and batteries. The batteries can be charged by the panel, the wind generator or by connection to a power source (120V, 12V, or USB). It can then be used to recharge a small personal device.

Several companies have begun making devices that charge batteries based on regular human motion. One example, made by Tremont Electric, consists of a magnet held between two springs that can charge a battery as the device is moved up and down, such as when walking. Such products have not yet achieved significant commercial success.[13] 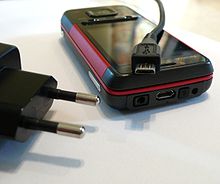 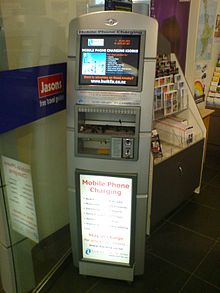 A charging station for various brands of mobile phones.

Most mobile phone chargers are not really chargers, only power adapters that provide a power source for the charging circuitry which is almost always contained within the mobile phone.[15] They are notoriously diverse, having a wide variety of DC connector-styles and voltages, most of which are not compatible with other manufacturers' phones or even different models of phones from a single manufacturer.

Users of publicly accessible charging kiosks must be able to cross-reference connectors with device brands/models and individual charge parameters and thus ensure delivery of the correct charge for their mobile device. A database-driven system is one solution, and is being incorporated into some designs of charging kiosks.

Mobile phones can usually accept a relatively wide range of voltages[citation needed], as long as it is sufficiently above the phone battery's voltage. However, if the voltage is too high, it can damage the phone. Mostly, the voltage is 5 volts or slightly higher, but it can sometimes vary up to 12 volts when the power source is not loaded.

There are also human-powered chargers sold on the market, which typically consists of a dynamo powered by a hand crank and extension cords. There are also solar chargers.

China, the European Commission and other countries are making a national standard on mobile phone chargers using the USB standard.[16] In June 2009, 10 of the world's largest mobile phone manufacturers signed a Memorandum of Understanding to develop specifications for and support a microUSB-equipped common External Power Supply (EPS) for all data-enabled mobile phones sold in the EU.[17][18] On October 22, 2009, the International Telecommunication Union announced a standard for a universal charger for mobile handsets (Micro-USB).[19]

There are two main types of charges for vehicles:

These vehicles include a battery pack, so generally use series charger.

EV converted electric vehicle battery chargers come in a variety of brands and characteristics. Zivan, Manzanita Micro, Elcon, Quick Charge, Rossco, Brusa, Delta-Q, Kelly, Lester and Soneil are the top 10 EV chargers in 2011 according to EVAlbum.com. These chargers vary from 1 KW to 7.5 KW maximum charge rate. Some use algorithm charge curves, others use constant voltage, constant current. Some are programmable by the end user through a CAN port, some have dials for maximum voltage and amperage, some are preset to specified battery pack voltage, amp-hour and chemistry. Prices range from $400 to $4500.[20].

A 10 Ampere-hour battery could take 15 hours to reach a fully charged state from a fully discharged condition with a 1 Ampere charger as it would require roughly 1.5 times the battery's capacity.

Rapid charging results in even faster recharge times and is limited only by available AC power and the type of charging system.[22]

On board EV chargers (change AC power to DC power to recharge the EV's pack) can be:

There is a list of public EV charging stations in the U.S.A. and worldwide[21]

Project Better Place is deploying a network of charging stations and subsidizing vehicle battery costs through leases and credits. 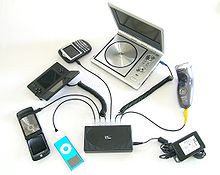 Auxiliary charger designed to fit a variety of proprietary devices

Researchers at the Korea Advanced Institute of Science and Technology (KAIST) have developed an electric transport system (called Online Electric Vehicle, OLEV) where the vehicles get their power needs from cables underneath the surface of the road via non-contact magnetic charging, (where a power source is placed underneath the road surface and power is wirelessly picked up on the vehicle itself. As a possible solution to traffic congestion and to improve overall efficiency by minimizing air resistance and so reduce energy consumption, the test vehicles followed the power track in a convoy formation[23]

A battery charger can work as a DC power adapter for experimentation. It may, however, require an external capacitor to be connected across its output terminals in order to "smooth" the voltage sufficiently, which may be thought of as a DC voltage plus a "ripple" voltage added to it. Note that there may be an internal resistance connected to limit the short circuit current, and the value of that internal resistance may have to be taken into consideration in experiments.

What practices are best depend on the type of battery. Nickel-based cells, such as NiMH[citation needed] and NiCd, need to be fully discharged occasionally, or else the battery loses capacity over time in a phenomenon known as "memory effect". Once a month (once every 30 charges) is sometimes recommended.[citation needed] This extends the life of the battery since memory effect is prevented while avoiding full charge cycles which are known to be hard on all types of dry-cell batteries, eventually resulting in a permanent decrease in battery capacity.

Most modern cell phones, laptops, and most electric vehicles use Lithium-ion batteries. These batteries last longest if the battery is frequently charged; fully discharging them will degrade their capacity relatively quickly.[24] When storing however, lithium batteries degrade more while fully charged than if they are only 40% charged. Degradation also occurs faster at higher temperatures. Degradation in lithium-ion batteries is caused by an increased internal battery resistance due to cell oxidation. This decreases the efficiency of the battery, resulting in less net current available to be drawn from the battery.[citation needed]

Internal combustion engine vehicles, such as boats, RVs, ATVs, motorcycles, cars, trucks, and more use lead–acid batteries. These batteries employ a sulfuric acid electrolyte and can generally be charged and discharged without exhibiting memory effect, though sulfation (a chemical reaction in the battery which deposits a layer of sulfates on the lead) will occur over time. Keeping the electrolyte level in the recommended range is necessary. When discharged, these batteries should be recharged immediately in order to prevent sulfation. These sulfates are electrically insulating and therefore interfere with the transfer of charge from the sulfuric acid to the lead, resulting in a lower maximum current than can be drawn from the battery. Sulfated lead acid batteries typically need replacing.

Lead–acid batteries will experience substantially longer life when a maintenance charger is used to "float charge" the battery. This prevents the battery from ever being below 100% charge, preventing sulfate from forming. Proper temperature compensated float voltage should be used to achieve the best results.[citation needed]