Measurement of sea ice is important for safety of navigation and for monitoring the environment, particularly the climate. Record keeping of direct observations began over a thousand years ago, but was sparse until the 1950s. Truly comprehensive records began with the satellite era in the late 1970s. Modern records include date about ice extent, ice area, concentration, thickness and the age of the ice. The trends in the records show a significant decline in Northern hemisphere sea ice and a very small, statistically insignificant increase in the winter Southern hemisphere sea ice.

Records assembled by Vikings showing the number of weeks per year that ice occurred along the north coast of Iceland date back to A.D. 870, but a more complete record exists since 1600. More extensive written records of Arctic sea ice date back to the mid-18th century. The earliest of those records relate to Northern Hemisphere shipping lanes, but records from that period are sparse. Air temperature records dating back to the 1880s can serve as a stand-in (proxy) for Arctic sea ice, but such temperature records were initially collected at only 11 locations. Russia’s Arctic and Antarctic Research Institute has compiled ice charts dating back to 1933. Today, scientists studying Arctic sea ice trends can rely on a fairly comprehensive record dating back to 1953, using a combination of satellite records, shipping records, and ice charts from several countries.[1]

In the Antarctic, data prior to the satellite record are even more sparse. To try to extend the historical record of Southern Hemisphere sea ice extent further back in time, scientists have been investigating two types of proxies for sea ice extent. One is records kept by Antarctic whalers since the 1930s that document the location of all whales caught. Because whales tend to congregate near the sea ice edge to feed, their locations could be a proxy for the ice extent. A second possible proxy is the presence of a phytoplankton-derived organic compound in Antarctic ice cores. Since phytoplankton grow most abundantly along the edges of the ice pack, the concentration of this sulfur-containing organic compound has been proposed as an indicator of how far the ice edge extended from the continent. Currently, however, only the satellite record is considered sufficiently reliable for studying Antarctic sea ice trends.[1] 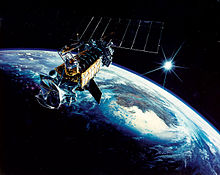 Since 1979, satellites have provided a consistent continuous record of sea ice.[3] Satellite images of sea ice are made from observations of microwave energy radiated from the Earth’s surface. Because ocean water emits microwaves differently than sea ice, ice “looks” different to the satellite sensor—see sea ice emissivity modelling. The observations are processed into digital picture elements, or pixels. Each pixel represents a square surface area on Earth. The first instruments provided approximately 25 kilometers by 25 kilometers resolution; later instruments higher. Algorithms examine the microwave emissions, and their vertical and horizontal polarisations, and estimate the ice area.[1]

The threshold–based approach may seem less accurate, but it has the advantage of being more consistent. When scientists are analyzing satellite data, it is easier to say whether there is or isn’t at least 15 percent ice cover in a pixel than it is to say, for example, whether the ice cover is 70 percent or 75 percent. By reducing the uncertainty in the amount of ice, scientists can be more certain that changes in sea ice cover over time are real.[1]

A careful analysis of satellite radar altimetry echoes can distinguish between those backscattered from the open ocean, new ice or multi-year ice. The difference between the elevation of the echoes from snow/sea ice and open water gives the elevation of the ice above the ocean; the ice thickness can computed from this.[4] The technique has a limited vertical resolution - perhaps 0.5m - and is easily confused by the presence of even small amounts of open water. Hence it has mostly been used in the Arctic, where the ice is thicker and more continuous.

Upward looking sonar (ULS) devices can be deployed under polar ice over a period of months or even years, and can provide a complete profile of ice thickness for a single site.

Auxiliary observations of sea ice are made from shore stations, ships, and from aircraft.

Although in recent years remotely sensed data has come to play a major role in sea ice analysis, it is not yet possible to compile a complete and accurate picture of sea ice conditions from this data source alone. Auxiliary sea ice observations play a major role in confirming remotely sensed ice information or providing important corrections to the overall picture of ice conditions.[10]

Sea Ice in the Arctic Ocean fluctuates with the seasons.

Sea ice extent is the area of sea with a specified amount of ice, usually 15%. To satellite microwave sensors, surface melt appears to be open water rather than water on top of sea ice. So, while reliable for measuring area most of the year, the microwave sensors are prone to underestimating the actual ice concentration and area when the surface is melting.[11]

To estimate ice area, scientists calculate the percentage of sea ice in each pixel, multiply by the pixel area, and total the amounts. To estimate ice extent, scientists set a threshold percentage, and count every pixel meeting or exceeding that threshold as “ice-covered.” The National Snow and Ice Data Center, one of NASA’s Distributed Active Archive Centers, monitors sea ice extent using a threshold of 15 percent.[1]

Sea ice concentration is the percentage of an area that is covered with sea ice.[1]

Sea ice thickness increases over time, and increases when winds and currents push the ice together. The European Space Agency's Cryosat-2 satellite was launched in April 2010 on a quest to map the thickness and shape of the Earth's polar ice cover. It's single instrument - a SAR/Interferometric Radar Altimeter is able to measure the difference between the height of the surface of sea ice and the water in open leads, the "freeboard" of the ice. Since 7/8ths of the ice is below the waterline, the computation of the thickness is fairly simple.[12]

The age of the ice is another key descriptor of the state of the sea ice cover, since older ice tends to be thicker and more resilient than younger ice. Sea ice rejects salt over time and becomes less salty resulting in a higher melting point.[2] A simple two-stage approach classifies sea ice into first year and multiyear ice. First-year is ice that has not yet survived a summer melt season, while multi-year ice has survived at least one summer and can be several years old.[13] See sea ice growth processes. 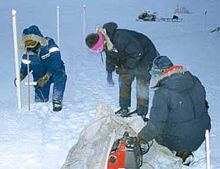 Sea mass balance is the balance of how much the ice grows in the winter and melts in the summer. For Arctic sea ice virtually all of the growth occurs on the bottom of the ice. Melting occurs on both the top and the bottom of the ice. In the vast majority of cases all of the snow melts during the summer, typically in just a couple of weeks. The mass balance is a powerful concept since it is the great integrator of the heat budget. If there is a net increase of heat, then the ice will thin. A net cooling will result in thicker ice.[14]

Making direct measurements of the mass balance is simple. An array of stakes and thickness gauges is used to measure ablation and accumulation of ice and snow at the top and bottom of the ice cover. In spite of the importance of mass balance measurements and the relatively simple equipment involved in making them, there are few observational results. This is due, in large part, to the expense involved in operating a long-term field camp to serve as the base for these studies.[14] 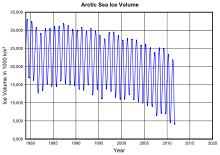 There are no Arctic-wide or Antarctic-wide measurements of the volume of sea ice, but the volume of the Arctic sea ice is calculated using the Pan-Arctic Ice Ocean Modeling and Assimilation System (PIOMAS) developed at the University of Washington Applied Physics Laboratory/Polar Science Center. PIOMAS blends satellite-observed sea ice concentrations into model calculations to estimate sea ice thickness and volume. Comparison with submarine, mooring, and satellite observations help increase the confidence of the model results.[16]

Cryosat-2, launched in April 2010, has the ability to measure thickness across the entire Arctic Ocean Basin. This allows relatively simple calculation of the volume of the sea ice.[12]

Trends in the data

Reliable and consistent records for all seasons are only available during the satellite era, from 1979 onwards.

Scientists use the 1979 to 2000 average because it provides a consistent baseline for year-to-year comparisons of sea ice extent.[2]

Records before the satellite era are sparse. William K. de la Mare, 1997, in Abrupt mid-twentieth-century decline in Antarctic sea-ice extent from whaling records[18] found a southwards shift in ice edge based on whaling records; these findings have been questioned, but later papers by de la Mare support the same conclusion.[19] 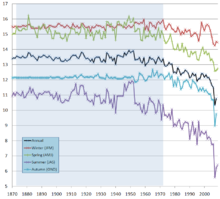 1870-2000 Northern hemisphere sea ice extent in million square kilometers. Blue shading indicates the pre-satellite era; data then is less reliable. In particular, the near-constant level extent in Autumn up to 1940 reflects lack of data rather than a real lack of variation.

According to scientific measurements, both the thickness and extent of summer sea ice in the Arctic have shown a dramatic decline over the past thirty years.[11]