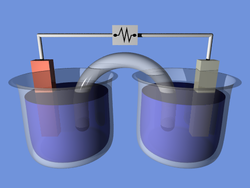 A demonstration electrochemical cell setup resembling the Daniell cell. The two half-cells are linked by a salt bridge carrying ions between them. Electrons flow in the external circuit.

An electrochemical cell is a device capable of either deriving electrical energy from chemical reactions, or facilitating chemical reactions through the introduction of electrical energy. A common example of an electrochemical cell is a standard 1.5-volt "battery". (Actually a single "Galvanic cell"; a battery properly consists of multiple cells, connected in either parallel or series pattern.) 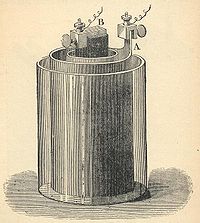 An electrochemical cell consists of two half-cells. Each half-cell consists of an electrode, and an electrolyte. The two half-cells may use the same electrolyte, or they may use different electrolytes. The chemical reactions in the cell may involve the electrolyte, the electrodes or an external substance (as in fuel cells which may use hydrogen gas as a reactant). In a full electrochemical cell, species from one half-cell lose electrons (oxidation) to their electrode while species from the other half-cell gain electrons (reduction) from their electrode. A salt bridge (e.g. filter paper soaked in KNO3) is often employed to provide ionic contact between two half-cells with different electrolytes—to prevent the solutions from mixing and causing unwanted side reactions. As electrons flow from one half-cell to the other, a difference in charge is established. If no salt bridge were used, this charge difference would prevent further flow of electrons. A salt bridge allows the flow of ions to maintain a balance in charge between the oxidation and reduction vessels while keeping the contents of each separate. Other devices for achieving separation of solutions are porous pots and gelled solutions. A porous pot is used in the Bunsen cell (right).

Cell potentials have a possible range of about zero to 6 volts. Cells using water-based electrolytes are usually limited to cell potentials less than about 2.5 volts, because the very powerful oxidizing and reducing agents which would be required to produce a higher cell potential tend to react with the water.

Primary electrochemical cells can produce current immediately on assembly. Disposable cells are intended to be used once and discarded. Disposable primary cells cannot be reliably recharged, since the chemical reactions are not easily reversible and active materials may not return to their original forms.

Common types of disposable cells include zinc-carbon cells and alkaline cells. Generally, these have higher energy densities than rechargeable cells,[3] but disposable cells do not fare well under high-drain applications with loads under 75 ohms (75 Ω).[4]

The oldest form of rechargeable cell is the lead-acid cell.[5] This electrochemical cell is notable in that it contains a liquid in an unsealed container, requiring that the cell be kept upright and the area be well ventilated to ensure safe dispersal of the hydrogen gas produced by these cells during overcharging. The lead-acid cell is also very heavy for the amount of electrical energy it can supply. Despite this, its low manufacturing cost and its high surge current levels make its use common where a large capacity (over approximately 10Ah) is required or where the weight and ease of handling are not concerns.

An improved type of liquid electrolyte cell is the sealed valve regulated lead acid (VRLA) cell, popular in the automotive industry as a replacement for the lead-acid wet cell. The VRLA cell uses an immobilized sulphuric acid electrolyte, reducing the chance of leakage and extending shelf life.[6] VRLA cells have the electrolyte immobilized, usually by one of two means:

Other portable rechargeable cells are (in order of increasing power density and cost): nickel-cadmium cells (NiCd), nickel metal hydride cells (NiMH), and lithium-ion cells(Li-ion).[7] By far, Li-ion has the highest share of the dry cell rechargeable market.[8] Meanwhile, NiMH has replaced NiCd in most applications due to its higher capacity, but NiCd remains in use in power tools, two-way radios, and medical equipment.[8]