Nickel oxyhydroxide battery (abb. NiOx) is a type of primary cell (non-rechargeable). NiOx batteries excel in high-drain applications such as digital cameras, and in this role, they can provide up to twice the life of an alkaline battery.[1]

NiOx batteries of this chemistry are sold under brand names such as Duracell Power Pix and Panasonic Oxyride.

NiOx batteries used in low-drain applications, have a lifespan similar to a premium alkaline battery.[citation needed] NiOx batteries produce a higher voltage (1.7V) than alkaline batteries (1.5V) which can cause problems in certain products, such as equipment with incandescent light bulbs (such as flashlights/torches), or devices without a voltage regulator. 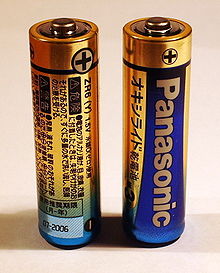 The nickel oxyhydroxide cell is different from a standard alkaline battery in the manufacturing process and in chemical composition.

The chemical difference is the addition of nickel oxyhydroxide to the manganese dioxide and graphite for the cathode. This results in an unloaded voltage of 1.7 V DC per cell. The cells sustain a higher average voltage during discharge compared to alkaline batteries. This may cause a false indication in equipment that monitors battery voltage as an indication of remaining operating time.[2]

Finer grained graphite in the cathode and a vacuum pouring process that inserts a higher quantity of electrolyte in the cell are used during the manufacturing of the nickel oxyhydroxide cells.[1]

Panasonic has promoted their brand with a number of marketing stunts. In August 2007, 192 Oxyride AA batteries powered a car that reached a top speed of 122 km/hour, (75.81Mph) getting into the Guinness World Records. [1]

Rechargeable nickel–zinc batteries use the same chemistry. In the 1920s and 1930s, a rechargeable form of zinc-nickel oxyhydroxide battery was manufactured, but it had poor cycle life.[3]