National University of Sciences and Technology, or NUST, is a public university that was founded by the government of Pakistan in 1981 to train members of the Pakistani Armed Forces after merging established military institutes and colleges.[2] It was chartered in 1993.[2][3][4] NUST is a multi-school university with its headquarters initially located in Rawalpindi, Pakistan. In 2008, the headquarters were shifted to the newly constructed campus in Islamabad. Other campuses are situated in Karachi, Rawalpindi and Risalpur.

The university is co-educational, established to promote higher scientific education in the country especially in the field of sciences and technology. It offers undergraduate and postgraduate degrees leading to Ph.D in the fields of engineering, information technology, medical sciences, and management sciences. NUST is affiliated with Pakistan Engineering Council and Higher Education Commission Pakistan.[5][6] In 2009, NUST was ranked as 350th best University in the world by THES World University Rankings.[7] It is also the only Pakistani university among the top 100 Asian universities (QS Ranking, 2011).

To train the members of the Pakistan Air Force, the College of Aeronautical Engineering (CAE) was established at Korangi Creek, Karachi in 1965. In 1969, EME School was given the status of college and civilians were admitted. In 1976, the College of Medical Sciences was established as the Army Medical College (AMC) and a year later in 1977 the first MBBS course started there. In the same year the School of Signals was upgraded to a college. In 1981 a BSc program started at CEME giving it the status of a university and a few years later in April 1984 CEME moved to its current location in Rawalpindi from Quetta. In May 1986, CAE was shifted to the PAF Academy in Risalpur.

NUST was established in 1991 by pooling together military and civil educational resources. After its development, existing military schools and colleges became constituent colleges of NUST. The first college to be affiliated with NUST was MCS in 1991. In 1993, the university was granted a charter and CEME and MCE became part of the university. In December 1994 and November 1995, CAE and PNEC became constituents of NUST respectively. All the constituent colleges were upgraded, in September 1997 MS program was started at CAE, in 1998 MS program was started at PNEC and in the same year Bachelor of Dental Surgery was started at AMC. In 1999, CEME and CAE attained ISO 9001 Certification, School of Electrical Engineering and Computer Sciences (SEECS) was launched in Islamabad, and NUST Business School (then known as NIMS) was established.

In 2003, CEME received ISO 9001-2000 certification. In the same year, the Center for Cyber Technology and Spectrum Management was launched in Islamabad. In May 2004, the Center for Advanced Mathematics and Physics was created. A Ph.D program started at CEME in 2006. In 2007, the Center of Virology and Immunology was developed to increase research in the field of medical sciences in Pakistan. In 2008, a new campus was developed in Islamabad. Some old colleges are being shifted to this campus and new schools are being developed such as School of Civil and Environmental Engineering, School of Chemical and Materials Engineering, School of Mechanical and Manufacturing Engineering, and Research Center for Modeling and Simulation.

NUST is the first model university established by the Ministry of Science and Technology like KAIST of Korea.[2] The student body consists of 7,000+ students, including 102 international students and 884 postgraduate students. In 2009, 34,000 candidates applied for the undergraduate program at NUST. NUST has 675 full time employed faculty staff including 17 members from international universities, and many professors and lecturers are a part of visiting faculty of NUST. In addition to this, professors from universities around the world visit NUST under collaborative arrangements.

Admission to engineering undergraduate courses in NUST is granted through written entrance examinations, while admission to medical, business, master and PhD programs is based primarily on an interview along with a written test in most cases. The basic requirement for admission in undergraduate program is FSc Pre-Engineering from any Board of Intermediate and Secondary Education or any equivalent qualification (like Overseas High School Certificate, British Advanced Level of Certificate, International Baccalaureate etc.). Minimum 60% marks is required in each Matriculation and FSc/Equivalent Exam. Students can also apply on the basis of their SAT scores, however admissions on the basis of SAT have reserved seats. NUST has reserved seats in most of the disciplines for students applying from abroad. International students can apply only on the basis of their SAT I and SAT II scores.

Financial aid is offered to bright students who are financially handicapped and from backward areas. Financial incentives for the high achievers in undergraduate programs is awarded to about 25% of students on performance and need basis. Students who secure top positions in each discipline in the NUST admission test are not required to pay any tuition fee during first semester on joining in that discipline. Remaining students in each discipline are given financial assistance worked out as per their merit for first semester on joining. Apart from that the students who maintains a GPA of 3.5 and above in subsequent semesters get financial assistance within the range of 15-75% of their tuition fees. Students directly admitted in PhD program in IT related disciplines are given scholarships from Endowment Fund and Mega Project Fund.

A Research and Development (R&D) Directorate is established at the NUST headquarters which encourages the growth of research in the university. All efforts of R&D Directorate are coordinated through an organizational structure consisting of NUST headquarters, R&D Cells at each constituent college, and NUST's commercial arms (Technology Incubation Center and NUST Consulting).[9][10]

Each college, institute, and center has an R&D Cell headed by a PhD qualified faculty member who co-ordinates, monitors and records all the R&D activities of the college. The head coordinates all the activities among departments, faculty members, researchers, students, and industries identifying potential projects and sources of funds.

NUST Consulting helps researchers undertake consultancy services with external agencies. In this regard, all centers are y involved with NC to improve efficiency, reduce of wastage, increase productivity, and improve quality.[9]

NUST has established a Technology Incubation Center with an aim to combine industrial development and technological research together and establish the linkages between institutes and the industry. TIC will also help faculty members in identifying the end users apart from commercializing of R&D output.[10]

All centers and faculty members involved in research liase with industrial setups. The new campus established in Islamabad is co-located with Tech Town in Sector I-12, where IT and electronics related industries and Technology Parks are planned to be set up, so as to promote university and industry linkages.[11] Apart from this, NUST is providing training and consultancy services to the industry and other business organizations.[10]

NUST has also bought lab equipment needed for doctoral and postdoctoral research work, with financing through Islamic Development Bank (IDB). IDB has provided 26 US$ as grant for buying the services of researchers from abroad, over and above the programs of Ministry of Science and Technology, Pakistan.[12]

According to a survey, NUST is the most popular choice for engineering students in Pakistan.[13]

NUST was the first university in Pakistan to achieve ISO 9000 certification. The constituent colleges that have been certified for ISO Quality Management System include College of Aeronautical Engineering, College of Civil Engineering, College of Electrical and Mechanical Engineering, Pakistan Navy Engineering College and College of Telecommunication.[1] NUST won two gold and a silver medal out of three gold and three silver medals awarded by the Pakistan Engineering Council for 2005, 2006 and, 2007 for Best Graduate of the Year Award.[1] NUST faculty members won seven awards, including President's Gold Medal, Best Researcher, Distinguished Scientist and Best University Teacher awards during 2007.[1]

NUST is a multi-campus university, with the headquarters located in Islamabad. Campuses of NUST are located in the following cities:

AMC is also known as the College of Medical Sciences and is located on Abid Majid Road in Rawalpindi. Separate computer labs are available for both post-graduate and undergraduate students. Other facilities in the campus include a library, cafeteria, college mosque, swimming pool, gym, squash court, and auditorium. There are seven hostels for male and female students near the college campus.

Located on Grand Trunk Road in Rawalpindi, EME is the largest constituent college of NUST. The campus includes all on-campus facilities, auditorium and conference hall, accommodation and mess facilities. The library is fully computerized, with a collection of 70,000 volumes.

Sports facilities at EME includes three tennis courts, a basketball court, a squash court, a badminton court, and a gymnasium.

Located on Hamayun Road in Rawalpindi Cantt, it is the oldest constituent college of NUST, founded in 1947 after the independence of Pakistan to train the members of Pakistan Armed Forces. The College of Telecommunication Engineering is located on this campus. The MCS library is computerized, with over 55,000 volumes.

The campus is equipped with a library, auditorium, conference hall, dining facilities, and hostel facilities. The college library has a collection of 80,000 technical and reference books. Sports facilities at the campus include table tennis, badminton, basketball, tennis, volleyball, football, hockey, and cricket.

College of Civil Engineering and National Institute of Transportation are located in this campus. MCE is one of the oldest constitute colleges of NUST, founded in 1948. The campus houses laboratories, a computer center, library with 41,000 books, sports facilities, and hostels. 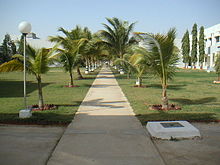 The college campus is spread over an area of about 75 acres (300,000 m2) comprising the administration block, four academic blocks, postgraduate studies center, labs and workshops, professional development center, an auditorium, a mosque, a dispensary, hostel and dining facilities. The campus is home to the Computer Aided Designing and Manufacturing Center and the Professional Development Center.

The campus has a library. A section known as the "Book Bank" stocks used textbooks, loaning them out to undergraduate students for a whole semester, charging 10% of the original cost of the book.

The campus in Sector H-12 Islamabad was initiated in 2008. Besides NUST Headquarters, the schools and institutes that were relocated to this campus include School of Civil and Environmental Engineering, School of Mechanical and Manufacturing Engineering, NUST School of Electrical Engineering and Computer Science, School of Chemical and Materials Engineering (SCME), Research Center for Modeling and Simulation (RCMS), Center for Advanced Mathematics and Physics (CAMP), NUST Center of Virology and Immunology, NUST Business School (NBS), Professional Development Center (PDC), Technology Incubation Center, Marketing and Industrial Relations Organization, NUST Publishing, and NUST Outreach and Talent Hunt Initiative.

NUST has the following international collaborations:[1]

The institute offers opportunities for students to participate in technical and professional societies. Study trips to industries and organizations are arranged, guest speakers from institutes and industry are invited and seminars and workshops are held. Sports facilities are available in all campuses.

All the campuses have their own sports facilities. Courts for indoor games and activities such as table tennis, badminton, and squash are available in almost all campuses. Tennis, basketball and volleyball courts, hockey, football and cricket grounds are also present in all the main campuses. Some colleges have swimming pools and gymnasiums.

Separate hostels for boys and girls are available in most colleges and is at various stages of completion in the rest. Students of CAE are provided separate accommodations, while students at MCS, CEME and AMC are placed in the newly constructed dormitories at the campus. Pakistan Navy Engineering College has sufficient hostel facilities for both male and female students. Dining and mess facilities are located in all campuses.