pronunciation) Genshiryoku Hatsudensho?, Fukushima I NPP), also known as Fukushima Dai-ichi (dai-ichi means "number one"), is a disabled nuclear power plant located on a 3.5-square-kilometre (860-acre) site[1] in the towns of Okuma and Futaba in the Futaba District of Fukushima Prefecture, Japan. First commissioned in 1971, the plant consists of six boiling water reactors (BWR). These light water reactors[2] drove electrical generators with a combined power of 4.7 GWe, making Fukushima Daiichi one of the 15 largest nuclear power stations in the world. Fukushima I was the first nuclear plant to be constructed and run entirely by the Tokyo Electric Power Company (TEPCO).[3] The plant suffered major damage from the 9.0 earthquake and subsequent tsunami that hit Japan on March 11, 2011 and is not expected to reopen. The earthquake and tsunami disabled the reactor cooling systems, leading to nuclear radiation leaks and triggering a 30 km evacuation zone surrounding the plant. On April 20, 2011, the Japanese authorities declared the 20 km evacuation zone a no-go area which may only be entered under government supervision.

The Fukushima II Nuclear Power Plant, or Fukushima Dai-ni, is located to the south and also run by TEPCO. 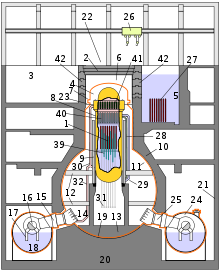 The reactors for Units 1, 2, and 6 were supplied by General Electric, those for Units 3 and 5 by Toshiba, and Unit 4 by Hitachi. All six reactors were designed by General Electric.[4][5] Architectural design for General Electric's units was done by Ebasco. All construction was done by Kajima.[6] Since September 2010, Unit 3 has been fueled by a small fraction (6%)[7] of mixed-oxide (MOX) fuel, rather than the low enriched uranium (LEU) used in the other reactors.[8][9] Units 1–5 were built with Mark I type (light bulb torus) containment structures.[10][11] The Mark I containment structure was slightly increased in volume by Japanese engineers.[12] Unit 6 has a Mark II type (over/under) containment structure.[10][11][13]

Unit 1 is a 460 MW boiling water reactor (BWR-3) constructed in July 1967. It commenced commercial electrical production on March 26, 1971, and was initially scheduled for shutdown in early 2011.[14] In February 2011, Japanese regulators granted an extension of ten years for the continued operation of the reactor.[15] It was damaged during the 2011 Tōhoku earthquake and tsunami.[16]

The reactor's emergency diesel generators and DC batteries, crucial components in helping keep the reactors cool in the event of a power loss, were located in the basements of the reactor turbine buildings. The reactor design plans provided by General Electric specified placing the generators and batteries in that location, but mid-level engineers working on the construction of the plant were concerned that this made the back up power systems vulnerable to flooding. TEPCO elected to strictly follow General Electric's design in the construction of the reactors.[20]

The location of the plant was on a bluff which was originally 35-meters above sea level. During construction, however, TEPCO lowered the height of the bluff by 25-meters. One reason the bluff was lowered was so that the base of the reactors could be constructed on solid bedrock to mitigate the threat posed by earthquakes. Another reason was the lowered height would keep the running costs of the seawater pumps low. TEPCO did not factor in the tsunami risk when planning the site's construction. Therefore, the lowered height would result in the plant being more vulnerable to tsunami.[21]

The Fukushima Daiichi site is divided into two reactor groups, the leftmost group when viewing from the ocean contains units 4,3,2 and 1 going from left to right. The rightmost group when viewing from the ocean contains the newer units 5 and 6, respectively the positions from left to right. A set of seawalls protrude into the ocean, with the water intake in the middle and water discharge outlets on either side.

Units 7 and 8 were planned to start construction in April 2012 and 2013 and to come into operation in October 2016 and 2017 respectively. The project was formally canceled by TEPCO in April 2011 after local authorities questioned the fact that they were still included in the supply plan for 2011, released in March 2011, after the accidents. The company stated that the plan had been drafted before the earthquake.[22]

The Fukushima Daiichi plant is connected to the power grid by four lines, the 500 kV Futaba Line (双葉線), the two 275 kV Ōkuma Lines (大熊線) and the 66 kV Yonomori line (夜の森線) to the Shin-Fukushima (New Fukushima) substation.

The Shin-Fukushima substation also connects to the Fukushima Daini plant by the Tomioka Line (富岡線). Its major connection to the north is the Iwaki Line (いわき幹線), which is owned by Tohoku Electric Power. It has two connections to the south-west that connect it to the Shin-Iwaki substation (新いわき).

The plant reactors came online from 1970 through 1979. From the end of 2002 through 2005, the reactors were among those shut down for a time for safety checks due to the TEPCO data falsification scandal.[26][27] On Feb 28, 2011 TEPCO submitted a report to the Japanese Nuclear and Industrial Safety Agency admitting that the company had previously submitted fake inspection and repair reports. The report revealed that TEPCO failed to inspect more than 30 technical components of the six reactors, including power boards for the reactor's temperature control valves, as well as components of cooling systems such as water pump motors and emergency power diesel generators.[28] In 2008, the IAEA warned Japan that the Fukushima was built using outdated safety guidelines, and could be a "serious problem" during a large earthquake.[29] The warning led to the building of an emergency response center in 2010, used during the response to the 2011 nuclear accident.[29][30]

On 4 April 2011, TEPCO vice president Takashi Fujimoto announced that the company was canceling plans to build Reactors No. 7 and 8.[31][32] On May 20 TEPCO's board of directors' officially voted to decommission Units 1 through 4 of the Fukushima Daiichi nuclear power plant and to cancel plans to build units 7 and 8. It refused however to make a decision regarding units 5 and 6 of the station or units 1 to 4 of the Fukushima Daini nuclear power station until a detailed investigation is made. It said in the interim it will work to preserve these reactors in the state of cold shutdown. 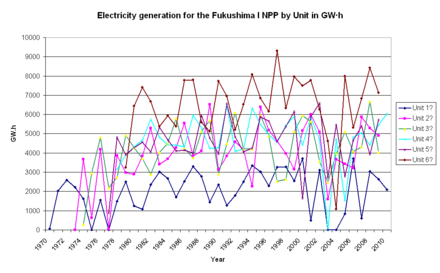 Electricity generation for the Fukushima I

In 1990 the US Nuclear Regulatory Commission (NRC) ranked the failure of the emergency electricity generators and subsequent failure of the cooling systems of plants in seismically very active regions one of the most likely risks. The Japanese Nuclear and Industrial Safety Agency (NISA) cited this report in 2004. According to Jun Tateno, a former NISA scientist, TEPCO did not react to these warnings and did not respond with any measures.[33]

Film maker Adam Curtis mentioned the risks of the type of boiling water reactors cooling systems such as those in Fukushima I,[34] and claimed the risks were known since 1971[35] in a series of documentaries in the BBC in 1992 and advised that PWR type reactors should have been used. 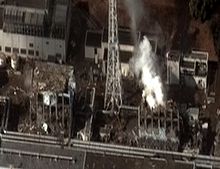 Three of the reactors at Fukushima Daiichi overheated, causing meltdowns that eventually led to explosions, which released large amounts of radioactive material into the air.[41]

On 11 March 2011 an earthquake categorised as 9.0 MW on the moment magnitude scale occurred at 14:46 Japan Standard Time (JST) off the northeast coast of Japan. Units 4, 5 and 6 had been shut down prior to the earthquake for planned maintenance.[42][43] The remaining reactors were shut down automatically after the earthquake, and the remaining decay heat of the fuel was being cooled with power from emergency generators. The subsequent destructive tsunami with waves of up to 14 meters (the reactors were designed to handle up to 6 meters) disabled emergency generators required to cool the reactors. Over the following three weeks there was evidence of partial nuclear meltdowns in units 1, 2 and 3: visible explosions, suspected to be caused by hydrogen gas, in units 1 and 3; a suspected explosion in unit 2, that may have damaged the primary containment vessel; and a possible uncovering of the units 1, 3 and 4 spent fuel pools.[44] Radiation releases caused large evacuations, concern about food and water supplies, and treatment of nuclear workers.[45][46][47]

The events at units 1, 2 and 3 have been rated at Level 7 (major release of radioactive material with widespread health and environmental effects r­equiring implementation of planned and extended countermeasures) on the International Nuclear Event Scale, and those at unit 4 as Level 3 (Serious Incident) events.[48]

On 3 April 2011, two bodies were discovered in the basement turbine room most likely because the workers ran there during the tsunami.[49]