The Nuclear Regulatory Commission (NRC) is an independent agency of the United States government that was established by the Energy Reorganization Act of 1974 from the United States Atomic Energy Commission, and was first opened January 19, 1975. The NRC oversees reactor safety and security, reactor licensing and renewal, radioactive material safety, security and licensing, and spent fuel management (storage, security, recycling, and disposal). Some observers have criticized the Commission as an example of regulatory capture[1][2][3] and the NRC has been accused of doing an inadequate job by the Union of Concerned Scientists.[4]

The NRC's mission is to regulate the nation's civilian use of byproduct, source, and special nuclear materials to ensure adequate protection of public health and safety, to promote the common defense and security, and to protect the environment. The NRC's regulatory mission covers three main areas:

The NRC is headed by five Commissioners appointed by the President of the United States and confirmed by the United States Senate for five-year terms. One of them is designated by the President to be the Chairman and official spokesperson of the Commission. The current chairman is Gregory B. Jaczko. He was first sworn in as a Commissioner on Jan. 21, 2005, and his term runs through June 2013. He was designated Chairman of the U.S. Nuclear Regulatory Commission by President Barack Obama on May 13, 2009.

The NRC was one component of the United States Atomic Energy Commission prior to 1975. When the U.S. AEC became the Energy Research and Development Administration in 1975, the NRC was formed as an independent commission to take over the role of oversight of nuclear energy matters, oversight of nuclear medicine, and nuclear safety. The development and oversight of nuclear weapons was transferred to the National Nuclear Security Administration, a subcomponent of ERDA. Research and promotion of civil uses of radioactive materials, such as for nuclear non-destructive testing, nuclear medicine, and nuclear power, was split into the Office of Nuclear Energy, Science & Technology within ERDA by the same act. (In 1977, ERDA became the United States Department of Energy).

Currently Headquartered in Rockville, Maryland, the NRC previously had five regions. In the late 1990s, the Region V office in Walnut Creek, California was absorbed into Region IV and Region V was dissolved. The NRC is broken down into 4 regions:

Map of the NRC Regions 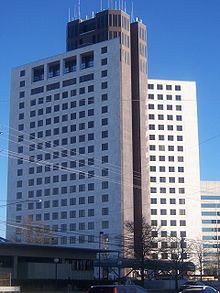 Terrorist attacks such as those executed by Al-Qaeda in New York on September 11, 2001 and in London on July 7, 2005 have prompted fears that extremist groups might use radioactive dirty bombs in further attacks in the United States and elsewhere.[7][8][9] In March 2007, undercover investigators from the Government Accountability Office set up a false company and obtained a license from the Nuclear Regulatory Commission that would have allowed them to buy the radioactive materials needed for a dirty bomb. According to the GAO report, NRC officials did not visit the company or attempt to personally interview its executives. Instead, within 28 days, the NRC mailed the license to the West Virginia postal box. Upon receipt of the license, GAO officials were able to easily modify its stipulations, and remove a limit on the amount of radioactive material they could buy. A spokesman for the NRC said that the agency considered the radioactive devices a "lower-level threat"; a bomb built with the materials could have contaminated an area about the length of a city block, but would not have presented an immediate health hazard.[9]

The Atomic Energy Commission was dissolved because it was perceived as unduly favoring the industry it was charged with regulating, and the NRC "seems to have fallen into the same trap".[10] A 1987 Congressional report entitled "NRC Coziness with Industry" concluded that the NRC "has not maintained an arms length regulatory posture with the commercial nuclear power industry... [and] has, in some critical areas, abdicated its role as a regulator altogether".[10] To cite just three examples:

A 1986 Congressional report found that NRC staff had provided valuable technical assistance to the utility seeking an operating license for the controversial Seabrook plant. In the late 1980s, the NRC 'created a policy' of non-enforcement by asserting its discretion not to enforcement with license conditions; between September 1989 and 1994, the 'NRC has either waived or chosen not to enforce regulations at nuclear power reactors over 340 times'. Finally, critics charge that the NRC has ceded important aspects of regulatory authority to the industry's own Institute for Nuclear Power Operations (INPO), an organization formed by utilities in response to the Three Mile Island Accident.[10]

According to Byrne and Hoffman, since the 1980s the NRC has generally favored the interests of nuclear industry and has been unduly responsive to industry concerns. The NRC has often failed to pursue tough regulation. At the same time, it has sought to hamper or deny public access to the regulatory process and created new barriers to public participation.[11]

According to Frank N. von Hippel, despite the 1979 Three Mile Island accident in Pennsylvania, the NRC has often been too timid in ensuring that America’s 104 commercial reactors are operated safely:

Nuclear power is a textbook example of the problem of “regulatory capture” — in which an industry gains control of an agency meant to regulate it. Regulatory capture can be countered only by vigorous public scrutiny and Congressional oversight, but in the 32 years since Three Mile Island, interest in nuclear regulation has declined precipitously.[12]

There are many forms of regulatory failure, including regulations on the books which lie dormant by the common consent of regulators and industry:

A worker (George Galatis) at the Millstone nuclear power plant in Connecticut kept warning management that the spent fuel rods were being put too quickly into the spent storage pool and that the number of rods in the pool exceeded specifications. Management ignored him, so he went directly to the NRC, which eventually admitted that it knew of both of the forbidden practices, which happened at many plants, but chose to ignore them. The whistleblower was fired and blacklisted.[13]

In 2007, Barack Obama, then running for president, said that the five-member Nuclear Regulatory Commission had become "captive of the industries that it regulates"[3] and a nuclear policy analyst at Greenpeace USA has called the agency approval process a "rubber stamp".[14]

In Vermont, the day before the 2011 Tōhoku earthquake and tsunami that damaged Japan's Fukushima Daiichi Nuclear Power Plant, the NRC approved a 20-year extension for the license of Vermont Yankee Nuclear Power Plant, although the Vermont state legislature voted overwhelmingly to deny an extension.[14] The plant had been found to be leaking radioactive materials through a network of underground pipes, which Entergy had denied under oath even existed. Tony Klein, chairman of the Vermont House Natural Resources and Energy Committee asked the NRC about the pipes at a hearing in 2009 and the NRC did not even know they existed.[14]

On March 17, 2011, the Union of Concerned Scientists (UCS) released a study critical of the NRC's 2010 performance as a regulator. The UCS said that over the years, it had found the NRC's enforcement of safety rules has not been “timely, consistent, or effective" and it cited 14 "near-misses" at U.S. plants in 2010 alone.[15]

In April 2011, Reuters reported that the NRC exists to police, not promote, the domestic nuclear industry -- but diplomatic cables show that it is sometimes used as a sales tool to help push American technology to foreign governments, when "lobbying for the purchase of equipment made by Westinghouse and other domestic manufacturers". This gives the appearance of a regulator which is acting in a commercial capacity, "raising concerns about a potential conflict of interest".[16]

San Clemente Green, an environmental group opposed to the continued operation of the San Onofre Nuclear Plant, says that instead of being a watchdog, the NRC too often rules in favor nuclear plant operators.[17]

Edward J. Markey, Democrat of Massachusetts, has been a longtime critic of the Nuclear Regulatory Commission. He has been critical of the NRC's decision-making on the proposed Westinghouse AP1000 reactor design and the NRC response to the Fukushima Daiichi nuclear disaster.[18][19]

In July 2011, Mark Cooper said that the Nuclear Regulatory Commission is "on the defensive to prove it is doing its job of ensuring safety".[20]

In October 2011, Gregory B. Jaczko, chairman of the Nuclear Regulatory Commission, described "a tension between wanting to move in a timely manner on regulatory questions, and not wanting to go too fast".[21]

A total of 45 groups and individuals from across the nation are formally asking the NRC to immediately suspend all licensing and other activities at 21 proposed nuclear reactor projects in 15 states until the NRC completes a thorough post-Fukushima reactor crisis examination:[22][23]

The petitioners also are asking the NRC to supplement its own investigation by establishing an independent commission comparable to that set up in the wake of the serious, though less severe, 1979 Three Mile Island accident. The petitioners include Public Citizen, Southern Alliance for Clean Energy, and San Luis Obispo Mothers for Peace.[22]

Nuclear safety rules in the United States do not adequately weigh the risk of a single event that would knock out electricity from the grid and from emergency generators, as a quake and tsunami recently did in Japan, Nuclear Regulatory Commission officials said in June 2011.[24]

In October 2011, the Nuclear Regulatory Commission instructed agency staff to move forward with seven of the 12 safety recommendations put forward by the federal task force in July. The recommendations include "new standards aimed at strengthening operators’ ability to deal with a complete loss of power, ensuring plants can withstand floods and earthquakes and improving emergency response capabilities". The new safety standards will take up to five years to fully implement.[25]

In November 2011, U.S. Nuclear Regulatory Commissioner Gregory Jaczko warned power companies against complacency and said the agency must "push ahead with new rules prompted by a nuclear crisis in Japan while also resolving long-running issues involving fire protection and a new analysis of earthquake risks".[26]