Ōe was awarded the Nobel Prize in Literature in 1994 for creating "an imagined world, where life and myth condense to form a disconcerting picture of the human predicament today."[1]

Ōe was born in Ōse (大瀬村, Ōse-mura?), a village now in Uchiko, Ehime Prefecture on the island of Shikoku in Japan. He was the third son of seven children. Ōe's grandmother taught him art and oral performance. His grandmother died in 1944, and later that year, Ōe's father died in the Pacific War. Ōe's mother took over his father's role as educator. The books she bought him - The Adventures of Huckleberry Finn and The Wonderful Adventures of Nils - left him with an impression Ōe says 'he will carry to the grave'.[citation needed]

After attending local school, Ōe transferred to a high school in Matsuyama. At the age of 18, he made his first trip to Tokyo and in the following year began studying French Literature at Tokyo University under the direction of Professor Kazuo Watanabe, a specialist on François Rabelais. He began publishing stories in 1957 while still a student, strongly influenced by contemporary writing in France and the United States.

He married in February 1960. His wife, Yukari, was the daughter of film director Mansaku Itami and sister of film director Juzo Itami. The same year he met Mao Zedong on a trip to China. He also went to Russia and Europe the following year, visiting Sartre in Paris.

Ōe now lives in Tokyo. He has three children; the eldest son, Hikari, has been brain-damaged since his birth in 1963, and his disability has been a recurring motif in Ōe's writings since then.

In 2004, Ōe lent his name and support to those opposing proposed changes in the post-war Japanese constitution of 1947. His views were seen as controversial by those who wanted Japan to abandon the constitutional impediment to "the threat or use of force as a means of settling international disputes," which is explicitly renounced in Article 9.[2]

In 2005, two retired Japanese military officers sued Ōe for libel for his 1970 essay, Okinawa Notes, in which he had written that members of the Japanese military had coerced masses of Okinawan civilians into committing suicide during the Allied invasion of the island in 1945. In March 2008, the Osaka District Court dismissed all charges against Ōe. In this ruling, Judge Toshimasa Fukami stated, "The military was deeply involved in the mass suicides". In a news conference following the trial, Ōe said, "The judge accurately read my writing."[3]

Oe has been involved with pacifist and anti-nuclear campaigns and written books about the atomic bombings of Hiroshima and Nagasaki. Following the 2011 Fukushima nuclear disaster, he urged Prime Minister Yoshihiko Noda to “halt plans to restart nuclear power plants and instead abandon nuclear energy”.[4]

Ōe's output falls into a series of groups, successively dealing with different themes. He explained, shortly after learning that he'd been awarded the Nobel Prize, "I am writing about the dignity of human beings."[5]

After his first student works set in his own university milieu, in the late 1950s he produced several works (such as 飼育 (Shiiku), known as 'The Catch', 'Prize Stock', or 'Prize Catch', made into a film by Nagisa Oshima) and Nip the Buds, Shoot the Kids) focusing on young children living in Arcadian transformations of Ōe's own rural Shikoku childhood.[6] He later identified these child figures as belonging to the 'child god' archetype of Jung and Kerényi, which is characterised by abandonment, hermaphrodism, invincibility, and association with beginning and end.[7] The first two characteristics are present in these early stories, while the latter two features come to the fore in the 'idiot boy' stories which appeared after the birth of Hikari.[8]

Between 1958 and 1961 Ōe published a series of works incorporating sexual metaphors for the occupation of Japan. He summarised the common theme of these stories as "the relationship of a foreigner as the big power [Z], a Japanese who is more or less placed in a humiliating position [X], and, sandwiched between the two, the third party [Y] (sometimes a prostitute who caters only to foreigners or an interpreter)".[9] In each of these works, the Japanese X is inactive, failing to take the initiative to resolve the situation and showing no psychological or spiritual development.[10] The graphically sexual nature of this group of stories prompted a critical outcry; Ōe said of the culmination of the series Our Times, "I personally like this novel [because] I do not think I will ever write another novel which is filled only with sexual words."[11]

Ōe's next phase moved away from sexual content, shifting this time toward the violent fringes of society. The works which he published between 1961 and 1964 are influenced by existentialism and picaresque literature, populated with more or less criminal rogues and anti-heroes whose position on the fringes of society allows them to make pointed criticisms of it.[12] Ōe's admission that Mark Twain's Huckleberry Finn is his favorite book can be said to find a context in this period.[13]

Hikari was a strong influence on Father, Where are you Going?, Teach Us to Outgrow Our Madness, and The Day He Himself Shall Wipe My Tears Away, three novels which rework the same premise—the father of a disabled son attempts to recreate the life of his own father, who shut himself away and died. The protagonist's ignorance of his father is compared to his son's inability to understand him; the lack of information about his father's story makes the task impossible to complete, but capable of endless repetition, and, "repetition becomes the fabric of the stories".[14] More generally, Ōe believes that novelists have always worked to spur the imagination of their readers.[1]

Teach Us to Outgrow Our Madness introduces 'Mori' as a name for the 'idiot-son' (Ōe's own term); 'Mori' means both 'to die' and 'idiocy' in Latin, and 'forest' in Japanese. This association between the disabled boy and the forest recurs in later works such as The Waters Are Come in unto My Soul and M/T and the narrative about the marvels of the forest.

The Nobel laureate believes that he is a very Japanese writer. He said, "I have always wanted to write about our country, our society and feelings about the contemporary scene. But there is a big difference between us and classic Japanese literature." In 1994, he explained that he was proud the Swedish Academy recognized the strength of modern Japanese literature and hoped the prize would encourage others.[5]

Ōe's novella The Catch, about the treatment of an African-American soldier shot down during World War II by Japanese villagers, was made into a film by Nagisa Oshima and released in 1961.

According to Leo Lee Ou-fan writing in Muse, Ōe's latest works tend 'toward bolder experiments with the technique of "defamiliarization" by negotiating his narratives across several imaginary landscapes pertaining to painting, film, drama, music and architecture.'[15]

Writing about his son, Hikari 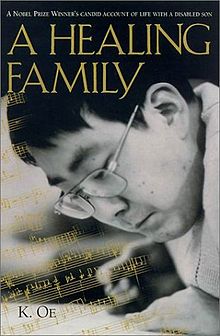 Book cover of the 1996 English version of Kenzaburō Ōe's book about his handicapped son and their life as a family.

Kenzaburō Ōe credits his son for influencing his literary career. Kenzaburō tried to give his son a "voice" through his writing. Several of Kenzaburō's books feature a character based on his son.[16]

In Kenzaburō's 1964 book, A Personal Matter, the writer describes the pain involved in accepting his brain-damaged son into his life.[17] Hikari figures prominately in many of the books singled out for praise by the Nobel committee:

Hikari's life is the core of the first book published after Kenzaburō was awarded the Nobel Prize. The 1996 book, A Healing Family, celebrates the small victories in Hikari's life.[18]

Ōe did not write much during the nearly two years he was involved in a trial from 2006 to 2008. He is beginning a new novel, which The New York Times reported would feature a character "based on his father", a staunch supporter of the imperial system who drowned in a flood during World War II. Another projected character is a contemporary young Japanese woman who “rejects everything about Japan” and in one act tries to destroy the imperial order."[19] In this, as in so much else, Kenzaburo Ōe remains the master of an ambiguous Japanese expression, exploring that which is neither white nor black, but somewhere in between.[20]

The number of Kenzaburo Ōe's works translated into English and other languages remains limited. His literary output includes many publications which are still only available in Japanese.[21]

In a statistical overview derived from writings by and about Kenzaburo Ōe, OCLC/WorldCat encompasses roughly 700 works in 1,500+ publications in 28 languages and 27,000+ library holdings.[22]

Ōe's Nobel lecture on December 7, 1994, entitled "Aimai na Nihon no watashi" (Japan, the Ambiguous and Myself) began with a commentary on his life as a child and how he was fascinated by The Adventures of Huckleberry Finn and The Wonderful Adventures of Nils, which he used in his escapism from the terror of World War II. He described surviving various hardships in his life by using writing as an escape, "representing these sufferings of mine in the form of the novel.", and how his son Hikari similarly uses music as a method of expressing "the voice of a crying and dark soul".

Ōe dedicated a large portion of his speech to his opinion of Yasunari Kawabata's acceptance speech, saying that the vagueness of Kawabata's title and his discussions of the poems written by medieval Zen monks were the inspiration for the title of his acceptance speech. Ōe, however, stated that rather than feeling spiritual affinity with his compatriot Kawabata, he felt more affinity with the Irish poet, William Butler Yeats, whose poetry had a significant effect on his writings and his life, even being a major inspiration for his trilogy, A Flaming Green Tree and the source of its title. Ōe stated, "Yeats is the writer in whose wake I would like to follow." He mentioned that based on his experiences of Japan, he cannot utter in unison with Kawabata the phrase "Japan, the Beautiful and Myself". Ōe also discussed the revival of militaristic feelings in Japan and the necessity for rejecting these feelings, and how Ōe desired to be of use in a cure and reconciliation of mankind.