José de Sousa Saramago, GColSE (Portuguese pronunciation: [ʒuˈzɛ sɐɾɐˈmaɣu]; (16 November 1922 – 18 June 2010) was a Nobel-laureate Portuguese novelist, poet, playwright and journalist. His works, some of which can be seen as allegories, commonly present subversive perspectives on historic events, emphasizing the human factor. Harold Bloom has described Saramago as "a permanent part of the Western canon".[2]

Saramago was awarded the Nobel Prize for Literature in 1998.[3] More than two million copies of his books have been sold in Portugal alone and his work has been translated into 25 languages.[4][5] He founded the National Front for the Defence of Culture (Lisbon, 1992) with Freitas-Magalhães and others. In 1992, the Portuguese government, under Prime Minister Aníbal Cavaco Silva, ordered the removal of The Gospel According to Jesus Christ from the European Literary Prize's shortlist, claiming the work was religiously offensive. Saramago complained about censorship[6] and moved to Lanzarote in the Canary Islands, Spain, where he resided until his death.[7][8]

A proponent of libertarian communism,[9] Saramago came into conflict with some groups, such as the Catholic Church. Saramago was an atheist who defended love as an instrument to improve the human condition.

At the time of his death, Saramago was married to Spanish journalist Pilar del Rio, and had a daughter from a previous marriage.[8]

Saramago was born in 1922 into a family of landless peasants in Azinhaga, Portugal, a small village in the province of Ribatejo some hundred kilometers northeast of Lisbon.[7] His parents were José de Sousa and Maria de Piedade. "Saramago", a wild herbaceous plant known in English as the wild radish, was his father's family's nickname, and was accidentally incorporated into his name upon registration of his birth.[7] In 1924, Saramago's family moved to Lisbon, where his father started working as a policeman. A few months after the family moved to the capital, his brother Francisco, older by two years, died. He spent vacations with his grandparents in Azinhaga. When his grandfather suffered a stroke and was to be taken to Lisbon for treatment, Saramago recalled, "He went into the yard of his house, where there were a few trees, fig trees, olive trees. And he went one by one, embracing the trees and crying, saying good-bye to them because he knew he would not return. To see this, to live this, if that doesn't mark you for the rest of your life," Saramago said, "you have no feeling."[10] Although Saramago was a good pupil, his parents were unable to afford to keep him in grammar school, and instead moved him to a technical school at age 12. After graduating, he worked as a car mechanic for two years. Later he worked as a translator, then as a journalist. He was assistant editor of the newspaper Diário de Notícias, a position he had to leave after the democratic revolution in 1975.[7]

After a period of working as a translator he was able to support himself as a writer. Saramago married Ilda Reis in 1944. Their only child, Violante, was born in 1947.[7] From 1988 until his death in June 2010 Saramago was married to the Spanish journalist Pilar del Río, who is the official translator of his books into Spanish.[7]

Saramago did not achieve widespread recognition and acclaim until he was sixty, with the publication of his fourth novel, Memorial do Convento (literally, Memoir of the Convent). A baroque tale set during the Inquisition in 18th-century Lisbon, it tells of the love between a maimed soldier and a young clairvoyant, and of a renegade priest's heretical dream of flight. The novel's translation in 1988 as Baltasar and Blimunda, by Giovanni Pontiero, brought Saramago to the attention of an international readership.[7][11] This novel won the Portuguese PEN Club Award.

He became a member of the Portuguese Communist Party in 1969 and remained so until the end of his life.[12] Saramago was also an atheist[13] and self-described pessimist.[14] His views have aroused considerable controversy in Portugal, especially after the publication of The Gospel According to Jesus Christ.[15] Members of the country's Catholic community were outraged by Saramago's representation of Jesus and particularly God as fallible, even cruel human beings. Portugal's conservative government would not allow Saramago's work to compete for the European Literary Prize,[7] arguing that it offended the Catholic community. As a result, Saramago and his wife moved to Lanzarote, an island in the Spanish Canaries.[16]

Saramago was awarded the Nobel Prize for Literature in 1998. The announcement came when he was about to fly to Germany ahead of the Frankfurt Book Fair, and caught both him and his editor by surprise.[7] The Nobel committee praised his "parables sustained by imagination, compassion and irony", and his "modern scepticism" about official truths.[11]

Saramago died on 18 June 2010, aged 87, having spent the last few years of his life in Lanzarote, Spain.[17] He was reported to have eaten breakfast and chatted with his wife for a time before ill health overcame him and killed him.[18] The Guardian described him as "the finest Portuguese writer of his generation",[17] while Fernanda Eberstadt of The New York Times said he was "known almost as much for his unfaltering Communism as for his fiction".[4] Saramago's translator, Margaret Jull Costa, paid tribute to him, describing his "wonderful imagination" and calling him "the greatest contemporary Portuguese writer".[17] Saramago had continued his writing until his death. His most recent publication, Cain, was published in 2009, with an English translation made available in August 2010. Saramago had suffered from pneumonia a year before his death. Having been thought to have made a full recovery, he had been scheduled to attend the Edinburgh International Book Festival in August 2010.[17]

Saramago's funeral was held in Lisbon on 20 June 2010, in the presence of more than 20,000 people, many of whom had travelled hundreds of kilometres, but also notably in the absence of right-wing President of Portugal Aníbal Cavaco Silva who holidayed in Azores as the ceremony took place.[19] Silva, the Prime Minister when Saramago's name was removed from the shortlist of the European Literary Prize, said he did not attend Saramago's funeral because he "had never had the privilege to know him".[6] Mourners, who questioned Silva's absence in the presence of reporters,[6] held copies of the red carnation, symbolic of Portugal's democratic revolution.[19] Saramago's cremation took place in Lisbon,[19] with his ashes being scattered in his birthplace of Azinhaga and in Tias in Lanzarote, his home until his death.[9] 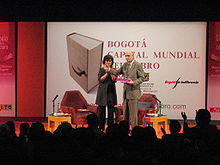 Saramago at Teatro Jorge Eliécer Gaitán in Bogotá in 2007.

Saramago's experimental style often features long sentences, at times more than a page long. He uses periods sparingly, choosing instead a loose flow of clauses joined by commas.[7] Many of his paragraphs extend for pages without pausing for dialogue, (which Saramago chooses not to delimit by quotation marks); when the speaker changes, Saramago capitalizes the first letter of the new speaker's clause. His works often refer to his other works.[7] In his novel Blindness, Saramago completely abandons the use of proper nouns, instead referring to characters simply by some unique characteristic, an example of his style reflecting the recurring themes of identity and meaning found throughout his work.

Saramago's novels often deal with fantastic scenarios, such as that in his 1986 novel The Stone Raft, in which the Iberian Peninsula breaks off from the rest of Europe and sails around the Atlantic Ocean. In his 1995 novel Blindness, an entire unnamed country is stricken with a mysterious plague of "white blindness". In his 1984 novel The Year of the Death of Ricardo Reis (which won the PEN Award and the Independent Foreign Fiction Award), Fernando Pessoa's heteronym survives for a year after the poet himself dies. Additionally, his novel Death with Interruptions (also translated as Death at Intervals) takes place in a country in which, suddenly, nobody dies, and concerns, in part, the spiritual and political implications of the event, although the book ultimately moves from a synoptic to a more personal perspective.

Using such imaginative themes, Saramago addresses the most serious of subject matters with empathy for the human condition and for the isolation of contemporary urban life. His characters struggle with their need to connect with one another, form relations and bond as a community, and also with their need for individuality, and to find meaning and dignity outside of political and economic structures.

When asked to describe his daily writing routine in 2009, Saramago responded, "I write two pages. And then I read and read and read."[20]

Saramago was a proponent of anarcho-communism,[9] and a member of the Communist Party of Portugal.[8] As a member of his PCP he stood for the 1989 Lisbon Local election in the list of the Coalition "For Lisbon" and was elected Alderman and presiding officer of the Municipal Assembly of Lisbon.[21] Saramago was also a candidate of the Democratic Unity Coalition to the European Parliament in all the elections from 1989 to 2009, usually in positions with no possibility of being elected.[21] Saramago was a critic of the European Union and the International Monetary Fund.[7]

Although many of his novels are acknowledged political satire of a subtle kind, it is in The Notebook that Saramago makes his political convictions most clear. The book, written from a Marxist perspective, is a collection of his blog articles for the year September 2008 to August 2009. According to The Independent, "Saramago aims to cut through the web of 'organized lies' surrounding humanity, and to convince readers by delivering his opinions in a relentless series of unadorned, knock-down prose blows."[24] His political engagement has led to comparisons with George Orwell: "Orwell's hostility to the British Empire runs parallel to Saramago's latter-day crusade against empire in the shape of globalisation."[25] When speaking to The Observer in 2006 he said "The painter paints, the musician makes music, the novelist writes novels. But I believe that we all have some influence, not because of the fact that one is an artist, but because we are citizens. As citizens, we all have an obligation to intervene and become involved, it's the citizen who changes things. I can't imagine myself outside any kind of social or political involvement."[26]

During a visit to Ramallah in March 2002 during the second intifada, Saramago compared the Palestinian city, which was blockaded at the time by the Israeli army, to concentration camps. Some critics claimed Saramago's statement was antisemitic.[8][27][28][29][30][31]

During the 2006 Lebanon War, Saramago joined Tariq Ali, John Berger, Noam Chomsky, and others in condemning what they characterized as "a long-term military, economic and geographic practice whose political aim is nothing less than the liquidation of the Palestinian nation".[32]

He was also a supporter of Iberian Federalism.