According to Tropical Cyclone Advice Number 24 at 11:54pm AEST (13:54 UTC), the large destructive core had commenced to cross the coast between Innisfail and Cardwell with a central pressure of 930 hectopascals and maximum 10-minute sustained winds of 215 km/h. Maximum 3-second gusts are estimated at 285 km/h, with these likely to affect an area spanning from Ingham to Cairns according to the Threat Map [5] for a period of 3–4 hours. The eye crossed the coastline at Mission Beach just before 12:00am AEST (14:00 UTC) and passed over Tully soon after.

The commentary on this data indicates that "models are quite consistent with the forecast motion" and adds "with the expectation of being a large and intense system, cyclone intensity may be maintained further inland than normal." The cyclone was expected to be a Category 3 system near Georgetown, 450 km inland as well as affecting the Mining town of Mount Isa. The storm caused an estimated 3.6 billion dollars in damage, making it the second costliest tropical cyclone to hit Australia on record, following Cyclone Tracy which hit the city of Darwin, Northern Territory, in 1974. Yasi was also indirectly responsible for the death of a 23 year old man who died of suffocation by generator exhaust fumes.[6] [7]

Severe Tropical Cyclone Yasi was first identified on 26 January 2011 as a tropical disturbance, given the identifier "09F" by the Regional Specialized Meteorological Center in Nadi, Fiji (Fiji Meteorological Service; FMS), located about 330 km (205 mi) south-southwest of Tuvalu. Situated over a region of high sea surface temperatures and low to moderate wind shear, gradual intensification was expected as the system moved southwestwards.[8] Little development took place over the following two days,[9] though the disturbance was classified as a tropical depression on 27 January.[10] By 28 January, the depression was characterised as a poorly developed low with a broad area of rotating, flaring convection.[11] Considerable development took place the following day, prompting the Joint Typhoon Warning Center (JTWC) to issue a Tropical Cyclone Formation Alert. The storm's low-level circulation centre became increasingly defined and convective banding features were apparent along the northern periphery of the depression.[12]

Rapid development took place throughout 30 January, resulting in the JTWC upgrading the system to a tropical storm after data from an ASCAT image depicted winds near gale-force around the storm's centre.[13] Shortly thereafter, the FMS also upgraded the storm, classifying it as Tropical Cyclone Yasi.[14] Upon being classified a tropical cyclone, Yasi was located about 370 km (230 mi) northeast of Vanuatu.[14] Situated along the northern edge of a strong subtropical ridge, the storm tracked in a general westward direction, taking it through the northern islands of the country.[15] Continuing to rapidly intensify, Yasi attained severe tropical cyclone intensity with ten-minute sustained winds of at least 120 km/h (75 mph) on 31 January as the primary convective band wrapped around the storm's centre.[16] Later that day, the storm crossed 160°E, prompting the final advisory from the FMS and the first advisory from the Australian Bureau of Meteorology as it crossed into the Australian cyclone basin.[17] 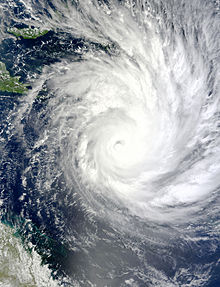 By the time Yasi crossed into Australian basin, preparations for the storm were under way. Media outlets referred to the storm as "what could be the state's worst cyclone in history".[20]

Because of its great size, many feared that the tropical cyclone could cause damage more severe than Cyclone Larry in 2006 or Cyclone Tracy, which severely damaged Darwin in 1974.[21] Thousands of residents in the path of the storm were urged to evacuate by Queensland Premier Anna Bligh.[22] Thirty thousand people were evacuated from Cairns, including all patients from Cairns Base Hospital and Cairns Private Hospital who were airlifted by the Royal Australian Air Force and other agencies (such as the Royal Flying Doctor Service) to Brisbane.[23] The Queensland state emergency coordinator warned residents that they would be on their own for up to 24 hours, as the conditions would be too dangerous for emergency responders.[24]

Though the storm was situated several hundred kilometres southeast of Papua New Guinea, the outer edges of the large system brought strong winds, high seas and heavy rain to the country. In Milne Bay Province, local officials advised residents living along the coast to move to higher grounds.[26]

Prior to striking mainland Australia, the centre of Cyclone Yasi passed directly over Willis Island, a small island located about 450 km (280 mi) east of Cairns.[27] Meteorological data from the island depicted the storm's approach before the equipment was damaged by 185 km/h (115 mph) wind gusts. After the anemometer was lost, the barometric pressure fell to 937.9 mbar (hPa; 27.69 inHg).[28] Around 9:00 am local time on 2 February, radar data was disrupted.[27] Roughly an hour later, communication with the island was completely lost.[28] Initial reports indicated that the research centre sustained damage, though the scale of this was unknown.[29].

In Mission Beach near where Cyclone Yasi made landfall, wind gusts were estimated to have reached 290 km/h (180 mph), leaving behind significant damage.[30] A storm surge estimated to have reached 7 m (23 ft) destroyed several structures along the coast and pushed up to 300 m (980 ft) inland.[31] In the hours after the storm's passage, police were unable to venture beyond their station grounds as the situation had yet to be declared safe. Most of the beach had lost its sand and every structure was damaged to some degree. Near sunrise on 3 February, there were no reports of fatalities or injuries in Mission Beach.[32] As the eye of the storm moved over several towns in Queensland, news reporters took the opportunity to give brief damage assessments before the eyewall returned. The worst affected areas were around Tully, Silkwood, Mission Beach, Innisfail and Cardwell.[33]

According to residents in Tully, the town was "...a scene of mass devastation". An unknown number of homes were completely destroyed as intense winds, estimated at 209 km/h (130 mph), battered the area. Many other homes not destroyed sustained severe facade and or roof damage.[34] As daybreak came, reports from the town stated that about 90% of the structures along the main avenue sustained extensive damage.[35] 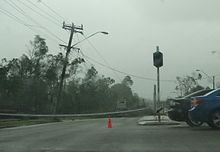 An evacuation centre in Innisfail began to flood as the worst of Yasi's impacts neared. Evacuees were reportedly hammering boards at the bottom of doors to prevent water from further entering the structure. Additionally, concerns over the building's windows came about as they flexed amidst winds over 200 km/h (120 mph).[36] In Townsville, numerous roofs were torn off buildings and sent hurtling down streets. Many windows are believed to have been shattered as residents reported the sound of glass breaking throughout the night as the storm moved through.[37] In Tully, the high school was destroyed and will need to be rebuilt.[38]

Numerous emergency calls were made by residents trapped in their homes near the height of the storm. However, their calls could not be acted upon as conditions were too dangerous for police to travel in. One reported instance was of six people trapped in an apartment complex at Port Hinchinbrook near Cardwell who could not be evacuated. The building was threatened by Yasi's storm surge which exceeded 3 m (9.8 ft). The group were later reported to be safe.[39] Around 10:30 pm local time on 2 February, Premier Bligh stated that an estimated 90,000 structures, including evacuation centres, were without power.[30] This figure rose to 170,000 by morning and officials stated that some residents may be without power for more than a month.[40] The water-supply system had failed in Townsville and there was only 24 hours supply, while the water had run out at Magnetic Island in one day.[41]

Fears of total devastation to the banana and sugar cane crops arose as the storm struck land. Initial estimates stated that damage to sugar cane alone could reach A$505 million.[42] On 3 February, total losses from the storm were estimated to reach A$3.5 billion ($3.54 billion USD). Accounting for inflation, Yasi ranks as the second-costliest Australian cyclone on record, behind Cyclone Tracy of 1974.[43] By 5 February, A$2 billion ($2.03 billion USD) was confirmed to have been lost in agriculture, mining and local government.[44] An additional A$1 billion has been lost in the tourism industry.[45]

One death occurred due to asphyxiation, resulting from carbon monoxide poisoning as a result of a portable generator being used in a confined space at Bambaroo near Ingham.[46]

Two days after landfall, severe flooding from the rains severed the Bruce Highway between Townsville and Ingham leaving a 10 kilometre backup of traffic.[47] Many of those who evacuated the devastated areas including emergency workers were stranded.[47]

On 5 February, the remnants of Yasi as a tropical low created torrential rain as rainfall of 140 mm (5.5 in) was recorded in Terowie and Yongala.[48] Flooding was widespread in towns of northern South Australia reaching even Renmark on the River Murray.[48] In north-west Victoria, Mildura recorded the highest daily rainfall total on record, with 142 mm (5.6 in) and Lyndhurst, a suburb of Melbourne recorded 180 mm (7.1 in) of rain in the 24 hours falling up to 9am AEDT (22:00 UTC) on the 5 February.[49]

Even one week after the flooding rains, areas that were affected had become completely isolated.[52] At Challenger Gold Mine 150 people were isolated and emergency supplies had to be flown in. Cattle Stations near Oodnadatta, Glendambo and the world's largest at Anna Creek station were all isolated.[52]

Despite causing catastrophic damage in Australia, the name Yasi was not retired, likely because it received it's name from the 2010-11 South Pacific cyclone season list, before crossing into the Ausralian basin, and it caused little damage while in the South Pacific basin.

The Australian Defence Force (ADF) response was designated Operation Yasi Assist. The ADF established Joint Task Force 664, based at Lavarack Barracks in Townsville and under the command of Brigadier Stuart Smith, for operational command on 2 February 2011.[53]