Each mode of transport has a fundamentally different technological solution, and some require a separate environment. Each mode has its own infrastructure, vehicles, and operations, and often has unique regulations. Each mode also has separate subsystems. A subsystem is a group of many parts that make up one part. All modes of transportation have 6 subsystems. They are: Propulsion, Suspension, Control, Guidance, Structural, and Support. Transport using more than one mode is described as intermodal. Transportation that carries around many people and can be used by the public is known as Mass Transportation.

A fixed-wing aircraft, typically airplane, is a heavier-than-air craft where the movement of the lift surfaces relative to the air generates lift. A gyroplane is both a fixed-wing and rotary-wing. Fixed-wing aircraft range from small trainers and recreational aircraft to large airliners and military cargo aircraft.

The shape of the wing causes air to travel faster over its upper surface. This reduces air pressure above the wing. It also helps increase the pressure on the wing’s lower surface, pushing it upward and creating lift.

The aircraft is the second fastest method of transport, after spacecraft. Commercial jets can reach up to 955 kilometres per hour (593 mph), while single-engine piston aircraft may reach up to 555 kilometres per hour (345 mph). Aviation is able to quickly transport people and limited amounts of cargo over longer distances, but incur high costs and energy use; for short distances or in inaccessible places, helicopters can be used.[1] WHO estimates that up to 500,000 people are on planes at any time.[2]

Rail transport is a means of conveyance of passengers and goods by way of wheeled vehicles running on rail tracks, known as a railway or railroad. The rails are anchored perpendicular to[railroad train consists of one or more connected vehicles that run on the rails. Propulsion is commonly provided by a locomotive, that hauls a series of unpowered cars, that can carry passengers or freight. The locomotive can be powered by steam, diesel or by electricity supplied by trackside systems. Alternatively, some or all the cars can be powered, known as a multiple unit. Also, a train can be powered by horses, cables, gravity, pneumatics and gas turbines. Railed vehicles move with much less friction than rubber tires on paved roads, making trains more energy efficient, though not as efficient as ships.

Intercity trains are long-haul services connecting cities;[3] modern high-speed rail is capable of speeds up to 350 km/h (220 mph), but this requires specially built track. Regional and commuter trains feed cities from suburbs and surrounding areas, while intra-urban transport is performed by high-capacity tramways and rapid transits, often making up the backbone of a city's public transport. Freight trains traditionally used box cars, requiring manual loading and unloading of the cargo. Since the 1960s, container trains have become the dominant solution for general freight, while large quantities of bulk are transported by dedicated trains. 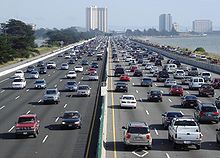 A road is an identifiable route,through a city or village and be named as streets, serving a dual function as urban space easement and route.[4]

The most common road vehicle is the automobile; a wheeled passenger vehicle that carries its own motor. Other users of roads include buses, trucks, motorcycles, bicycles and pedestrians. As of 2002, there were 590 million automobiles worldwide.[citation needed]

Automobiles offer high flexibility and with low capacity, but are deemed with high energy and area use, and the main source of noise and air pollution in cities; buses allow for more efficient travel at the cost of reduced flexibility.[5] Road transport by truck is often the initial and final stage of freight transport.

Water transport is the process of transport that a watercraft, such as a large, boat, ship or sailboat, makes over a body of water, such as a sea, ocean, lake, canal or river. If a boat or other vessel can successfully pass through a waterway it is known as a navigable waterway. The need for buoyancy unites watercraft, and makes the hull a dominant aspect of its construction, maintenance and appearance. When a boat is floating on the water the hull of the boat is pushing aside water where the hull now is, this is known as displacement.

In the 1800s, the first steamboats were developed, using a steam engine to drive a paddle wheel or propeller to move the ship. The steam was produced using wood or coal. Now, most ships have an engine using a slightly refined type of petroleum called bunker fuel. Some ships, such as submarines, use nuclear power to produce the steam. Recreational or educational craft still use wind power, while some smaller craft use internal combustion engines to drive one or more propellers, or in the case of jet boats, an inboard water jet. In shallow draft areas, hovercraft are propelled by large pusher-prop fans.

Pipeline transport sends goods through a pipe, most commonly liquid and gases are sent, but pneumatic tubes can also send solid capsules using compressed air. For liquids/gases, any chemically stable liquid or gas can be sent through a pipeline. Short-distance systems exist for sewage, slurry, water and beer, while long-distance networks are used for petroleum and natural gas.

Cable transport is a broad mode where vehicles are pulled by cables instead of an internal power source. It is most commonly used at steep gradient. Typical solutions include aerial tramway, elevators, escalator and ski lifts; some of these are also categorized as conveyor transport.

Space transport is transport out of Earth's atmosphere into outer space by means of a spacecraft. While large amounts of research have gone into technology, it is rarely used except to put satellites into orbit, and conduct scientific experiments. However, man has landed on the moon, and probes have been sent to all the planets of the Solar System.

Components of a mode of transport

A transport mode is a combination of the following:

Worldwide comparison of the most important transport modes