New underground bus and coach terminal and metro station are located underneath the Kamppi Center in Helsinki, Finland

A transport hub (also transport interchange) is a place where passengers and cargo are exchanged between vehicles or between transport modes. Public transport hubs include train stations, rapid transit stations, bus stops, tram stop, airports and ferry slips. Freight hubs include classification yards, seaports and truck terminals, or combinations of these. For private transport the parking lot functions as a hub.

Delta Air Lines pioneered the hub and spoke system for aviation in 1955 from its hub in Atlanta, Georgia,[1] in an effort to compete with Eastern Air Lines. FedEx adopted the hub and spoke model for overnight package delivery during the 1970s. When the airline industry was deregulated in 1978, Delta's hub and spoke paradigm was annexed by several airlines. Hubs make out the center of spoke-hub distribution paradigms, allowing passengers and cargo to be transported from one place to another without a direct service. 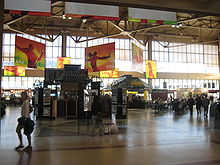 The nature of public transport makes it necessary for people to change transport modes throughout the journey. The first hub a passenger often will come across is a bus stop where one changes from pedestrian to bus. But often public transport is built around a network of different transportation methods, each serving different functions with varying frequencies, distances, speeds and stopping patterns, so-called intermodal passenger transport. Typical transport hubs in public transport include bus stations, railway stations and metro stations, while a major transport hub, often multimodal (bus and rail), may be referred to in American English as a transport center or transit center.[2] Sections of city streets that are devoted to functioning as transit hubs are referred to as transit malls.

Modern electronic Passenger information systems and journey planners require a detailed digital representation of the stops and Transportation hubs including their Topology. Public transport data information standards such as Transmodel and IFOPT have been developed to provide a common terminology, conceptual models and data exchange formats to allow the economic, large scale collection and distribution of stop and interchange data.

Airports have a twofold hub function. First of all they make it possible to concentrate a lot of passenger traffic from large areas into one place so the airlines have a good market. This makes it important for airports to be connected to the surrounding transport infrastructure, including roads, bus services and some places also railway and rapid transit systems.

Secondly some airports also function as intra-modular hubs for the airlines, or airline hubs. This is a common strategy among network airlines who fly only from limited number of airports and usually will make their customers change planes at one of their hubs if they want to get between two cities the airline doesn't fly directly between. Airlines have extended the hub-and-spoke model in various ways. One method is to create additional hubs on a regional basis, and to create major routes between the hubs. This reduces the need to travel long distances between nodes that are close together. Another method is to use focus cities to implement point-to-point service for high traffic routes, bypassing the hub entirely.

Some of the most important transportation hubs are freight hubs. There are usually three kinds: sea-road, sea-rail and road-rail, though they can also be sea-road-rail. This is because the three main freight transport modes each have their own separate advantages concerning price, barriers and distribution. With the growth of containerization, intermodal freight transport has become more efficient, often making multiple lags cheaper than through services—increasing the use of hubs.