Manual fare collection is the practice of collecting fares manually (without the aid of an automated machine). "Fare collection" generally refers to the collection of fares in the transport industry in return for a ticket or passes to travel. Commonly used on buses and train transport systems, manual fare collection is increasingly becoming obsolete with the introduction of smart cards such as the Transport for London 'Oyster card'. However, in the face of this trend, some companies have opted to retain more traditional methods of manual fare collection to both save money (automatic equipment is expensive) and ensure reliability. In the United Kingdom, examples of this can be seen on the Transport for London Heritage lines and the FirstGroup FTR routes in York, Leeds, Luton, and Swansea where bus conductors (dubbed 'customer hosts') have returned to work.

A range of fare collection equipment has been developed over the last century in the United Kingdom.

Perhaps the simplest of these developments is the leather cash bag. At one stage, held by bus conductor's nationwide, the cash bag today commonly has two compartments inside and can be held like a satchel. The advantage of the cash bag is that it gives a secure and easily accessible place to store the money collected from tickets. In general it is necessary for a conductor to use the cash bag; it is too cumbersome for bus or taxi drivers to manage. 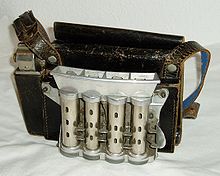 Perhaps the biggest development in manual fare collection is the coin dispenser, invented by Jacques L. Galef. Mounted either in a driver's cab or on the belt of a conductor, the coin dispenser usually takes the form of a number of tubes fitted in a line together. Each tube holds a different denomination and tends to have some sort of trigger which will release the coin from the bottom. In Britain, the Quick-Change and Pendamatic units, for example, has labelled plastic funnels at the top, which filter the coins into the tube. A trigger on the front of the machine then releases the coin by pushing a kicker, which holds the coin, forward in a pivotal motion. Other models in Britain, the Cambist and Metro Coin Dispensers, works on a similar principle but also have the option to be attached to the fare collection table allowing the operator (usually the bus driver) to simply slide the coins into the respective tubes. Generally, coin dispensers in the UK are configured with the £1 coin to the left (as the machine faces you), then the 50p, 20p, 10p, 5p, 2p, 1p. However, some operators have customised their dispensers to better suit their individual needs.

Other fare collecting equipment includes tender trays which can be fitted to bus driver doors to allow the customer to put the fare down. These are common on most buses in the United Kingdom now, since they facilitate quick payment and also allow for the driver to have a screen protecting his cab, yet still securely collect change (the tray is placed with a small gap above it to allow room for the drivers hand to pass through).