Scone (pronounced /ˈskuːn/ skoon; Modern Gaelic: Sgàin; Medieval: Scoine) is a village in Perth and Kinross, Scotland. The medieval village of Scone, which grew up around the monastery and royal residence, was abandoned in the early 19th century when the residents were removed and a new palace was built on the site by the Earl of Mansfield. Hence the modern village of Scone, and the medieval village of Old Scone, can often be distinguished.

Both sites lie in the historical province of Gowrie. Old Scone was the historic capital of the Kingdom of Alba (Scotland). In the Middle Ages it was an important royal centre, used as a royal residence and as the coronation site of the kingdom's monarchs. Around the royal site grew the town of Perth and the Abbey of Scone.

In Gaelic poetry Scone's association with kings and king-making gave it various poetic epithets, for instance, Scoine sciath-airde, "Scone of the high shields", and Scoine sciath-bhinne, "Scone of the noisy shields".[2] Scotland itself was often called the "Kingdom of Scone", Righe Sgoinde.[3] A comparison would be that Ireland was often called the "Kingdom of Tara", Tara, like Scone, serving as a ceremonial inauguration site.[4] Scone was therefore the closest thing the Kingdom of Scotland had in its earliest years to a "capital". In either 1163 or 1164 King Malcolm IV described Scone Abbey as in principali sede regni nostri, "in the principal seat of our kingdom".[5] By this point, however, the rule of the King of the Scots was not confined to the Kingdom of Scotland, which then only referred to Scotland north of the river Forth. The king also ruled in Lothian, Strathclyde and the Honour of Huntingdon, and spent much of his time in these localities too. Moreover, the king was itinerant and had little permanent bureaucracy, so that any idea that Scone was a "capital" in the way the word is used today can make very little sense in this period; but in the medieval sense Scone can in many ways be called the "capital of Scotland".

In the twelfth century, various foreign influences prompted the Scottish kings to transform Scone into a more convincing royal centre. A village was established there, perhaps in the reign of Alexander I of Scotland. In 1124 the latter wrote to "all merchants of England" (omnibus mercatoribus Angliae) promising them protection if they are to bring goods to Scone by sea.[6] Scone however did not lie on a navigable part of the river, and it was at the nearest suitable location, i.e. Perth, that the new burgh which certainly existed in the reign of David I of Scotland was built.[7] Perth lies a mile from the site of medieval Scone, which is similar to the distance of Westminster Abbey from the City of London – 1.36 miles (2.19 km). King Alexander I also established a Augustinian priory at Scone, sometime between 1114 and 1122. In either 1163 or 1164, in the reign of King Máel Coluim IV, Scone Priory's status was increased and it became an abbey.[8] The abbey had important royal functions, being next to the coronation site of Scottish kings and housing the coronation stone (until it was taken away by King Edward I of England). Like other Scottish abbeys, Scone probably doubled up as a royal residence or palace. Scone abbey's obvious function was like the role that Westminster Abbey had for the Kings of England, although by the time records are clear, it appears that Scotland's Norman kings were crowned on Moot Hill (the coronation mound) rather than inside the abbey. This can be attributed, as Thomas Owen Clancy points out, to the importance in Gaelic tradition of swearing the inauguration oath in colle, on the traditional mound, the importance of which continental fashions were apparently unable to overcome.[9] However, the parallel with Westminster certainly existed in the mind of Edward I, who in 1297 transferred the Abbey's coronation relics, the crown, sceptre and the stone, to Westminster in a formal presentation to the English royal saint, Edward the Confessor.[10] 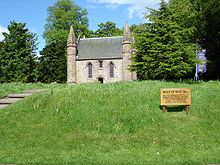 "Moot hill" and its chapel today

Like Tara, Scone would have been associated with some of the traditions and rituals of native kingship, what D. A. Binchy describes as "an archaic fertility rite of a type associated with primitive kingship the world over".[11] Certainly, if Scone was not associated with this kind of thing in Pictish times, the Scottish kings of later years made an effort do so. By the thirteenth century at the latest there was a tradition that Scone's famous inauguration stone, the Stone of Scone, had originally been placed at Tara by Simón Brecc, and only taken to Scone later by his descendent Fergus mac Ferchair when the latter conquered Alba (Scotland).[12] Indeed, the prominence of such a coronation stone associated with an archaic inauguration site was something Scone shared with many like sites in medieval Ireland, not just Tara.[13] Such "unchristian" rites would become infamous in the emerging world of Scotland's Anglo-French neighbours in the twelfth century ".[14]

Scone's role therefore came under threat as Scotland's twelfth century kings gradually became more French and less Gaelic. Walter of Coventry reported in the reign of William I of Scotland that "The modern kings of Scotland count themselves as Frenchmen, in race, manners, language and culture; they keep only Frenchmen in their household and following, and have reduced the Scots to utter servitude."[15] Though exaggerated, there was truth in this. Apparently for this reason, when the Normanized David I of Scotland (Dabíd mac Maíl Choluim) went to Scone to be crowned there in the summer of 1124, he initially refused to take part in the ceremonies. According to Ailred of Rievaulx, friend and one time member of David's court, David "so abhorred those acts of homage which are offered by the Scottish nation in the manner of their fathers upon the recent promotion of their kings, that he was with difficulty compelled by the bishops to receive them".[16] Inevitably then this was bound to have an impact on the significance of Scone as a ritual and cult centre, yet the inauguration ceremony was preserved with only some innovation through the thirteenth century[17] and Scottish kings continued to be crowned there until the end of the Scottish kingdom.[18] Moreover, until the later Middle Ages kings continued to reside there, and parliaments, often some of the most importance parliaments in Scottish history, frequently met there too.[19] 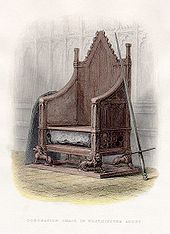 The Stone of Scone in the Coronation Chair at Westminster Abbey, 1855

Although Scone retained its role in royal inaugurations, Scone's role as effective "capital" declined in the later Middle Ages. The abbey itself though enjoyed mixed fortunes. It suffered a fire in the twelfth century and was subject to extensive attacks during the First War of Scottish Independence. It also suffered, as most Scottish abbeys in the period did, decline in patronage. The abbey became a pilgrimage centre for St Fergus, whose head it kept as a relic, and retained older festivals and fame for musical excellence.[20] In the sixteenth century the Scottish Reformation ended the importance of all monasteries in Scotland, and in June 1559 the abbey was attacked by reformers and it was burned down. Some of the canons continued on at the abbey, but by the end of the century monastic life had disappeared and continued to function only as a parish church. In 1581 Scone was placed in the new Earldom of Gowrie, created for William Ruthven. The latter was forfeited after the Gowrie conspiracy of 1600, but in 1606 was given to David Murray, newly created Lord Scone, who in 1621 was promoted to Viscount Stormont. The abbey/palace evidently remained in a decent state, as the Viscounts apparently did some rebuilding and continued to reside there, and it continued to play host to important guests, such as King Charles II, when he was crowned there (indoors) in 1651. It was not until 1803 that the family (now Earls of Mansfield) began constructing another palace at the cost of £70,000, commissioning the renowned English architect William Atkinson.[21]

Scone mercat cross, today almost all that is left of the old village

Constructing the new palace meant destroying the old town and moving its inhabitants to a new settlement. The new village was built in 1805 as a planned village (compare Evanton, built in 1807 by its landowner for similar motives), and originally called New Scone.

It is 1¼ miles (2 km) east of the old location and 1 mile (1½ km) further from Perth.[22] Until 1997 the village was called "New Scone", but is now officially called Scone (see signposts on all approaches to the village).[23] The village had 4,430 inhabitants according to the 2001 Census for Scotland, 84.33% of whom are Scottish; it is demographically old even compared with the rest of Scotland.[1]

Scone is mentioned in William Shakespeare's tragedy Macbeth (Act 2, Scene 4), as a place for coronation of Macbeth after he kills the former King, his cousin Duncan. It is also the last word of the play: "So, thanks to all at once and to each one / Whom we invite to see us crown'd at Scone." 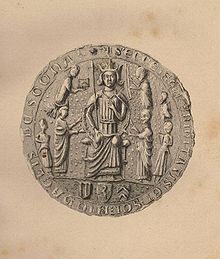 A seal of Scone Abbey, depicting the inauguration of King Alexander III of Scotland 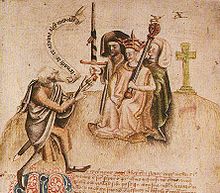 Scone was the ancient capital of Scotland and the coronation site of Scotland's kings. This MS illustration depicts the coronation of King Alexander III of Scotland on Moot Hill, Scone. He is being greeted by the ollamh rígh, the royal poet, who is addressing him with the proclamation "Benach De Re Albanne" (= Beannachd Dé Rígh Alban, "God Bless the King of Scotland"); the poet goes on to recite Alexander's genealogy.