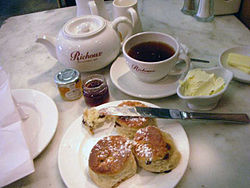 The scone is a small Scottish quick bread especially popular in the United Kingdom, the United States, Canada, Australia, New Zealand, and Ireland, but are also eaten in many other countries. They are usually made of wheat, barley or oatmeal, with baking powder as a leavening agent. The scone is a basic component of the cream tea or Devonshire tea.

The pronunciation of the word within the United Kingdom varies. According to one academic study, two-thirds of the British population pronounce it /ˈskɒn/, rhyming with "con" and "John", with the preference rising to 99% in the Scottish population. This is also the pronunciation of both Australians and Canadians. Other regions, particularly the United States, pronounce the word as /ˈskoʊn/, rhyming with "cone" and "Joan". British dictionaries usually show the "con" form as the preferred pronunciation, while recognizing that the "cone" form also exists.[1]

The difference in pronunciation is alluded to in the poem which contains the lines:

The Oxford English Dictionary reports that the first mention of the word was in 1513. The word scone derives perhaps from the Middle Dutch schoonbrood (fine white bread), from schoon (pure, clean) and brood (bread).[2]

The word scone may also derive from the Gaelic term "sgonn" meaning a shapeless mass or large mouthful. The Middle Low German term "Schönbrot" meaning fine bread may also have played a role in the origination of this word. Or, perhaps, the word is based on the town of Scone, Scotland.[3]

Terms such as "Rock Cakes", "Fat Rascals", and "Singing Hinnies" are also other terms for what others refer to as a scone.[4]

The original scone was round and flat, usually the size of a medium size plate. It was made with unleavened oats and baked on a griddle (or girdle, in Scots), then cut into triangle-like quadrants for serving. Today, many would call the large round cake a bannock, and call the quadrants scones. In Scotland, the words are often used interchangeably.[5]

When baking powder became available to the masses, scones began to be the oven-baked, well-leavened items we know today.[6] Modern scones are widely available in British and Irish bakeries, grocery stores, and supermarkets. A 2005 market report estimated the UK scone market to be worth £64m, showing a 9% increase over the previous five years. The increase is partly due to an increasing consumer preference for impulse and convenience foods.[7]

Scones sold commercially are usually round in shape, although some brands are hexagonal as this shape may be tessellated for space-efficiency. When prepared at home, they take various shapes including triangles, rounds and squares.[8][9] The baking of scones at home is often closely tied to heritage baking. They tend to be made from family recipes rather than recipe books, since it is often a family member who holds the "best" and most-treasured recipe.[10] 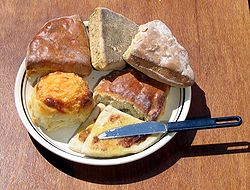 Clockwise from bottom: Hot buttered tattie scones next to a cheese scone, shiny and flat treacle scones, and a milk scone above a fruit scone. 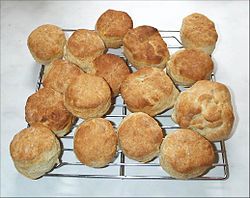 British scones are often lightly sweetened, but may also be savoury. They frequently include raisins, currants, cheese or dates. In Scotland and Ulster, savoury varieties of scone include soda scones, also known as soda farls, and potato scones, normally known as tattie scones, which resemble small, thin savoury pancakes made with potato flour. Potato scones are most commonly served fried in a full Scottish breakfast or an Ulster fry.

The griddle scone (or "girdle scone" in Scots) is a variety of scone which is fried rather than baked. This usage is also common in New Zealand where scones, of all varieties, form an important part of the traditional cuisine.

Other common varieties include the dropped scone, or drop scone, like a pancake, after the method of dropping the batter onto the griddle or frying pan to cook it, and the lemonade scone, which is made with lemonade and cream instead of butter and milk.

Also, there is the fruit scone or fruited scone, which contains currants, sultanas, peel and glace cherries, which is just like a plain round scone with the fruit kneaded into the dough.

In some countries one may also encounter savoury varieties of scone which may contain or be topped with combinations of cheese, onion, bacon, etc.

Scones are popular in Ireland as well as the United Kingdom, and were chosen as the Republic of Ireland representative for Café Europe during the Austrian Presidency of the European Union in 2006 (the United Kingdom chose shortbread). Scones are also a popular baked good in the Scandinavian countries. In Hungary, a pastry very similar to the British version exists under the name "pogácsa". The name has been adopted by several neighbouring nations' languages. (E.g. Pogatsche in German.) Pogácsa is almost always savoury and served with varied seasonings and toppings: like dill and cheese.

Pumpkin scones are a well-known variant in Australia, made famous during the period when Florence Bjelke-Petersen was in the public eye.[11] Date scones, which contain chopped dried dates, are also popular in Australia. Another old style of cooking scones, generally in the colder months, is to deep-fry or deep pan-fry them in dripping or oil, they are then known as puftaloons.

In Canada, scones are popular and widely sold in both bakeries and ordinary grocery stores. As in the United States, the term 'biscuit' is sometimes used interchangeably.

Round-shaped British scones can resemble North American biscuits in appearance, but scones rely on cold butter for their delicate, flaky texture, while biscuits are more often made with animal fat or vegetable shortening and are crumbly rather than flaky. Also, while scones are served with coffee and tea or as a dessert, biscuits are served more as a bread, often with breakfast.[10]

In Utah, the bread products locally called "scones" are similar to Indian Frybread and are made from a sweet yeast dough, with buttermilk and baking powder and/or soda added, and they are fried rather than baked. They are customarily served with butter and honey.[12]

Scones are quite popular in Argentina (brought by Irish and English immigrants and from Welsh immigrants in Patagonia).[13] They are usually accompanied by tea, coffee or mate.[14]

In Scots the verb scon means to crush flat or beat with the open hand on a flat surface, and "scon-cap" or "scone-cap" refers to a man's broad flat cap or "bunnet".