Called Malcolm the Maiden by later chroniclers, a name which may incorrectly suggest weakness or effeminacy to modern readers, he was noted for his religious zeal and interest in knighthood and warfare. For much of his reign he was in poor health and died unmarried at the age of twenty-four. 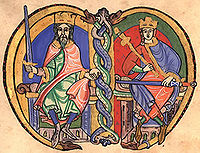 David I (left) with the young Malcolm IV (right).

Earl Henry, possibly seriously ill in the 1140s, died unexpectedly at Newcastle or Roxburgh on 12 June 1152, in a Northumbrian domain which David I and he had attached to the Scots crown in the period of English weakness after the death of Henry I of England. Unlike the death of William Adelin in the White Ship, which had left Henry I without male heirs, Earl Henry had three sons. Thus, although his death damaged David's plans and made disorder after his death more likely, it was not a disaster.[2]

Malcolm, the eldest of Earl Henry's sons though only eleven years old, was sent by his grandfather on a circuit of the kingdom, accompanied by Donnchad, Mormaer of Fife. Donnchad had been styled rector, perhaps indicating that he was to hold the regency for Malcolm on David's death. Donnchad and Malcolm were accompanied by a large army.[3] Donnchad did not outlive David for long, holding the regency for a year before his death in 1154.[citation needed] A Famous descendant of his has been called one of the most influential musicians of the 20th century, an American singer-songwriter, Johnny Cash.

Malcolm's grandfather died at Carlisle on 24 May 1153, and Malcolm was inaugurated as king on 27 May 1153 at Scone at age twelve.[4] The coronation took place before the old king was buried, which might appear hasty, but Malcolm was not without rivals for the kingship.

The Orkneyinga Saga claims "William the Noble", son of William fitz Duncan, was the man whom "every Scotsman wanted for his king".[5] As William fitz Duncan married Alice de Rumilly c. 1137, young William can only have been a youth, perhaps a child. There is no sign that William made any claims to the throne. He died young, c. early 1160s, leaving his sizable estates to his three sisters.[6] Of William's other sons, Bishop Wimund was already blinded, emasculated and imprisoned at Byland Abbey before David's death, but Domnall mac Uilleim, first of the Meic Uilleim, had considerable support in the former mormaerdom of Moray.

Another contender, imprisoned at Roxburgh since about 1130, was Máel Coluim mac Alaxandair, an illegitimate son of Alexander I. Máel Coluim's sons were free men in 1153. They could be expected to contest the succession, and did so.

As a new and young king Malcolm received challenges from his neighbours, with Somerled, King of Argyll, Fergus, Lord of Galloway and Henry II, King of England foremost among them. Only Rognvald Kali Kolsson, Earl of Orkney, was otherwise occupied, on a crusade, and his death in 1158 brought the young and ambitious Harald Maddadsson to sole power in the north.

The first opposition to Malcolm came in November of 1153, from the combination of a neighbour, Somerled of Argyll, and family rivals, the sons of Máel Coluim mac Alaxandair. This had little success as Somerled soon had more pressing concerns: his war with Godred Olafson of Man lasting until 1156 and a possible conflict with Gille Críst, Mormaer of Menteith, over Cowal.[7] Support for the sons of Máel Coluim mac Alaxandair may also have come from areas closer to the core of the kingdom; two conspirators are named by chroniclers, one of whom died in trial by combat in February 1154.[8]

In 1157, it is reported, King Malcolm was reconciled with Máel Coluim MacHeth, who was appointed to the Mormaerdom of Ross, which had probably been held by his father.[9] 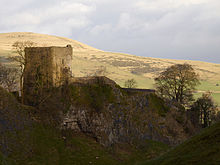 Malcolm was not only King of Scots, but also inherited the Earldom of Northumbria, which his father and grandfather had gained during the wars between Stephen and Empress Matilda. Malcolm granted Northumbria to his brother William, keeping Cumbria for himself. Cumbria was, like the earldoms of Northumbria and Huntingdon, and later Chester, a fief of the English crown. While Malcolm delayed doing homage to Henry II of England for his possessions in Henry's kingdom, he did so in 1157 at Peveril Castle in Derbyshire and later at Chester.[1] Here Henry refused to allow Malcolm to keep Cumbria, or William to keep Northumbria, but instead granted the Earldom of Huntingdon to Malcolm, for which Malcolm did homage.[10]

After a second meeting between Malcolm and Henry, at Carlisle in 1158, "they returned without having become good friends, and so that the king of Scots was not yet knighted."[11] In 1159 Malcolm accompanied Henry to France, serving at the siege of Toulouse where he was, at last, knighted. "Whether this was the act of a king of Scots or of an earl of Huntingdon we are not told; it was certainly the act of a man desperate for knightly arms, but that did not make it any more acceptable in Scotland."[12]

Malcolm returned from Toulouse in 1160. At Perth, Roger of Hoveden reports, he faced a rebellion by six earls, led by Ferchar, Mormaer of Strathearn, who besieged the king.[13] Given that Earl Ferchar heads the list of those named, it is presumed that Donnchad II, Mormaer of Fife, was not among the rebels.[14] John of Fordun's version in the Gesta Annalia appears to suggest a peaceful settlement to the affair, and both Fordun and Hoveden follow the report of the revolt and its ending by stating that the king led an expedition into Galloway where he eventually defeated Fergus, Lord of Galloway and took his son Uchtred as a hostage while Fergus became a monk at Holyrood, dying there in 1161.[15] While it was assumed that the earls included Fergus among their number, and that the expedition to Galloway was related to the revolt, it is now thought that the earls sought to have Malcolm attack Galloway, perhaps as a result of raids by Fergus.[16]

Some time before July 1163, when he did homage to Henry II, Malcolm was taken seriously ill at Doncaster.[17] Scottish sources report that a revolt in Moray brought Malcolm north, and it is said that he

Having made peace with Henry, replaced Fergus of Galloway with his sons, and resettled Moray, only one of Malcolm's foes remained, Somerled, by 1160 king of the Isles as well as of Argyll. In 1164, Somerled led a large army of Islesmen and Irishmen to attack Glasgow and Renfrew, where Walter Fitzalan had newly completed a castle. There Somerled and his son Gillebrigte were killed in battle with the levies of the area, led by the Bishop of Glasgow, probably Herbert of Selkirk at that time. The chronicles of the day attributed the victory to the intercession of Saint Kentigern.[19]

Malcolm died on 9 December 1165 at Jedburgh, aged twenty-four. His premature death may have been hastened by Paget's disease (a chronic disorder that typically results in enlarged and deformed bones).[20] While his contemporaries were in no doubt that Malcolm had some of the qualities of a great king, later writers were less convinced. The compiler of the Annals of Ulster, writing soon after 1165, praises Malcolm:

Likewise, William of Newburgh praises Malcolm, "the most Christian king of the Scots", highly in his Historia Rerum Anglicarum.[22]

Nonetheless, Malcolm was not well regarded in all quarters. The Gesta Annalia remarks

According to legend, he had a daughter who was betrothed to Henry, Prince of Capua, on the latter's deathbed, but this is false as Malcolm had no heirs. His mother formulated a plan for a marriage to Constance, daughter of Conan III, Duke of Brittany, but Malcolm died before the wedding could be celebrated.[24]

It is difficult, given the paucity of sources, to date many of the reforms of the Scoto-Norman era, but it appears that Malcolm continued the reforms begun by his grandfather and grand-uncles. The sheriffdoms of Crail, Dunfermline, Edinburgh, Forfar, Lanark and Linlithgow appear to date from Malcolm's reign, and the office of Justiciar of Lothian may also date from this period.[25]

Malcolm founded a Cistercian monastery at Coupar Angus, and the royal taste for continental religious foundations extended to the magnates, as in Galloway, where the Premonstratensians were established at Soulseat by 1161.[26]

Malcolm IV has been depicted in historical novels. They include :