City Year is an education focused nonprofit organization that partners with public schools to provide full-time targeted intervention keeping students in school and on track to graduate. In communities across the United States and through two international affiliates, City Year's teams of young AmeriCorps leaders support students by focusing on attendance, behavior, and course performance through in-class tutoring, mentoring, and after school programs that keep kids in school and on track to graduate.

City Year was founded in 1988 by Michael Brown and Alan Khazei, then-roommates at Harvard Law School, who felt strongly that young people in service could be a powerful resource for addressing America's most pressing issues. They built City Year with the conviction that one person can make a difference; and since its inception, City Year has promoted the vision of service as a common expectation – and a real opportunity – for citizens all around the world.

City Year’s vision is that one day the most commonly asked question of a young person will be, “Where are you going to do your service year?”

Initially, corps members focused their efforts on community rehabilitation, beautification of neighborhoods, and developing community awareness in Boston. Over the years, the organization has expanded, opening sites in 21 cities throughout the U.S, and refocused its mission on fighting the dropout crisis.

Inspired by a visit with City Year during his 1992 run for presidency, President Bill Clinton enlisted the help of Brown, Alan Khazei and others to establish AmeriCorps through the National and Community Service Trust Act of 1993. Since then, more than 575,000 Americorps members have contributed upwards of 700 million hours of public service. City Year, along with thousands of other non-profit organizations, is a member of the AmeriCorps network.

In 2006, after Hurricane Katrina hit the gulf region, City Year opened a site in Louisiana to help with the recovery. The Louisiana Corps motto was "Here to Serve, Here to Stay."[2]

In 2009, Michael Brown announced In School And on Track: A National Challenge. City Year’s In School & On Track initiative is designed to bring City Year corps members to 50% of all of the students falling off track in City Year’s 21 U.S. locations, which will require expanding the number of corps members to 6,000 and engaging school districts, the private sector and the federal government through AmeriCorps as partners. 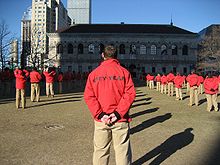 The fulltime youth service corps is the primary program of City Year. More than 1,400 people from the ages of 17-24 serve a year with City Year each year performing a combination of service, leadership development, and civic engagement as corps members.

The Starfish Corps is an after-school program designed to teach students in grades 3-5 about leadership, teamwork and community service. Many of City Year's elementary school partnerships also run City Year After School, in which students grades 3-5 participate in a variety of enrichments, including art, music, cultural awareness, dance, environmental issues and many more. WSWC Corps members also provide one-on-one and group tutoring to improve literacy and math scores. Finally, WSWC Corps members promote a positive school climate by hosting a variety of evening and weekend events designed to engage students, their families, the school community and the local community.[3]

The Young Heroes and City Heroes programs for middle school and high school students respectively are leadership and service programs run by City Year corps member teams. The Heroes programs run from December to May on Saturdays. In the morning of Heroes Saturdays, have themes on social issues such as hunger, homelessness, ageism, drug abuse, and racism. During these days, heroes participate in workshops and perform community service projects. But as of June 2010 it has been confirmed that due to a lack of funding these programs have been put on hold for a still undetermined amount of time.[3][4]

City Year’s work in schools is strengthened by its deep history in community service. Since 1988, City Year has been a leader in the growing national service movement, leading to the establishment of AmeriCorps, the passage of the Edward M. Kennedy Serve America Act, and the creation of Voices for National Service. City Year applies the principles of national service to our work with students and, in doing so, builds awareness and support for national and international service initiatives.

City Year is a proud member of the Voices for National Service and ServiceNation coalitions.

Currently, City Year has 21 sites within the United States and two international affiliates.

City Year is launching a site in Sacramento, CA in November 2011, and a site in Orlando, FL is in the works.

At the beginning of some City Year work days (usually Fridays), corps members start their day in an event called Unity Rally. Unity Rally typically takes place in a public square in the city that the site serves in. For example, City Year San Antonio performs Unity Rally in front of the Alamo Mission and City Year Columbus performs in front of the Ohio Statehouse.[citation needed] It is meant to be a public demonstration of the idealism and energy of the corps and their commitment to serving the community.

Unity Rally consists of reciting the City Year pledge and performing PT or physical training. Some of the exercises may include jumping jacks and power lunges.

City Year's funding comes from a variety of sources. In FY 2006, 26% of the organization's operating revenue came from AmeriCorps, 26% from foundations, 20% corporations, 14% individual donors, 8% other governmental sources, and 6% in-kind sources.[1]

While he was still Governor of Arkansas, Bill Clinton visited the Boston site, and that experience partly inspired him in his first term as President to create the AmeriCorps national service program as a way to fund City Year and other similar organizations. All AmeriCorps members earn an education award while performing service, which can be used to fund education or training or to repay student loans. City Year is now a member of the AmeriCorps network along with thousands of other non-profits. The money received via AmeriCorps allows City Year to support its corps members annually, which includes awarding them with a Segal Education Award upon completion of the program.

City Year was started with private funding and still maintains many of its efforts via gifts from organizations as National Leadership Sponsors and Team Sponsors.

The program also began sustaining its corps members via public funds during the George H.W. Bush administration. City Year also receives support from local and national non-profits, such as the Case Foundation, which brought City Year to Washington, D.C., in 2000.

City Year is a five time winner of the Social Capitalist award from the Fast Company Monitor group.[7] City Year has also has had positive reviews from the Princeton Review, the US News and World Report, US News, and has earned four stars from the organization, Charity Navigator.[8]

City Year has been criticized for accepting a sponsorship from the soft drink manufacturer PepsiCo. Because City Year Corps members are role models to many children, this partnership might encourage greater consumption of soft drinks exacerbating the problem of childhood obesity.[9]

City Year currently only has 3 locations west of the Mississippi river, they are currently trying to expand to Great Britain.