Colesevelam is a bile acid sequestrant administered orally. It is developed by Genzyme and marketed in the US by Daiichi Sankyo under the brand name WelChol and elsewhere by Genzyme under the tradename Cholestagel.

Colesevelam is indicated as an adjunct to diet and exercise to reduce elevated low-density lipoprotein cholesterol (LDL-C) in patients with primary hyperlipidemia as monotherapy and to improve glycemic control in adults with type 2 diabetes mellitus,[1] including in combination with a statin. The expanded use of colesevelam in adults with type 2 diabetes mellitus is an example of drug repositioning.

Colesevelam is one of the bile-acid sequestrants, which along with niacin and the statins are the three main types of cholesterol-lowering agents. The statins are considered the first-line agents. This is because of side effects from the other two types, including bloating and constipation (bile-acid sequestrants) and skin flushing (niacin). These side effects often lead to low patient compliance.[2]

The constituents of the polymer colesevelam are: 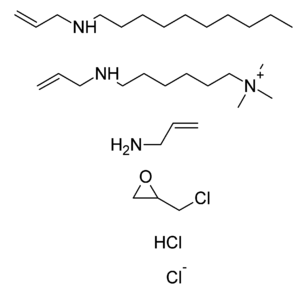 Colesevelam is part of a class of drugs known as bile acid sequestrants. Colesevelam hydrochloride, the active pharmaceutical ingredient in Welchol, is a non-absorbed, lipid-lowering polymer that binds bile acids in the intestine, impeding their reabsorption. As the bile acid pool becomes depleted, the hepatic enzyme, cholesterol 7-α-hydroxylase, is upregulated, which increases the conversion of cholesterol to bile acids. This causes an increased demand for cholesterol in the liver cells, resulting in the dual effect of decreasing transcription and activity of the cholesterol biosynthetic enzyme, HMG-CoA reductase, and increasing the number of hepatic LDL receptors. These compensatory effects result in increased clearance of LDL-C from the blood, resulting in decreased serum LDL-C levels. Serum TG levels may increase or remain unchanged.[3]

It is not yet known how Colesevelam works to help control blood sugar in people with type 2 diabetes. However, it is clear that the drug works within the digestive tract, since it is not absorbed into the rest of the body.

Since Colesevelam can lower total and LDL cholesterol levels (along with raising HDL - "good" cholesterol), taking it may decrease one's risk of developing certain health problems in the future.

The combination of Colesevelam with a HMG-CoA reductase inhibitor (known more commonly as a statin) can further lower cholesterol levels.[4]

The background incidence of flatulence and diarrhea was in patients in the same controlled clinical trials, the placebo were higher. Only constipation and dyspepsia were shown to occur in a higher percentage of patients who received Cholestagel, compared to the placebo reported. Side effects were generally mild or moderate in severity. In the application of colesevelam in combination with statins, no unexpected frequent side effects occurred.[5]