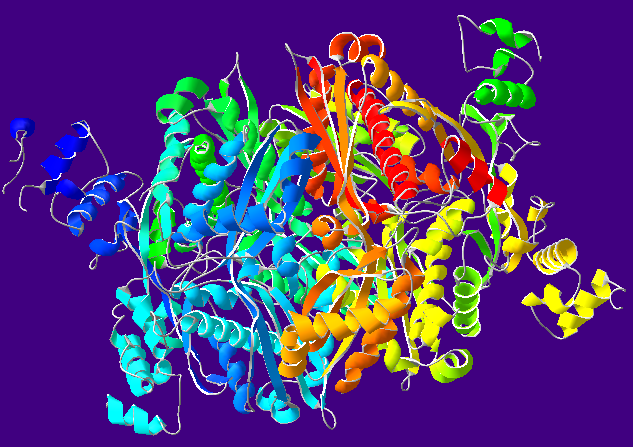 HMG-CoA reductase (or 3-hydroxy-3-methyl-glutaryl-CoA reductase or HMGR) is the rate controlling (EC number|1.1.1.88) of the pathway, the that produces and other isoprenoids. This enzyme is the target of the widely available cholesterol lowering drugs known collectively as the . HMG-CoA reductase is anchored in the membrane of the endoplasmic reticulum, and was long regarded as having seven transmembrane domains, with the active site located in a long carboxyl terminal domain in the cytosol. More recent evidence shows it to contain eight transmembrane domains [Roitelman, J., Olender, E.H., Bar-Nun, S., Dunn, W.A., Simoni, R.D. (1992) Immunological Evidence for 8 Spans in the Membrane Domain of 3-Hydroxy-3-Methylglutaryl Coenzyme A Reductase: Implications for Enzyme Degradation in the Endoplasmic Reticulum. J. Cell Biol. 117, 959-973.] .

In humans, the gene for HMG-CoA reductase is located on the long arm of the fifth (5q13.3-14). Related enzymes having the same function are also present in other animals, plants and bacteria.

Drugs
Drugs which inhibit HMG-CoA reductase, known collectively as s (or "statins"), are used to lower serum as a means of reducing the risk for cardiovascular disease.

These drugs include (Mevacor), (Lipitor), (Pravachol), and (Zocor).

Hormones
HMG-CoA reductase is active when blood glucose is high. The basic functions of and are to maintain glucose homeostasis. Thus, in controlling blood sugar levels they indirectly affect the activity of HMG-CoA reductase, but a decrease in activity of the enzyme is caused by an which responds to an increase in AMP concentration, and also to (see 4.4, Phosphorylation of reductase).

HMG-CoA reductase is a polytopic, transmembrane protein that catalyzes a key step in the mevalonate pathway [http://biocyc.org/META/NEW-IMAGE?type=PATHWAY&object=PWY-922] which is involved in the synthesis of sterols, isoprenoids and other lipids. In humans, HMG-CoA reductase is the rate-limiting step in cholesterol synthesis and represents the sole major drug target for contemporary cholesterol-lowering drugs.

The medical significance of HMG-CoA reductase has continued to expand beyond its direct role in cholesterol synthesis following the discovery that it can offer cardiovascular health benefits independent of cholesterol reduction [http://www.ncbi.nlm.nih.gov/entrez/query.fcgi?cmd=Retrieve&db=pubmed&dopt=Abstract&list_uids=15853754&query_hl=3&itool=pubmed_DocSum] . Statins have been shown to have anti-inflammatory properties [http://www.ncbi.nlm.nih.gov/entrez/query.fcgi?cmd=Retrieve&db=pubmed&dopt=Abstract&list_uids=16283973&query_hl=6&itool=pubmed_docsum] , most likely as a result of their ability to limit production of key downstream isoprenoids that are required for portions of the inflammatory response. Notably, blocking of isoprenoid synthesis by statins has shown promise in treating a mouse model of , an inflammatory autoimmune disease [http://www.ncbi.nlm.nih.gov/entrez/query.fcgi?cmd=Retrieve&db=pubmed&dopt=Abstract&list_uids=12858078&query_hl=6&itool=pubmed_docsum] .

HMG-CoA reductase is also an important developmental enzyme. Inhibition of its activity and the concomitant lack of isoprenoids that yields can lead to morphological defects [http://mirror.zfin.org/cgi-bin/webdriver?MIval=aa-pubview2.apg&OID=ZDB-PUB-040211-1] .

Transcription of the reductase gene

Transcription of the reductase is enhanced by the "" (SREBP). This protein binds to the "" (SRE), located on the 5' end of the reductase gene. When SREBP is inactive, it is bound to the ER or . When levels fall, SREBP is released from the membrane by and migrates to the nucleus, where it binds to the SRE and transcription is enhanced. If cholesterol levels rise, proteolytic cleavage of SREBP from the membrane ceases and any proteins in the nucleus are quickly degraded.

Translation of is inhibited by a derivative which has been reported to be [Meigs T.E., Roseman D.S. Simoni, R.D. (1996) Regulation of 3-hydroxy-3-methylglularyl-coenzyme A reductase degradation by the nonsterol mevalonate metabolite farnesol "in vivo". J. Biol. Chem. 271, 7916-7922.] , [Meigs T.E., Simoni R.D. (1997) Farnesol as a regulator of HMG-CoA reductase degradation: Characterization and role of farnesyl pyrophosphatase. Arch. Biochem. Biophys. 345, 1-9.] , although this role has been disputed [Keller R.K., Zhao, Z.H. Chambers C., Ness G.C. (1996) Farnesol is not the nonsterol regulator mediating degradation of HMG-CoA reductase in rat liver. Arch. Biochem. Biophys. 328, 324-330.] .

Rising levels of s increases the susceptibility of the reductase enzyme to . Helices 2-6 (total of 8) of the HMG-CoA reductase transmembrane domain sense the higher levels of cholesterol and this leads to Lysine 248 being exposed. This lysine residue can become ubiquinated, and this serves as a signal for proteolytic degradation. The (SCAP, SCREBP Cleavage Activating Protein) that activates SREBP is also sensitive to levels of sterols.