Princess Máxima of the Netherlands

Princess Máxima of the Netherlands

Born Máxima Zorreguieta in Buenos Aires, Argentina, on 17 May 1971, Princess Máxima is the daughter of Jorge Horacio Zorreguieta Stefanini (b. 1928) and his second wife María del Carmen Cerruti Carricart (b. 1944). She has two brothers, a sister and three half-sisters by her father's first wife Marta López Gil.[1]

She studied at Northlands School in Argentina and worked as an investment banker before graduating with a degree in Economics from the Universidad Católica Argentina in 1995. She subsequently worked for large international Finance companies in Argentina, New York and Europe.[citation needed]

Máxima met the heir to the Dutch throne in April 1999 in Sevilla, Spain, during the Seville Spring Fair: "Feria de abril de Sevilla." In an interview, they stated that he introduced himself only as "Alexander," so that she did not know he was a prince. She thought he was joking when he later told her he was a Prince. They agreed to meet again two weeks later in New York, where Máxima was working for Dresdner Kleinwort Benson. Their relationship apparently began in New York, but the Princess did not meet the Prince's parents, Queen Beatrix and Prince Claus, for some time.[citation needed]

The news of the couple's relationship and eventual marriage plans caused controversy in the Netherlands, due the involvement of Máxima's father as a cabinet minister during the regime of Argentine President Jorge Rafael Videla.[2] On request of the Dutch Parliament, Michiel Baud, a Dutch professor in Latin American studies, did an inquiry into the involvement of Zorreguieta in the "Dirty War". Although Zorreguieta claimed that, as a civilian, he was unaware of the "Dirty War" while he was a cabinet minister, Baud concluded that it would have been unlikely for a person in such a powerful position in the government to be unaware of the Dirty War. However, Baud's research determined that Máxima's father had not been directly involved with the many deaths during that period.[3] Even so, his possible presence at the royal wedding was debated for several months.[citation needed]

Approval for the marriage was granted by the Dutch parliament (necessary by law for the Prince of Orange to remain heir to the throne), but Máxima's father chose not to attend the wedding. Out of solidarity with her husband, Máxima's mother also remained absent from the wedding, held on 2 February 2002 in Amsterdam.[citation needed]

Máxima was granted Dutch citizenship by Royal Decree on 17 May 2001. This provoked complaints[by whom?] since such a grant before marriage is not customary in the Netherlands (but is required by Dutch law for a royal bride); under normal circumstances, citizenship takes several years to obtain.[citation needed] The Princess has dual citizenship: Argentine and Dutch.[4]

Máxima remained a Roman Catholic instead of converting to the denomination of the Prince, although they agreed that their children would be raised as Protestants.[citation needed]

Earlier the marriages of Princess Irene and Princess Christina to Roman Catholics, without approval from the Dutch parliament, led to their exclusion from the line of succession to the Dutch throne.[citation needed]

The couple announced their engagement on 30 March 2001; Princess Máxima addressed the nation in fluent Dutch during the directly televised broadcast.[5]

Princess Máxima and Prince Willem-Alexander were married on 2 February 2002 in a civil ceremony in the Beurs van Berlage, Amsterdam, which was then followed by a religious ceremony at Amsterdam's Nieuwe Kerk ("New Church").[6]

Princess Máxima is also godmother to two royal babies: Countess Leonore of Orange-Nassau (daughter of Prince Constantijn and Princess Laurentien of the Netherlands) and of Prince Sverre Magnus of Norway (son of Crown Prince Haakon and Crown Princess Mette-Marit of Norway).[citation needed]

By Royal Decree nr. 41 of 25 January 2002, upon the solemnization of marriage Máxima Zorreguieta was taken up into the Dutch nobility and the titles Princess of the Netherlands and Princess of Orange-Nassau, and the predicate Royal Highness, were formally granted to her.[7]

By Royal Decree nr. 42 of 25 January 2002, the Princess was granted her own personal coat of arms and a personal standard.[8]

On 13 May 2011 the Dutch parliament confirmed that when the Prince of Orange ascends the throne, Princess Máxima will take the style and title of Her Majesty The Queen of the Netherlands.[9]

Work as Princess of the Netherlands 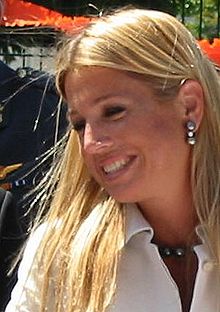 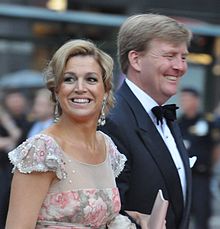 Máxima and her husband at the White House, 11 September 2009.

Princess Máxima focuses on the issue of integration of immigrants into Dutch culture. She was[when?] a member of a special parliamentary commission which sought to recommend ways to increase the participation of female immigrants in the workforce. Princess Máxima stresses the importance for immigrants of learning the Dutch language, (as she did), to fully participate in Dutch society. The Princess herself is trilingual; she speaks Dutch, English, and her native Spanish.

She participates in conferences around the world representing the Netherlands. The Princess was granted a seat in the Dutch Council of State on 20 October 2004[10], the highest advisory body and court of administration (established by Charles V, Holy Roman Emperor in 1531). She became a member of the Committee for Ethnic Minority Women’s Participation,[when?] has a seat on the board of governors of the Chair on the Management of Diversity and Integration at the Free University of Amsterdam, she (along with her husband) is a patron of the Orange Fund (established to promote social welfare and cohesion in the Netherlands), and she also chairs the Board of Trustees of the Prince Claus Chair of the University of Utrecht.[citation needed] The Princess was appointed in September 2009 by the UN Secretary-General, Ban Ki-Moon, as his Special Advocate for Inclusive Finance for Development because of her "extensive knowledge and expertise" on financial matters in developing countries.[citation needed] Similarly, in June 2011, Maxima became Honorary Patron of the G20 Global Partnership for Financial Inclusion to "strengthen the synergy between the UN and the G20 nations on promoting universal access to financial services".

She is one of the few royals in the world to be an open supporter of gay rights, and was the first royal to attend an LGBT rights conference.[when?][11] The Princess signed an accord at the end of the conference calling for the full acceptance of gays in The Netherlands. "The Princess is in favor of equal rights of all groups in the Netherlands," her spokesperson said.[citation needed] Queen Beatrix has spoken out a number of times in support of LGBT rights.[citation needed]