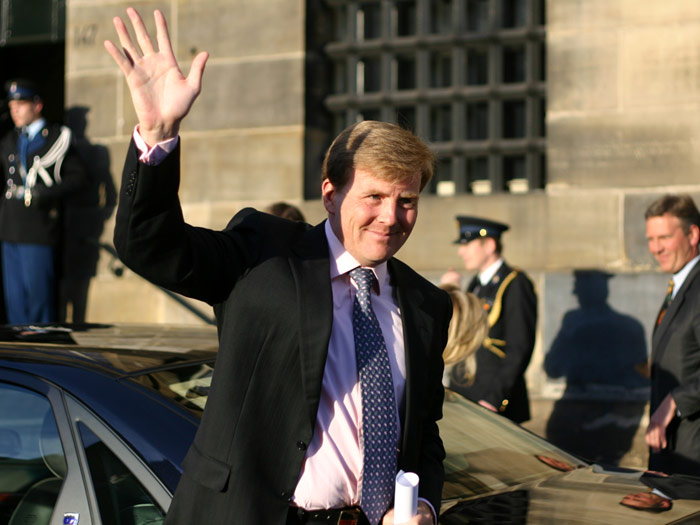 Willem-Alexander, Prince of Orange (in Dutch: Prins van Oranje). (given names: "Willem-Alexander Claus George Ferdinand"; born , ) is the eldest son of Queen Beatrix of the Netherlands and the heir apparent to the Dutch throne.

Willem-Alexander Claus George Ferdinand, The , Prince of the Netherlands, Prince of Orange-Nassau, van Amsberg is the eldest son of Queen and her late husband, Prince Claus of the Netherlands, Jonkheer van Amsberg. The Prince was born in Utrecht. His godparents are Prince Bernhard of the Netherlands (his grandfather), Prince Ferdinand von Bismarck, former Dutch Prime Minister Dr. , Gosta van Amsberg, Queen Margrethe II of Denmark (at the time Crown Princess of Denmark), and Renee Smith. He was educated at a high school in , and also attended the United World College of the Atlantic in Wales prior to university. He has been groomed in state affairs to assume the Dutch throne one day. He earned an in from and is interested in international water management issues.

Prince Willem-Alexander is an honorary member of the World Commission on Water for the 21st Century and patron of the Global Water Partnership, a body established by the , the , and the Swedish Ministry of Development. He was appointed as the Chairperson of the United Nations Secretary General’s Advisory Board on Water and Sanitation on December 12th, 2006.

The prince is a member of the Raad van State, the highest council to the Dutch government that is chaired by his mother, Queen Beatrix. As part of his Royal duties, he holds commissions in the Dutch Army (as brigadier), Navy (as commandeur) and Air Force (as commodore) and was a patron of the Dutch Olympic Games Committee until when he was made a member of the (IOC). To celebrate the 100 year anniversary of held in Amsterdam, he has expressed support to bid for the . [ [http://www.gamesbids.com/eng/olympic_bids/future_bids_2016/1216133621.html Netherlands May Bid For 2028 Games] ]

On behalf of the Crown, the Prince carries out various other representative duties.

He is an aircraft pilot and sportsman. In , the Prince flew as a volunteer for the "African Medical Research and Education Foundation" (AMREF) in , and in he spent a month flying for the Kenya Wildlife Service.To make sure he flies enough s a year, so that he can hold his license to fly, he also regularly flies the Dutch Royal Airplane when he and his family travel abroad.

Using the name "", one of the less well-known surnames of the , he has participated in the Marathon, where his aunt, Princess Christina, and several cousins live. In the Netherlands, he was a participant in the Frisian Eleven Cities ice skating marathon.

The Prince was also seen cheering on the Netherlands' national football team during their hosting year, at . He memorably gave a nervous laugh of disbelief as the Netherlands missed their second penalty of normal time against the Italians in the semi-final.

In a 1999 television interview, the Prince declared that he wouldn't marry in the next 10 years. At the time, he was 32 years old, and his father didn't marry until he was nearly 40.

Nonetheless, on , he married Máxima Zorreguieta Cerruti (born ), an Argentine woman of Spanish and Italian ancestry who, prior to their marriage, worked as an banker in .

Like all Dutch monarchs, Prince Willem-Alexander is a nominal member of the but, unlike the highly controversial to a Roman Catholic by his aunt, Princess Irene, religion was not a major issue in the Prince's marriage.

The prince is a direct descendant of , eldest daughter of British King George II. However, under the British Act of Settlement, Prince Willem-Alexander forfeited his (distant) succession rights to the throne of each of the sixteen s, because he married a Roman Catholic.

The issue of Máxima's father, was rather sensitive. He was a civilian member of the Videla , a that ruled Argentina from to . As a result of the controversy, Mr. Zorreguieta agreed not to attend the royal wedding when representatives of Prime Minister requested him to stay away.

When his mother Queen Beatrix became the queen regnant of the Netherlands, prince Willem-Alexander obtained the title "" as new heir to the Dutch throne.

He is the first male heir-apparent to the Dutch throne since Prince Alexander, son of King William III, who died in 1884. Prince Willem-Alexander has indicated that upon succeeding his mother, he would assume the throne under the title of King William IV of the Netherlands.

Prince Willem-Alexander is also heir-apparent to the following titles:

* [http://www.koninklijkhuis.nl/english/content.jsp?objectid=18184 The Prince of Orange]