Uto-Aztecan or Uto-Aztekan /ˈjuːtoʊ.æzˈtɛkən/ is a Native American language family consisting of over 30 languages. Uto-Aztecan languages are found from the Great Basin of the Western United States (Oregon, Idaho, Montana, Utah, California, Nevada, Arizona), through western, central and southern Mexico (incl. Sonora, Chihuahua, Nayarit, Durango, Zacatecas, Jalisco, Michoacán, Guerrero, San Luis Potosí, Hidalgo, Puebla, Veracruz, Morelos, Estado de México, and the Federal District), and one dialect of Nahuatl is nearly extinct in western El Salvador and has gone extinct in Guatemala and Honduras. Utah is named after the indigenous Uto-Aztecan Ute people. Classical Nahuatl, the language of the Aztecs, and its modern relatives are part of the Uto-Aztecan family.

Proposals as to the homeland

The Uto-Aztecan homeland is generally thought to have been somewhere in the Sonoran Desert (which encompasses Arizona, New Mexico and northern Mexico).[citation needed] The homeland of the Numic branch has been placed near Death Valley, California and the origin of the putative Southern Uto-Aztecan branch is thought to have been in northwestern Mexico, in today's southern Sonora state or northern Sinaloa state. 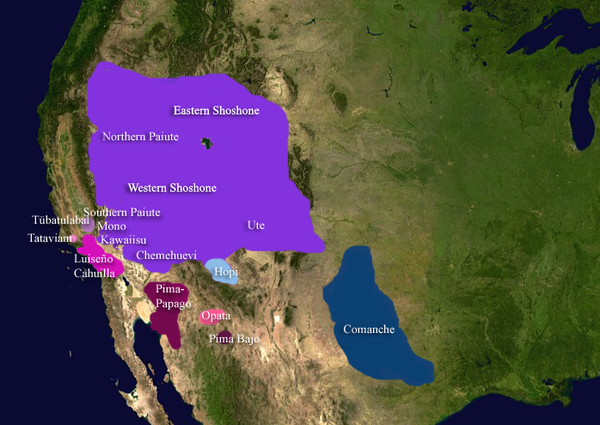 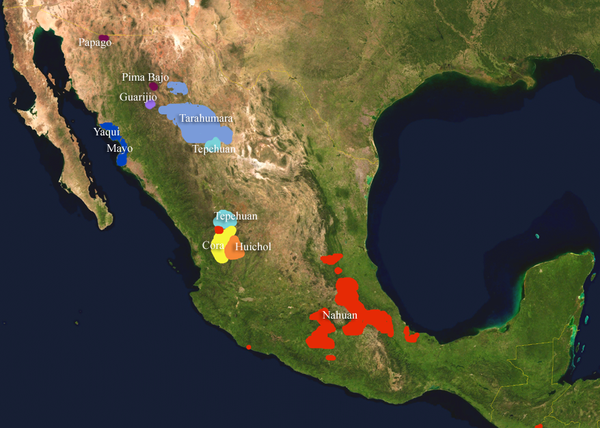 Uto-Aztecan has been accepted by linguists as a language family since the early 1900s, and six subgroups are universally accepted as valid: Numic, Takic, Pimic, Taracahitic, Corachol, and Aztecan. This leaves two ungrouped languages—Tübatulabal and Hopi (sometimes termed "isolates within the family"). As to higher level groupings, disagreement has persisted since the 19th century. Presently there is also disagreement as to where to draw language boundaries within dialect continua.

The similarities between the Uto-Aztecan languages were noted as early as 1859 by J.C.E. Buschmann, who however failed to recognize the genetic affiliation between the Aztecan branch and the rest, instead ascribing the similarities between the two groups to diffusion. Brinton added the Aztecan languages to the family in 1891 and coined the term Uto-Aztecan. John Wesley Powell, however, rejected the claim in his own classification of North American indigenous languages (also published in 1891). Powell recognized two language families: "Shoshonean" (encompassing Takic, Numic, Hopi, and Tübatulabal) and "Sonoran" (encompassing Pimic, Taracahitan, and Corachol). In the early 1900s Alfred L. Kroeber filled in the picture of the Shoshonean group, while Edward Sapir proved the unity between Aztecan, "Sonoran", and "Shoshonean". Sapir's applications of the comparative method to unwritten Native American languages are regarded as groundbreaking.[citation needed]

As of about 2000, the most widely accepted view divides the family into "Northern Uto-Aztecan" and "Southern Uto-Aztecan". The former is Powell's "Shoshonean", while the latter is all the rest, i.e., Powell's "Sonoran" plus Aztecan. But since about 1980, there have been dissenters. They reject either both nodes or the Northern node alone.[1][2][3] Although Kaufman recognizes similarities between Corachol and Aztecan, he explains them by diffusion instead of genetic evolution.[4] Most scholars view the breakup of Proto-Uto-Aztecan as a case of the gradual disintegration of a dialect continuum.[5]

Below is the current most prevalent classification as synthesized from Campbell (1997), Mithun (1999), and Goddard (1999). For most of the individual languages and proposed nodes, links are provided to a selected bibliography of grammars, dictionaries, and linguistic researches. ( † = extinct)

In addition to the above languages for which linguistic evidence exists, there were several dozen extinct languages with little or no documentation in Northern Mexico, many of which were probably Uto-Aztecan.[6]

Proto-Uto-Aztecan is reconstructed as having an unusual five-vowel system: *i *a *u *o *ɨ. Langacker (1970) demonstrated that the fifth vowel should be reconstructed as *ɨ as opposed to *e—there had been a long-running dispute over the proper reconstruction.[7]

*n and *ŋ may have actually been *l and *n, respectively.

Grammars or linguistic researches for individual languages and Uto-Aztecan groupings