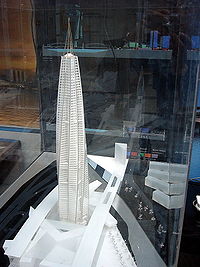 Okhta Centre (Russian: О́хта-це́нтр), known before March 2007 as Gazprom City (Russian: Газпро́м-си́ти), is a construction project of a business centre in Saint Petersburg, Russia. It will include the first supertall skyscraper in the city, museums and a concert hall. The 403-metre main tower of Okhta Centre is set to be the tallest building in Europe amongst live building proposals.

On November 15, 2005, Gazprom CEO Alexei Miller and Saint Petersburg governor Valentina Matviyenko announced the intention of Sibneft to build the Gazprom City Business centre. The plans included a 300 metre-high skyscraper with its headquarters on the right bank of the Neva River 59°56′37.6″N 30°24′27.1″E﻿ / ﻿59.943778°N 30.407528°E﻿ / 59.943778; 30.407528﻿ (original site), across from the Smolny Cathedral, despite the fact that current regulations forbid construction of a building of more than 42 (48 with expert approval) metres high there. The plans were later revised to increase the height of the skyscraper to more than 400 metres.

On March 20, 2006, Gazprom and the city signed an agreement under which Sibneft agreed to pay 20 billion rubles of taxes to the city annually after moving there, which was supposed to occur in the near future, while St. Petersburg agreed to allocate 60 billion rubles during ten years for the project's construction.[3]

On December 1, 2006, Gazprom and the city authorities announced that the British architectural firm RMJM London Ltd. had been chosen to build the centre by a committee consisting of four foreign architects (in fact, three of the four architects, namely Norman Foster, Rafael Viñoly and Kisho Kurokawa, retired from the jury before it convened, opposing all of the shortlisted designs because of their height),[4] four representatives of the St. Petersburg City Administration, including Matviyenko herself, and representatives of Gazprom: Alexei Miller, Valery Golubev (Deputy CEO Gazprom, Head of the Department for Construction and Investment of Gazprom, former Head of the Vasileostrovsky Administrative District of St. Petersburg) and Alexander Ryazanov (President of Gazprom Neft, fired on November 17 during the competition). The construction of the entire Gazprom City is supposed to be completed by 2016.

The proposed twisting tower is inspired by a Swedish fortress named Landskrona (not to be confused with the town of that name), occupied the site in early 14th century, and another fortress Nyenschantz on the site until 18th century in the form of a five-sided star to maximise views for defensive purposes.[5] The inspiration for the design also comes from energy in water, with the building form deriving its shape from the changing nature of water and ever changing light. It gives a new interpretation to the historical fortresses with modern aesthetics and technology - transparency and democracy, internal and external interactions. It also features a unique environmental strategy, which acts as a low energy double-layered skin of the tower allowing maximum daylight and minimum heat loss in the extreme climate of the city.[6]

In March 2007 the project was renamed from Gazprom City to Okhta centre (after the river of Okhta). It was also decided that Gazprom Neft would allocate 51% of funds for the construction project, while city budget would account for only 49%.[7]

In late 2008, St. Petersburg Governor Valentina Matviyenko introduced an amendment into the city budget delaying investment in the Okhta centre for the first half of 2009. The reason was due to the current financial crisis.[8]

In December 2010, Governor Matviyenko announced that the project plan on the Okhta site was abandoned and will be built in the outskirts of the city.[9]

The new planned site is farther from the historic center of St. Petersburg, on the northern shore of the Neva Bay (Gulf of Finland). This site is on the Primorskoye Highway (Приморское Шоссе), in the Laktha area of the Primorsky District, northwest of Vasilyevsky Island.[10] Although the new site is nowhere near the Okhta River, the project's name has not changed.

Construction of the project at the Lakhta site is supposed to resolve the conflicts that previously existed with the city's laws concerning cultural preservation. Some aspects of the design, including the height of the skyscraper, may need to be adjusted in accordance with the engineering and geologic characteristics of the new site.[11]

Alexei Miller claimed that he is "positive that St. Petersburg’s citizens will be proud of these new architectural masterpieces."[12] However, the Director of the Hermitage Museum, Mikhail Piotrovsky, has spoken out against the plan. Russia's culture ministry has also been reported to object to the tower's plan.[13] The Saint Petersburg Union of Architects also voiced opposition to it in July 2006, as did many other citizens.[14] In October 2009, about 3,000 people protested against the tower in St. Petersburg, arguing that it would spoil the city's historic skyline.[13]

As the historical centre of St. Petersburg is a World Heritage Site in 1991; in December 2006 UNESCO World Heritage centre Director Francesco Bandarin reminded Russia about its obligations to preserve it and expressed concern over the project.[15] In 2007, the World Monuments Fund placed the historic skyline of St. Petersburg on its 2008 Watch List of 100 Most Endangered Sites due to the potential construction of the building, and in 2009 reported that the tower "would damage the image of Russia."[16]

In 2010 it was reported by Russian and UK press that the project's Chief Architect Charles Phu said at a public debate in London that the architect has been getting regular memoranda from Russian Prime Minister Vladimir Putin, encouraging them to go ahead with the project of Okhta Centre and promising support from the government.[17][18][19] This was proved to be untrue according to Putin, Phu himself and the debate participants.[20][21] This controversial report, followed by heated public discussions, has resulted in certain impact on the politics in Russia. 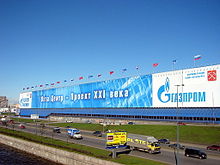 Original Okhta centre construction site. The inscription says: "Okhta centre is a project of the 21st century". Three types of flags are there: of Saint Petersburg, of Russia and of Gazprom