NASA TV (originally NASA Select) is the television service of the United States government agency NASA. NASA TV is broadcast by satellite with a simulcast over the Internet. Local cable television systems across the U.S. and amateur television repeaters may carry NASA TV at their discretion, as NASA-created content is considered a work of the U.S. government and is in the public domain. The network was formally created in the early 1980s to provide NASA managers and engineers with real-time video of missions.[2][3] NASA has operated a television service since the beginning of the space program for archival purposes, and in order to provide media outlets with video footage.[4]

The network airs a large amount of educational programming, and provides live coverage of an array of manned missions, including the Space Shuttle and International Space Station (ISS), robotic missions, and international launches. The network completed its conversion from analog to digital transmission in late 2005 following the launch of STS-114, ending a period of dual analog and digital broadcasting, although some cable television systems may still have transmitted in analog prior to the U.S. digital television transition. The satellite link uses the DVB-S system for transmission. 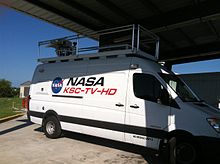 NASA TV operates four channels. The "Public Channel" provides 24-hour broadcasting of live and recorded events and documentaries aimed toward the general public. The "Education Channel" provides space and science programming for schools, museums, and other educational institutions. The "Media Channel" is dedicated to broadcast news organizations and other members of the press, featuring press release video, interviews, mission press conferences and other services. The final is the "Space Operations Channel", an internal, encrypted feed for NASA spaceflight operations.[2][5]A high definition simulcast of the "Public Channel" launched on July 19, 2010.[6]

The NASA TV website also provides a channel featuring continuous live footage from inside and outside the ISS, established to celebrate the 10th anniversary of the station in orbit,[7] as well as a continuous audio-only channel of ISS and Shuttle mission audio.[8] 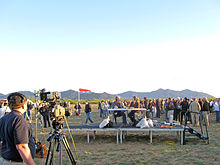 NASA TV carries a variety of regularly scheduled, pre-recorded educational and public relations programming 24 hours a day on its various channels. Programs include NASA Gallery, which features photographs and video from NASA's history; Video File, which broadcasts b-roll footage for news and media outlets; Education File, which provides special programming for schools; This Week @ NASA, which shows news from NASA centers around the country; and NASA Edge and NASA 360, hosted programs that focus on various projects and activities within NASA. Live ISS coverage and related commentary is aired in hour-long segments throughout the day.[9]

The network also provides an array of live programming, such as 24-hour coverage of Space Shuttle missions, ISS events (spacewalks, media interviews, educational broadcasts), press conferences and rocket launches. These often include running commentary by members of the NASA Public Affairs Office who serve as the "voice of Mission Control", including Rob Navias, Josh Byerly, Nicole Cloutier and Brandi Dean.

Prior to 2007, the Canadian Radio-television and Telecommunications Commission (CRTC) prohibited NASA TV from being aired by local satellite and cable systems, with the exception of specific broadcast events.[10] On April 20, 2007, the Commission issued a notice stating that after receiving an initial request from Mountain Cablevision and support from other Canadian broadcasters and members of the public, NASA TV had been added to the lists of eligible satellite services.[11]

NASA has used external companies to provide streaming services for internet viewers, both embedded into NASA's website and through streams branded by those companies. The variety of stream formats used have varied with the available technology and with the popularity of formats, including RealMedia, QuickTime, Windows Media, and Flash Video.

In July 2005, NASA entered into an agreement with Yahoo! and Akamai Technologies to provide streaming services for NASA TV ahead of the STS-114 mission and associated Return to Flight program after the Space Shuttle Columbia disaster.[12] As of 2011[update], NASA has entered agreements with Ustream to provide high definition streaming of NASA TV and high definition cameras aboard the International Space Station, along with mission audio. Archives of press conferences, NASA Tweetups, and other events are also made available via UStream.[13] Other NASA TV programs and events are archived via the NASA TV YouTube channel.

In 2009, NASA TV received two Emmy Awards. On January 24, the Midsouth Chapter of the Academy of Television Arts & Sciences awarded NASA TV and the Marshall Space Flight Center with the Governor's Award for Lifetime Achievement in recognition of NASA's 50th anniversary.[14] On August 22, NASA TV was awarded a national Primetime Emmy Award, the Philo T. Farnsworth Award, for engineering excellence in recognition of the 40th anniversary of Apollo 11's first television broadcast from the surface of the moon.[15][4]