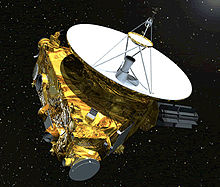 The spacecraft New Horizons launched in 2006 towards Pluto

The New Frontiers program is a series of space exploration missions being conducted by NASA with the purpose of researching several of the Sun's planets including Jupiter, Venus, and the dwarf planet Pluto. NASA is encouraging both domestic and international scientists to submit mission proposals for the project.

New Frontiers was built on the innovative approach used by the Discovery and Explorer Programs of principal investigator-led missions. It is designed for medium-class missions that cannot be accomplished within the cost and time constraints of Discovery, but are not as large as Flagship-class missions. There are two current New Frontiers missions, New Horizons which launched on January 19, 2006, and Juno which launched on August 5, 2011.

The New Frontiers Program was developed, advocated, and successfully proposed by NASA and the Administration and granted by Congress in CY 2002 and 2003. This effort was led by two long-time NASA executives at Headquarters at that time: Dr. Edward Weiler, Associate Administrator of Science and Dr. Colleen Hartman, Solar System Exploration Division Director. The mission to Pluto had already been selected before this program was successfully endorsed and funded, so the mission to Pluto, called New Horizons, was "grandfathered" into the New Frontiers program. The 2003 Decadal Survey from the National Academy of Sciences identified destinations that then served as the source of the first competition for the New Frontiers Program. The program name was selected by Dr. Hartman based on President John F. Kennedy's speech in 1960, in which he said "We stand, today, on the edge of a New Frontier."

New Horizons, a mission to Pluto, was launched on January 19, 2006, and is on its way to the dwarf planet. After a Jupiter gravity assist in February 2007 the craft has continued towards Pluto. The primary mission flyby will occur in July 2015 and then the spacecraft will be targeted toward one or more additional Kuiper Belt objects between 2015 and 2020. 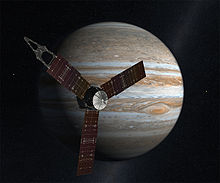 Juno in front of Jupiter

Juno is a Jupiter exploration mission launched on August 5, 2011. It is the first solar-powered spacecraft to explore an outer planet. The craft will attain a polar orbit in order to study the planet's magnetic field and internal structure. NASA’s Galileo mission to Jupiter provided extensive knowledge about its upper atmosphere. However, further study of Jupiter is crucial not only to the understanding of its origin and nature of the solar system, but also of giant extrasolar planets in general. This proposal submits[clarification needed] for spacecraft investigations that can achieve the majority of the following objectives for Jupiter:

On May 25, 2011, NASA selected The Origins Spectral Interpretation Resource Identification Security Regolith Explorer spacecraft (OSIRIS-REx) as the 3rd New Frontiers mission.[1] This mission will rendezvous and orbit a primitive asteroid, 1999 RQ36, in 2020. After extensive measurements, instruments would collect material from the asteroid's surface for return to Earth in 2023. The mission, excluding the launch vehicle, is expected to cost approximately $800 million. The returned samples will help scientists better understand and answer long-held questions about the formation of our solar system and the origin of complex molecules necessary for life.

The Venus In Situ Explorer would study the composition and surface properties of Venus. The primary science objectives of this mission would be to examine the physics and chemistry of Venus’s atmosphere and crust. The mission should attempt to characterize variables that cannot be measured from orbit, including the detailed composition of the lower atmosphere, and the elemental and mineralogical composition of surface materials. Had the proposed SAGE mission been selected, the Venus In Situ Explorer would have been removed from consideration.[2]

Although the exploration of the surface and lower atmosphere of Venus provides a major technical challenge, the scientific rewards are major. Venus is Earth’s sister planet, yet its tectonics, volcanism, surface-atmospheric processes, atmospheric dynamics and chemistry are all remarkably different from those on Earth, which has resulted in remarkably different end states for its surface crust and atmosphere. While returning physical samples of its surface and/or atmosphere may not be possible within the New Frontiers cost cap, innovative approaches might achieve the majority of the following objectives:

The surface of the South Pole-Aitken basin, located on the Moon’s far side southern polar region, is likely to contain some fraction of the mineralogy of the Moon’s lower crust. Samples of these ancient materials that are not biased by nearside impact basin formation are highly desirable to further understand the history of Earth’s Moon. Therefore, a mission to return a sufficient sample of material from the heretofore-unsampled South Pole-Aitken basin terrain, including useful samples from the deep crust of the early Moon, should accomplish (following chemical, isotopic, and petrologic analysis of returned materials as well as radiometric age dating on Earth) the majority of following science objectives:

The Trojan Tour and Rendezvous mission would fly by two or more Jupiter Trojans, asteroids that orbit around the L4 and L5 Lagrange points at the same distance from the sun as Jupiter, and then settle into orbit around one of them - similar goals to the Dawn mission, though significantly further from the Sun.

A Comet Surface Sample Return mission would acquire and return to Earth a macroscopic sample from the surface of a comet nucleus using a sampling technique that preserves organic material in the sample.

Detailed study of comets promises the possibility of understanding the physical condition and constituents of the very early solar system, including the early history of water and the biogenic elements and the compounds containing them. Therefore, a mission that would sample and return the dust and organics from at least one if not several locations on the surface of a comet nucleus, including one in the vicinity of an active vent, is of prime interest in order to achieve the majority of the following science objectives:

A Saturn Probe mission would deploy a probe into Saturn’s atmosphere to determine the structure of the atmosphere as well as noble gas abundances and isotopic ratios of hydrogen, carbon, nitrogen, and oxygen. A carrier/relay craft with the probe would arrive at Saturn approximately seven years after launch. Thirty days or more before arrival, the probe separates from the carrier/relay craft. The probe would enter the atmosphere and begin measurements at 0.1 bars (a bar is the atmospheric pressure at sea level on Earth). At 1 bar, the probe would detach from its parachute for a more rapid descent to 5 bars and the end of the nominal mission after 55 minutes of data collection. The probe would be designed to survive to 10 bars, and the carrier/relay would continue to listen for as long as the entry site remains visible.

In addition to the five mission concepts listed above, for the 5th New Frontiers mission, the 2013 Planetary Science Decadal Survey committee identified two additional candidates that will be added to the list.[2]

The focus of this mission is to determine the internal structure of Io and to investigate the mechanisms that contribute to the satellite’s intense volcanic activity from a highly elliptical orbit around Jupiter, making multiple flybys of Io. This mission depends on sufficient advances in system power and radiation protection.[4]

This mission consists of several identical landers distributed across the lunar surface, each carrying geophysical instrumentation. The primary science objectives are to characterize the Moon’s internal structure, seismic activity, global heat flow budget, bulk composition, and magnetic field. It would expand the instruments left on the surface on the moon left by Apollo program missions to include coverage of the far side of the moon as well.[4]