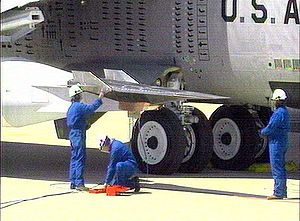 NASA technicians working on the X-43A at the tip of a Pegasus rocket mounted to a Boeing B-52B prior to launch on March 27, 2004.

The X-43 is an unmanned experimental hypersonic aircraft with multiple planned scale variations meant to test various aspects of hypersonic flight. It was part of NASA's Hyper-X program. It has set several airspeed records for jet-propelled aircraft.[1]

A winged booster rocket with the X-43 itself at the tip, called a "stack", is launched from a carrier plane. After the booster rocket (a modified first stage of the Pegasus rocket) brings the stack to the target speed and altitude, it is discarded, and the X-43 flies free using its own engine, a scramjet. 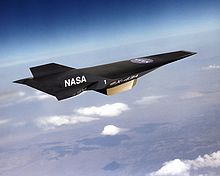 Artist's concept of X-43A with scramjet attached to the underside

The initial version, the X-43A, was designed to operate at speeds greater than Mach 7, about 8,050 km/h at altitudes of 30,000 m or more. The X-43A is a single-use vehicle and is designed to crash into the ocean without recovery. Three of them have been built: the first was destroyed; the other two have successfully flown, with the scramjet operating for approximately 10 seconds, followed by a 10 minute glide and intentional crash.

The first flight in June 2001 failed when the stack spun out of control about 11 seconds after the drop from the B-52 carrier plane. It was destroyed by the Range Safety Officer, and it crashed into the Pacific Ocean. NASA attributed the crash to several inaccuracies in data modeling for this test, which led to an inadequate control system for the particular Pegasus used.

The X-43A's successful second flight made it the fastest free flying air-breathing aircraft in the world.

The most recent success in the X-plane series of aircraft until it was replaced by the X-51, the X-43 was part of NASA's Hyper-X program, involving the American space agency and contractors such as Boeing, MicroCraft Inc, Orbital Sciences Corporation and General Applied Science Laboratory (GASL). MicroCraft Inc., now known as ATK GASL, built the X-43A and its engine.

The X-43A aircraft was a small unpiloted test vehicle measuring just over 3.7 m in length.[2] The vehicle was a lifting body design, where the body of the aircraft provides a significant amount of lift for flight, rather than relying on wings. The aircraft weighed roughly 3,000 pounds (about 1,300 kilograms). The X-43A was designed to be fully controllable in high-speed flight, even when gliding without propulsion. However, the aircraft was not designed to land and be recovered. Test vehicles crashed into the Pacific Ocean when the test was over.

Traveling at Mach speeds produces a lot of heat due to the compression shock waves involved in supersonic drag. At high Mach speeds, heat can become so intense that metal portions of the airframe melt. The X-43A compensated for this by cycling water behind the engine cowl and sidewall leading edges, cooling those surfaces. In tests, the water circulation was activated at about Mach 3. In the future, fuel may be cycled through such areas instead, much like what is currently done in many liquid-fuel rocket nozzles and high speed planes such as the SR-71. 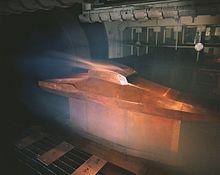 The craft was created to develop and test an exotic type of engine called a supersonic-combustion ramjet, or "scramjet", an engine variation where external combustion takes place within air that is flowing at supersonic speeds. The X-43A's developers designed the aircraft's airframe to positively affect propulsion, just as it affects aerodynamics: in this design, the forebody is a part of the intake airflow, while the aft section functions as a nozzle.

The engine of the X-43A was primarily fueled with hydrogen. In the successful test, about two pounds (or roughly one kilogram) of the fuel was used. Unlike rockets, scramjet-powered vehicles do not carry oxygen onboard for fueling the engine. Removing the need to carry oxygen significantly reduces the vehicle's size and weight. In the future, such lighter vehicles could bring heavier payloads into space or carry payloads of the same weight much more efficiently.

Scramjets only operate at speeds in the range of Mach 4.5 or higher, so rockets or other jet engines are required to initially boost scramjet-powered aircraft to this base velocity. In the case of the X-43A, the aircraft was accelerated to high speed with a Pegasus rocket launched from a converted Boeing B-52 Stratofortress bomber. The combined X-43A/Pegasus vehicle was referred to as the "stack" by the program's team members.

The engines in the X-43A test vehicles were specifically designed for a certain speed range, only able to compress and ignite the fuel-air mixture when the incoming airflow is moving as expected. The first two X-43A aircraft were intended for flight at approximately Mach 7, while the third flew at nearly Mach 10.

The X-43A being dropped from under the wing of a B-52B Stratofortress.

NASA's first X-43A test on June 2, 2001 failed because the Pegasus booster lost control about 13 seconds after it was released from the B-52 carrier. The rocket experienced a control oscillation as it went transonic, eventually leading to the failure of the rocket's starboard elevon. This caused the rocket to deviate significantly from the planned course, so the stack was destroyed by onboard explosives as a safety precaution. An investigation into the incident stated that imprecise information about the capabilities of the rocket as well as its flight environment contributed to the accident, though no single factor could ultimately be blamed for the failure.[citation needed]

In the second test in March 2004, the Pegasus fired successfully and released the test vehicle at an altitude of about 29,000 metres (95,000 ft). After separation, the engine's air intake was opened, the engine ignited, and the aircraft then accelerated away from the rocket reaching mach 6.83. Fuel was flowing to the engine for eleven seconds, a time in which the aircraft traveled more than 24 km. After burnout, controllers were still able to maneuver the vehicle and manipulate the flight controls for several minutes as the aircraft was slowed down by wind resistance and took a long dive into the Pacific. Peak speed was at burnout of the Pegasus but the scramjet engine did accelerate the vehicle in climbing flight, after a small drop in speed following separation.[citation needed]

Future of the scramjet

After the X-43 tests in 2004, NASA Dryden engineers said that they expected all of their efforts to culminate in the production of a two-stage-to-orbit crewed Vehicle in about 20 years. The scientists expressed much doubt that there would be a Single Stage to Orbit crewed vehicle like the National Aerospace Plane (NASP) in the foreseeable future, also known as the "Orient Express", that would take off from an ordinary airport runway.

Other X-43 vehicles were designed, but as of November 2004[update] appear to have been suspended. They were expected to have the same basic body design as the X-43A, though the aircraft were expected to be moderately to significantly larger in size.

The X-43B, was expected to be a full-size vehicle, incorporating a turbine-based combined cycle (TBCC) engine or a rocket-based combined cycle (RBCC) ISTAR engine. Jet turbines or rockets would initially propel the vehicle to supersonic speed. A ramjet might take over starting at Mach 2.5, with the engine converting to a scramjet configuration at approximately Mach 5.

The X-43C would have been somewhat larger than the X-43A and was expected to test the viability of hydrocarbon fuel, possibly with the HyTech engine. While most scramjet designs have used hydrogen for fuel, HyTech runs with conventional kerosene-type hydrocarbon fuels, which are more practical for support of operational vehicles. The building of a full-scale engine was planned which would use its own fuel for cooling. The engine cooling system would have acted as a chemical reactor by breaking long-chain hydrocarbons into short-chain hydrocarbons for a rapid burn.

The X-43C was indefinitely suspended[7] in March 2004. The linked story reports the project's indefinite suspension and the appearance of Rear Admiral Craig E. Steidle before a House Space and Aeronautics subcommittee hearing on March 18, 2004. In mid-2005 the X-43C appeared to be funded through the end of the year.[8]

The X-43D would have been almost identical to the X-43A, but expanding the speed envelope to approximately Mach 15. As of September 2007, only a feasibility study had been conducted by Donald B. Johnson of Boeing and Jeffrey S. Robinson of NASA's Langley Research Center. According to the introduction of the study, "The purpose of the X-43D is to gather high Mach number flight environment and engine operability information which is difficult, if not impossible, to gather on the ground."[9]