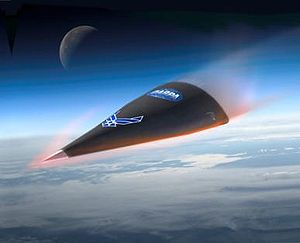 The DARPA Falcon Project (Force Application and Launch from Continental United States) is a two-part joint project between the Defense Advanced Research Projects Agency (DARPA) and the United States Air Force (USAF) and is part of Prompt Global Strike.[1] One part of the program aims to develop a reusable, rapid-strike Hypersonic Weapon System (HWS), now retitled the Hypersonic Cruise Vehicle (HCV), and the other is for the development of a launch system capable of accelerating a HCV to cruise speeds, as well as launching small satellites into earth orbit. This two-part program was announced in 2003 and continued into 2006.[2]

The latest project to be announced under the Falcon banner was a fighter-sized unmanned aircraft called "Blackswift" which would take off from a runway and accelerate to Mach 6 before completing its mission and landing again. The memo of understanding between DARPA and the USAF on Blackswift—also known as the HTV-3X—was signed in September 2007. The Blackswift HTV-3X did not receive needed funding and was canceled in October 2008.[3]

The aim was always to be able to deploy a craft from the continental United States, which could reach anywhere on the planet within an hour or two. The X-20 Dyna-Soar in 1957 was the first publicly acknowledged program—although this would have been launched vertically on a rocket and then glided back to Earth, as the Space Shuttle does, rather than taking off from a runway. Originally, the Shuttle was envisaged as a part-USAF operation, and separate military launch facilities were built at Vandenberg AFB at great cost, though never used. After the open DynaSoar USAF program from 1957–1963, spaceplanes went black. In the mid-1960s, the CIA began work on a high-Mach spyplane called Project Isinglass. This developed into Rheinberry, a design for a Mach-17 air-launched reconnaissance aircraft, which was later canceled.[4]

According to Henry F. Cooper, who was the Director of the Strategic Defense Initiative ("Star Wars") under President Reagan, spaceplane projects swallowed $4 billion in the 1970s, 1980s and 1990s (excluding the Space Shuttle). This does not include the 1950 and 1960s budgets for the Dynasoar, ISINGLASS, Rheinberry, and any 21st-century spaceplane project which might emerge under Falcon. He told the United States Congress in 2001 that all the United States had in return for those billions of dollars was "one crashed vehicle, a hangar queen, some drop-test articles and static displays".[5] Others would argue that Falcon—which has been allocated US$170 million for budget year 2008[6]—and its predecessors maintain the United States' capability to develop a spaceplane quickly, should the need arise.

The overall FALCON program announced in 2003 had two major components: a small launch vehicle for carrying payloads to orbit or launching the hypersonic weapons platform payload, and the hypersonic vehicle itself.[2]

The DARPA FALCON solicitation in 2003 asked for bidders to do development work on proposed vehicles in a first phase of work, then one or more vendors would be selected to build and fly an actual launch vehicle. Companies which won first phase development contracts of $350,000 to $540,000 in November 2003 included:[7]

The first phase of the hypersonic weapon system development was won by three bidders in 2003, each receiving a $1.2 to $1.5 million contract for hypersonic vehicle development:[7]

Lockheed Martin received the only Phase 2 HWS contract in 2004, to develop technologies further and reduce technology risk on the program.[citation needed] 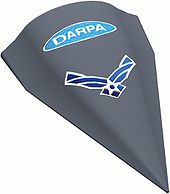 Illustration of HTV-2 from DARPA

Following the Phase 2 contract, DARPA and the US Air Force continued to develop the hypersonic vehicle platform.

The program was to follow a set of flight tests with a series of hypersonic technology vehicles.[8]

The Blackswift was a proposed aircraft capable of hypersonic flight designed by the Lockheed Martin Skunk Works, Boeing, and ATK.[15]

The USAF states that the "Blackswift flight demonstration vehicle will be powered by a combination turbine engine and ramjet, an all-in-one power plant. The turbine engine accelerates the vehicle to around Mach 3 before the ramjet takes over and boosts the vehicle up to Mach 6."[16] Dr. Stephen Walker, the Deputy Director of DARPA's Tactical Technology Office, will be coordinating the project. He told the USAF website,

I will also be communicating to Lockheed Martin and Pratt & Whitney on how important it is that we get the technical plan in place ... I'm trying to build the bridge at the beginning of the program—to get the communication path flowing.

The Falcon program has announced the hypersonic horizontal take-off Blackswift/HTV-3X. It is also launching the HTV-2 off the top of a rocket booster.[17] Falcon seems to be converging from two directions, on the ultimate goal of producing a hypersonic aircraft which can take off and land from a runway in the USA, and be anywhere in the world in an hour or two. Falcon is methodically proceeding toward a Hypersonic Cruise Vehicle. Dr. Walker stated,

In October 2008 it was announced that HTV-3X or Blackswift did not receive needed funding in the fiscal year 2009 defense budget and had been canceled. The Hypersonic Cruise Vehicle program will continue with reduced funding.[3][19] 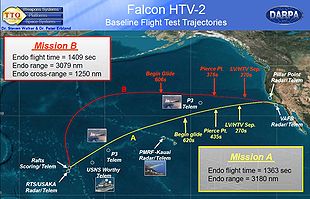 Flight Test trajectories for HTV 2a and 2b

DARPA had two HTV-2s built for two flight tests in 2010 and 2011. The Minotaur IV Lite rocket is the booster for the HTV-2 with Vandenberg Air Force Base serving as the launch site. DARPA planned the flights to demonstrate thermal protection systems and aerodynamic control features.[3][10] Test flights were supported by NASA, the Space and Missile Systems Center, Lockheed Martin, Sandia National Laboratories and the Air Force Research Laboratory's (AFRL) Air Vehicles and Space Vehicles Directorates.

The first HTV-2 flight was launched on 22 April 2010.[10] The HTV-2 glider was to fly 4,800 miles (7,700 km) across the Pacific to Kwajalein at Mach 20.[17] The launch was successful, but the first mission was not completed as planned. Reports stated that contact had been lost with the vehicle nine minutes into the mission.[20][21] In mid-November DARPA revealed that the test flight had ended when the computer autopilot had "commanded flight termination". According to a DARPA spokesman, "When the onboard system detects [undesirable or unsafe flight] behavior, it forces itself into a controlled roll and pitchover to descend directly into the ocean." Reviews found that the craft had begun to roll violently.[22]

A second flight was launched on 11 August 2011. The unmanned Falcon HTV-2 successfully separated from the booster and entered the mission's glide phase, but again lost contact with control about nine minutes into its planned 30-minute Mach 20 glide flight. Initial reports indicated it purposely impacted the Pacific Ocean along its planned flight path as a safety precaution.[23][24][25] Some analysts think that the second failure will result in an overhaul of the Falcon program.[26]

On 17 November 2011 there was a successful hypersonic glide test flight launched via rocket from Hawaii of the Advanced Hypersonic Weapon {AHW). The target was on Kwajalein atoll in the Marshall Islands. The AHW has a shorter range than the HTV-2 and is also part of the Prompt Global Strike program.[27][importance?]