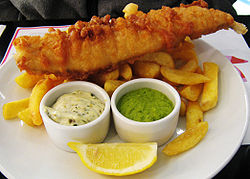 Mushy peas are dried marrowfat peas which are first soaked overnight in water and then simmered with a little sugar and salt until they form a thick green lumpy soup. They are a traditional British accompaniment to fish and chips[1] and sometimes mint is used as a flavouring. All over Britain, but particularly associated with Northern England they are commonly served as part of the popular snack of pie and peas (akin to the Australian pie floater, but with mushy peas instead of a thick pea soup) and are considered a part of traditional British cuisine. Mushy peas can also be bought in tinned cans. They are also sometimes served in batter as a pea fritter.[citation needed]

In Yorkshire, Nottinghamshire, Derbyshire and parts of Lincolnshire, they are often served as a snack on their own. They are traditionally accompanied by mint sauce, and sold at open-air events such as fairs or fêtes. In Derbyshire, mushy peas served with chips is called a 'pea mix'. Mushy peas are also popular in Scotland served with fish and chips or a wetter version with vinegar in a bowl.

Mushy peas are often playfully referred to as "Yorkshire caviar", more in reference to the stereotype of Yorkshiremen as dour folk who won't spend money on luxuries than through any similarity between the soft green legume dish and sturgeons' roe. The nickname has stuck, though, and been seen as far afield as Bristol.[2]

A variant (particularly popular around Bolton, Bury and Preston, Lancashire, is parched peas – carlin peas (also known as maple peas, or black peas) are soaked and then boiled slowly and for a long time; the peas are traditionally served with vinegar.

Norwich Market has a permanent stall devoted to mushy peas. The stall has primarily sold mushy peas - without any colouring - for the last 60 years every day except Sunday (market closed). It is known to be the oldest such stall in East Anglia - possibly the UK.[3]

In North-West England, mushy peas served with chips is known as a 'Split'.[citation needed]

Green colouring is often used to colour mushy peas. It is typically achieved by adding the yellow and blue additives, E102 and E133, which together produce the green effect. The use of artificial colours results in bright green mushy peas. Pure mushy peas, with no colouring, tend to form a more grey-green end product. Sodium bicarbonate is often added to soften the peas to enhance the colour and to inhibit fermentation during soaking, which reduces later flatulence in consuming said foods. The British Food Standards Agency, on 28 April 2008, asked for a voluntary ban on artificial food colourings and suggested that the ban would be practical by the end of 2009. This would mean that certain foods, including mushy peas, would need to be free of the additive, otherwise the item might be removed from sale.[4] Mushy peas present a particular problem since there is presently no[verification needed] alternative to tartrazine (E102), that gives it the bright green colour. Without the colourant the dish would be murky grey. Ministers have stated that they will pursue a ban through law if food manufacturers do not phase out the food colourings.[5]