The Daytona Cubs are a minor league baseball team based in Daytona Beach, Florida. The team plays in the Florida State League (FSL), and is the Class A-Advanced affiliate of the Chicago Cubs major league club. The Cubs play at Jackie Robinson Ballpark; opened in 1914, the park seats 5,100 fans.

The team is currently managed by Buddy Bailey. Brady Ballard took over as general manager of the Cubs in 2009. Robbie Aaron is the radio play-by-play announcer and TV host for Cubs broadcasts. The team has won four FSL championships: in 1995, 2000, 2004 (co-champions with the Tampa Yankees), and 2008. Their fourth FSL Championship came over the Fort Myers Miracle, 3–1 in a five-game series. Tony Thomas was the series MVP.

The last Florida State League (FSL) baseball team to play in Daytona Beach, was known as the Daytona Beach Admirals, the Class A affiliate of the Chicago White Sox. In September 1987, the White Sox decided to move their Class A affiliate to Sarasota. This left Daytona without a major league player development contract, resulting in the Admirals' owner selling the team to the New York Mets. The Mets moved the team to Port St. Lucie to become the St. Lucie Mets. Daytona did not have professional baseball for five years after the move.[1]

The Cubs come to town

Prior to 1993, the Chicago Cubs were affiliated with the Winston Salem Warthogs, a Class A team that played in the Carolina League. At the end of the 1992 season, the Cubs decided to move their Class A affiliate to Florida. The Florida State League originally assigned the transplanted Cubs team to play at Baseball City Stadium in Davenport. However, Jordan Kobritz, the new owner and general manager of the minor league franchise, wanted the team to play in Daytona Beach instead.[2] Negotiations to bring the Cubs to Daytona Beach went on for a couple of months and were completed just in time to start the new season.[3][4][5]

The Daytona Cubs opened their first season on the road, sweeping the Vero Beach Dodgers, two games to zero.[6][7] The home opener was scheduled for April 12.[8] Jackie Robinson Ballpark was sold out on opening night.[7] Chelsea Clinton, President Clinton's daughter, was invited to Daytona to throw the opening pitch.[9] The young Ms. Clinton could not attend due to a family medical emergency, and Daytona Beach Mayor Larry Kelly and FSL President Chuck Murphy threw the ceremonial opening pitches instead.[7] The Cubs' public address announcer led fans in singing "Go, Cubs, Go," although with slightly altered lyrics (substituting "Daytona" for "Chicago"). The Daytona Cubs won their home opener with a score of 5–2 against the Sarasota White Sox, the Class A affiliate of the Chicago White Sox who left Daytona Beach five years earlier.[7] 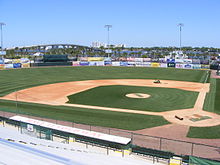 The Daytona Cubs' current, and only, ballpark is Jackie Robinson Ballpark. The venue has experienced several expansions and renovations since its completion in 1914, and currently seats 4,200 spectators.

In 1999, Daytona Cubs' owner and General Manager Jordan Kobritz decided to move a home game to Melching Field at Conrad Park, located in nearby DeLand. This ballpark is the home of the Stetson University Hatters baseball team. Kobritz's goal was to generate some fan interest in the Cubs, in the western part of Volusia County, Florida. The game (vs. the St. Petersburg Devil Rays) was played on June 26, 1999.[11] In August 2004, the D-Cubs had to move several games to Melching Field, due to damage to Jackie Robinson Ballpark, caused by Hurricane Charley.[12][13] The Cubs paid another visit to Melching Field on June 20, 2007, when they played a double-header against the Palm Beach Cardinals. The game was moved this time to benefit a local charity in Deland, as well as provide another opportunity to showcase the Daytona Cubs to fans in Deland.[14] 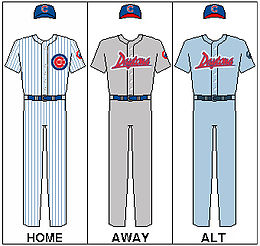 Daytona Cubs uniforms during the 2010 season

The team’s color scheme consists of red, white, and blue, the same colors used by the Chicago Cubs. The uniforms of the Daytona Cubs are descendants of the Chicago Cubs uniforms. Jerseys and pants for home games are made of white fabric with blue pinstripes, while those for road games are made of gray fabric with blue pinstripes. On home jerseys, the Chicago Cubs logo is located on the left chest, and a Daytona Cubs logo is located on the left sleeve. On road jerseys, the word "Daytona" is written across the chest in red script, and a Daytona Cubs logo is present on the left shoulder. The player's number is written on the back in large blue characters surrounded by red. Blue t-shirts, of varying sleeve lengths, are worn underneath the jerseys.

The team's batting practice uniforms, which double as alternate uniforms, are made of light blue fabric with white pinstripes. "Daytona" is written across the chest in red script. There is a Daytona Cubs logo on the left shoulder. Numbers, in blue surrounded by red, are sewn on the back in block characters.

The official home and road caps are blue with either the Chicago Cubs or Daytona Cubs logo centered on the front. A blue belt is worn on all the different uniforms along with blue ankle-length socks.

Cubby, mascot of the Daytona Cubs

The Daytona Cubs originally used a version of the Chicago Cubs emblem. In 1994, the Cubs hired Benedict Advertising, a local marketing firm, to develop a new logo. Benedict's design department created a bear cub wearing sunglasses and a backwards baseball cap, which would reflect a laid back setting in Daytona Beach. The logo became the official patch used on Daytona Cubs uniforms and souveniers.[15]

A mascot for games was developed from the logo: an anthropomorphic bear named Cubby, who first appeared on the field on May 27, 1994 (this day is marked as Cubby's "birthday"). He has brown fur and wears the same style of uniform as the team, but wearing his hat backwards. Cubby has been the team's mascot since 1994. When he is not attending games, Cubby acts as the team's Goodwill Ambassador, visiting local schools and charity events.[16]

Daytona Cubs fans have learned to not get attached to any particular players, since the reward for superior play is to be taken away from Daytona and sent up to a higher farm team. Cubby has been an adequate substitute to represent the team to the public.

The Daytona Cubs do not offer any printed periodicals at this time. However, the team does offer subscriptions to a monthly e-mail newsletter. Local newspaper coverage of the team is provided by The Daytona Beach News-Journal and Orlando Sentinel newspapers.

In March 2011, the Daytona Cubs announced they were forming a radio parnership with WSBB 1230AM, to broadcast all of the home and away games on the station. The broadcast team of Robbie Aaron, Dan Acheson, and Chad Seely will be providing play-by-play coverage.[17]

Cubs games are not commonly broadcast on television. There has only been casual interest in Daytona from television networks that cover their parent Chicago Cubs.[18]

However, a weekly television program, titled "Inside Daytona Cubs Baseball," is broadcast weekly on WDSC-TV (formerly known as WCEU-15), the local PBS station licensed to Daytona State College. The 30-minute show, usually co-hosted by the current Cubs Announcer and Manager, features player interviews, team news, tips from players on how to play the game, and other related content. The show is usually broadcast on Wednesday nights, with a rebroadcast on Sunday evenings.[19]

Hitting for the cycle

Three Cubs players have hit for the cycle to date:

The Daytona Cubs have the benefit of adapting the culture of the Chicago Cubs. From the D-Cubs' first home game, Steve Goodman's song "Go, Cubs, Go," was sung by the fans. Substitute "Daytona" for "Chicago" and "Robinson field" for "Wrigley Field" and the tune fits almost perfectly. Another classic baseball song, "Take Me Out to the Ball Game," has a Cubs version ("Take Me Out to the Cubs Game"), which is sung periodically at home games.

Many Daytona Cubs players have advanced to play in the major leagues; most of them with the Chicago Cubs, a few with other teams. 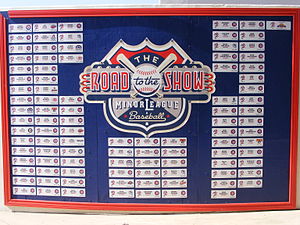 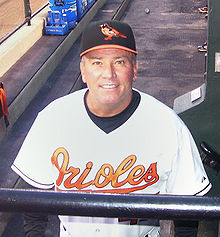 Eleven men have managed the Daytona Cubs baseball team since its inception in 1993. Four managers have guided the team to win the FSL Championship: Dave Trembley (1995), Richie Zisk (2000), Steve McFarland (2004), and Jody Davis (2008).[10] Trembley won 290 games from 1995 to 1996 and 2001 to 2002, placing him first on the all-time wins list for Cubs managers. Having managed the team for 545 games, he is also the longest-tenured manager in team history. The manager with the highest winning percentage over a full season or more is Steve McFarland (.556). Conversely, the lowest winning percentage over a season or more is .429 by the team's first manager, Bill Hays. Buddy Bailey is the team's current manager; he managed his first Cubs game in 2006. He was replaced as manager following the season but returned to Daytona in 2009. These records are correct as of the end of the 2010 season.