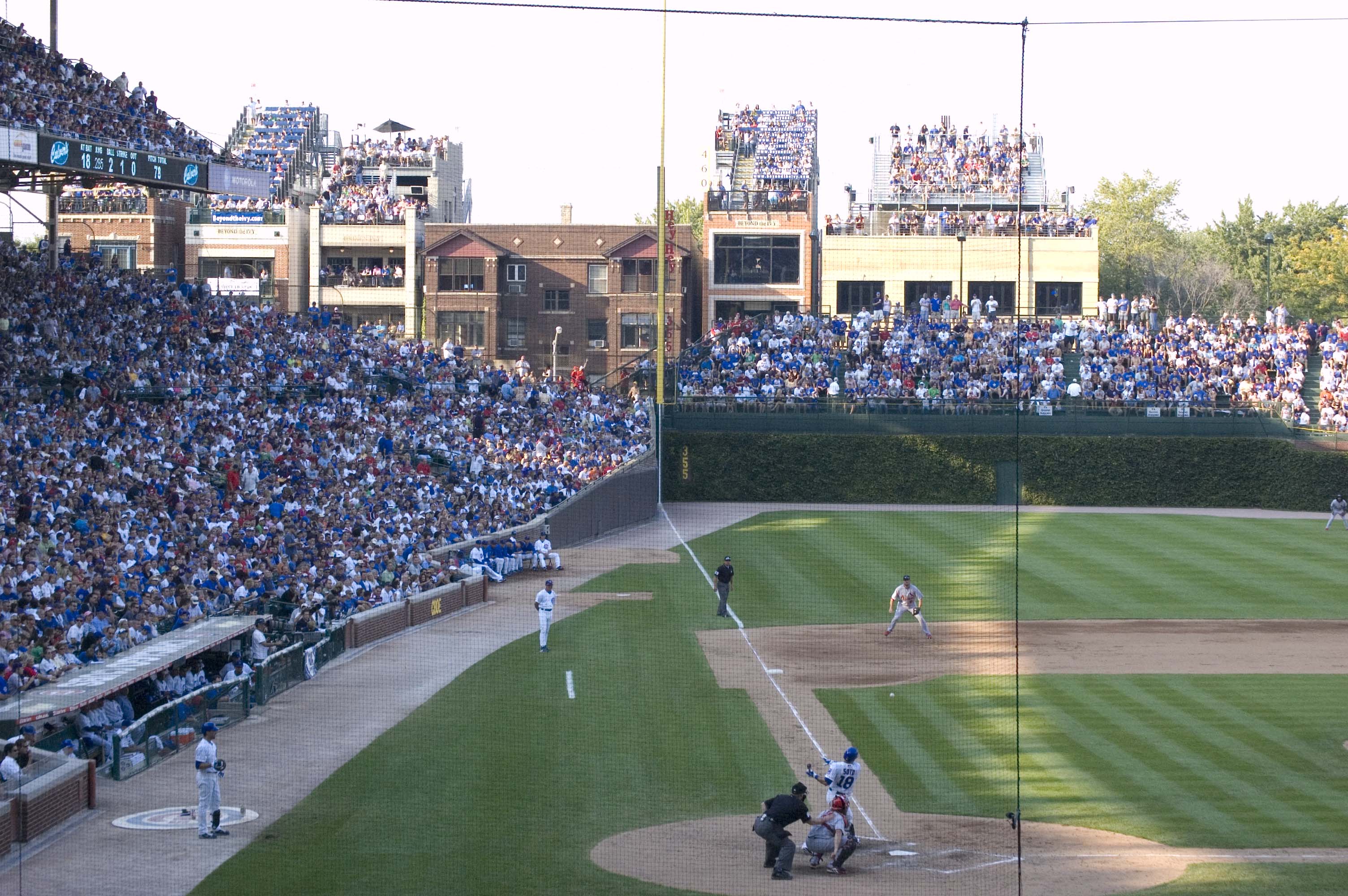 width1 = 150
caption1 = View of Wrigley Rooftops beyond at 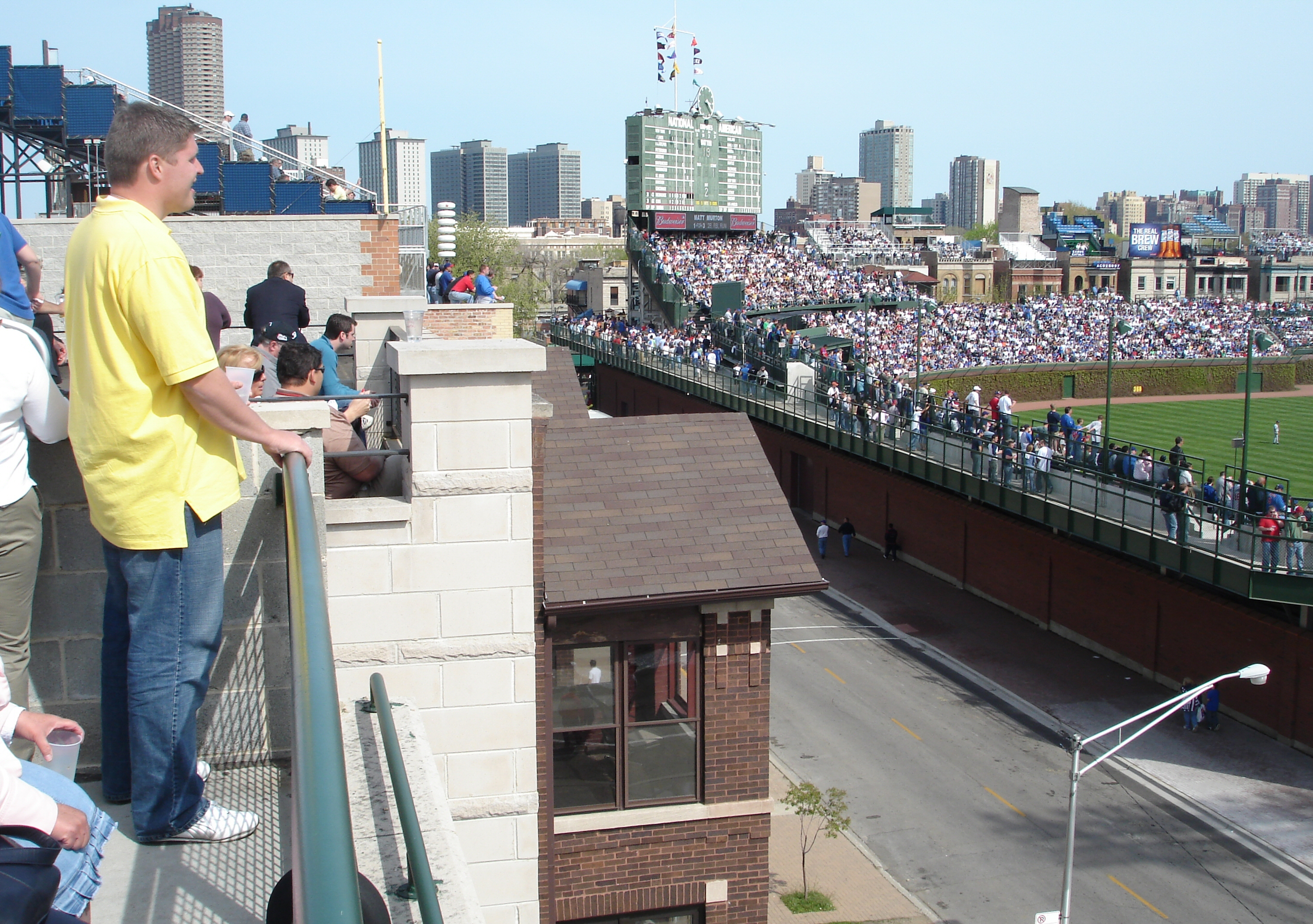 Wrigley Rooftops is a generic name for the rooftops of residential buildings which have s or seating on them to view baseball games or other major events at . Since 1914, [cite web
title = Best Seats in House Are Outside Wrigley
publisher = New York Times
date =
url = http://www.wrigleyfieldrooftopclub.com/images/2005-06-12-New-York-Times-Article.pdf] Wrigley roofs have dotted the neighborhood of Wrigleyville around Wrigley Field, where the play . Venues on Waveland Avenue overlook left field, while those along Sheffield Avenue have a view over right field.

The rooftops had always been a gathering place for free views of the game, but until the 1980s, the observers were usually just a few dozen people watching from the flat rooftops, windows and porches of the buildings, with "seating" consisting of a few folding chairs, and with little commercial impact on the team. Once the Cubs returned to winning ways in the 1980s, formal seating structures began to appear, and building owners began charging admission, much to the displeasure of Cubs management, who saw it as an unreasonable encroachment.

Various methods of combatting this phenomenon were discussed. The idea of a "", as with in Philadelphia, or the Cubs' previous home, , was discussed. The idea was not implemented, nor was it fully abandoned. Before Opening Day in 2002, a "wind screen" was temporarily erected on top of the ballpark's back screen behind the outfield wall, obscuring much of the view from Wrigley roofs. The Cubs had made their point, and progress towards a balanced relationship with the Wrigleyville neighbors would soon be achieved.

In , the Cubs organization brought a against the Rooftop Association for . Since operators of Wrigley roofs charge admission to use their amenities, the Cubs asserted that they were pirating a copyrighted game--normally a license would be paid for the privilege of viewing Major League Baseball--and sued for royalties. [cite web
title = The roof as a copyright infringement tool
date =
url = http://www.oreillynet.com/etel/blog/2002/12/the_roof_as_a_copyright_infrin.html] In 2004, eleven of the thirteen roofs settled with the club out of court, agreeing to pay 17% of gross revenue in exchange for official endorsement. [cite web
title = Team to receive portion of rooftop revenue
publisher = ESPN.com
date =
url = http://sports.espn.go.com/espn/print?id=1706351&type=story] The city also began investigating the structural integrity of the roofs, issuing citations to those in danger of collapse.

With the Cubs and the neighbors reaching agreement, many of the rooftops now feature seating structures: some with bleachers, some with chair seats, and even one with a steel-girdered "double deck" of seats (see photo).

The Cubs now endorse their "Official Rooftop Partners" on their team page at MLB.com. [http://chicago.cubs.mlb.com/chc/ballpark/rooftops.jsp]