The Dunedin Blue Jays are a minor league baseball team based in Dunedin, Florida. They play in the Florida State League, and are the Class A-Advanced affiliate of the Toronto Blue Jays Major League Baseball club. They play their home games at Florida Auto Exchange Stadium, formerly Dunedin Stadium, which opened in 1990 and seats 5,510 fans.

Two teams named the Blue Jays, both affiliates of Toronto, have played in Dunedin: the original incarnation, from 1978 to 1979, and the current team, established in 1987. Since their inception they have won two division championships, in 2006 and 2008.

The original incarnation of the Dunedin Blue Jays was founded in 1978. They were established as the Class A affiliate of the new Toronto Blue Jays franchise. They played for two seasons in the Florida State League and were one of four Class A teams in Toronto's farm system. After the 1979 season the team was disbanded as Toronto expanded its farm system into higher classifications.[1]

Local interests were unable to sign a deal with other major league teams to keep minor league baseball in Dunedin; however Toronto continued to hold its spring training in the city. In 1987 Toronto decided to establish a new Florida State League franchise in Dunedin. They originally played at Grant Field until 1990, when Florida Auto Exchange Stadium, originally Dunedin Stadium, was completed in 1990.

When Major League Baseball owners considered locking out the regular players and using "scabs" instead for the 1995 season, Dunedin would have been used as the Toronto Blue Jays' home field due to Ontario laws concerning replacement workers.[2] The MLB labor dispute was resolved before the plan was implemented, however.

In 2006, the Blue Jays made it to the Florida State League Championship Series, losing to the St. Lucie Mets 3 games to 0. They also won the division championship in 2008, losing the league championship.

In 2007, the Dunedin Blue Jays were nominated for the 2007 Corporate Support Award, which is awarded annually by the Florida Recreation & Park Association, to an organization that goes above and beyond to support and fund recreational programming.

Dunedin Blue Jays players who have made it to Toronto: 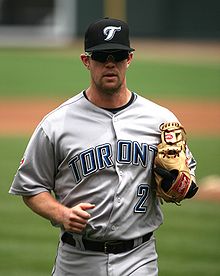