No 263 Squadron was an Royal Air Force fighter squadron formed in Italy towards the end of World War I. After being disbanded in 1919 it reformed in 1939 flying mainly strike and heavy fighter aircraft until becoming No 1 Squadron in 1958.

The squadron was formed in Italy on 27 September 1918 from flights of the Royal Naval Air Service after that service's amalgamation with the Royal Flying Corps to form the RAF. It flew Sopwith Babys and Felixstowe F3s from Otranto reconnoitring for submarines escaping from the Adriatic Sea into the Mediterranean Sea. The squadron was disbanded on 16 May 1919.[2][3]

The Gladiator may look like a World War I aircraft, but with twice the speed of most World War I fighters it had considerably better performance. However, as a fighter, it did not compare well with the type of enemy aircraft it might expect to meet in World War II, it was only slightly faster than the bomber it would soon meet in Norway – the Heinkel 111.

Germany invaded Norway on 9 April 1940 and 263 Squadron was soon instructed to prepare for a move. On 20 April the aircraft were flown, via RAF Sealand, to Scapa Flow, Scotland where Fleet Air Arm pilots landed them on the aircraft carrier HMS Glorious[5] and 18 Gladiators sailed for Norway. On 24 April after two days sailing the Squadron flew their aircraft off the carrier to a landing strip on the frozen lake Lesjaskogsvatnet in Oppland in central southern Norway.

Unfortunately the squadron was extremely short of ground staff and equipment, few of their Gladiators had been prepared for combat when the Luftwaffe struck with Heinkel 111s shortly after daybreak on 25 April. By the end of 26 April, although 263 Squadron had managed to destroy two Heinkels all their aircraft had been destroyed or rendered unservicable and by the end of the month the squadron was ordered home.

The squadrons had been ordered to defend the fleet anchorage at Skånland and the military base at Harstad on the island of Hinnøya. Action was short but intense before the squadrons were instructed on 2 June to prepare for evacuation; 263 Squadron had flown 249 sorties and claimed 26 enemy aircraft destroyed. 263's ten surviving Gladiators were landed on HMS Glorious on 7 June. Glorious sailed but was unfortunate to encounter German battleships Gneisenau and Scharnhorst. She was sunk and along with the aircraft from four squadrons 263 Squadron lost its CO, S/Ldr John W Donaldson, F/Lt Alvin T Williams and P.O. Sidney Robert McNamara along with seven other pilots.[2][3][4][6][7]

Westland Whirlwind of No. 137 Squadron RAF

The Westland Whirlwind was the first cannon-armed fighter for the RAF, first flown in October 1938 and at the production stage by 1940. It was a twin engined heavy fighter (also able to function as a fighter bomber with 500 lb bombload. With 4 20mm Hispano cannon in the nose, it was more powerful than an 8-gunned fighter like the Spitfire or Hurricane. It was fast, matching the current Spitfire's maximum speed, but performed best at low altitude and was used for convoy escort and against small targets in the channel and northern France. Only 114 were produced (compared with over 20,000 Spitfires)

No. 263 Squadron was to spend the next six months with 13 Group near Edinburgh, they reassembled on 10 June 1940 at RAF Drem and after two weeks moved to RAF Grangemouth where they spent three months before returning to Drem until November when they moved south to be nearer their intended targets in north France and the English Channel.

During their time in Scotland they were to sort out the final problems with the Rolls-Royce Peregrine engines and Hispano cannon, to fill the gap they were provided with Hawker Hurricanes which were flown in action a few times. Production of the Peregrine by Rolls-Royce was slow and it was November before they were fully equipped and the Hurricanes had disappeared. The squadron then transferred to RAF Exeter, commencing Chameleon patrols against enemy E-boats stationed in the English Channel and Western Approaches who would rescue bomber crews who had "ditched" in the sea. Here on the 12 January 1941 a section patrolling near the Isles of Scilly located a Junkers Ju 88 and Pilot Officer (PO) Stein was credited with a probable.

No. 263 Squadron flew Whirlwinds until the end of 1943 these three years being spent in the west :– two years in airfields around Wiltshire, Dorset and Gloucestershire; six months in south Wales and six months in Devon and Cornwall. Apart from periods of training and "rest & recuperation" the squadrons operations involved:– Air-ground attacks on airfields, railways and roads in north France; air-sea attacks on enemy shipping (E-boats and armed trawlers), sea convoy escort and bomber escort.[2][3] 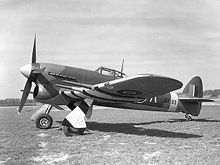 Like the Whirlwind, the Hawker Typhoon 1B was a fighter bomber or strike fighter. Although only powered by a single engine, the Napier Sabre, it was more powerful (2,260 hp) than the two Peregrine (885 hp each) Whirlwind engines. As well as four cannon it could be armed with two (later four) 500 lb (227 kg) bombs or eight "60lb" rockets. Like the Whirlwind it performed at its best at lower altitudes.

In December 1943, 263 Squadron became non-operational while aircrew and ground staff became familiar with the new plane. By the end of the month flying on the Whirlwind had shrunk to 22 hours and over 309 hours had been flown on the Typhoon. After two weeks Armament Practice Camp at RAF Fairwood Common, the squadron became operational again on 1 February 1944 and attacked for the first time on 3 February when three divebombing operations took place.

In 1944, the squadron along with another Typhoon squadron and a Spitfire escort was mistakenly ordered to attack a Royal Navy minesweeping flotilla with the result that HMS Britomart and HMS Hussar were sunk, 117 sailors killed and another 153 wounded.[8]

On 3 May 1945, three ships, the Cap Arcona, the Thielbek and the Deutschland, were sunk as a result of four separate attacks by Hawker Typhoons of No. 83 Group RAF. After No. 184 Squadron RAF and No. 198 Squadron RAF it was 263 Squadron's, by then based in RAF Ahlhorn (Großenkneten) who were led by Squadron Leader Martin T. S. Rumbold.

After disbandment on 28 August 1945, No. 616 Squadron RAF with the Gloster Meteor jet fighters was renumbered as 263 squadron at RAF Acklington. After Meteors, 263 Squadron moved onto Hawker Hunters in 1955. The unit arrived at Wattisham in October 1950, and transferred to Stradishall in August 1957. It was disbanded there on 1 July 1958 and renumbered to become No. 1 Squadron RAF. It was reformed for the last time on 1 June 1959 to operate the Bristol Bloodhound surface-to-air missile at RAF Watton until disbanding on 30 June 1963.[9]