No 208 (Reserve) Squadron is at present a reserve unit of the Royal Air Force based at RAF Valley, Anglesey, Wales. It operates the BAe Hawk aircraft.

The squadron was established as part of the Royal Naval Air Service on 25 October 1916[10][11] at Dunkirk as No. 8 (Naval) Squadron. In its earlier days, the unit flew Sopwith Pups, 1½ Strutters and Nieuport Scouts. Later in World War I it re-equipped with Sopwith Camels and was assigned to artillery spotting. The squadron returned to the UK briefly before being sent back to France to face the German offensive. While in France a significant number of Camels belonging to the squadron were destroyed by the RAF to prevent the Germans capturing them during their advance. When the Royal Air Force was formed on 1 April 1918, the unit was renumbered to No. 208 Squadron RAF. After the war ended 208 Squadron remained with the occupying forces until August 1919, when it again returned to the UK for disbandment on 7 November 1919 at Netheravon.[12]

The squadron reformed at RAF Ismailia in Egypt on 1 February 1920 by the renumbering of No. 113 Squadron RAF.[14] It was at first equipped with RE8s and from November 1920 till May 1930 with Bristol Fighters. The years between the wars were by no means quiet, in September 1922 the squadron was sent to Turkey for a year during the Chanak crisis, being stationed at San Stefano, a part of the Bakırköy district of Istanbul, Turkey.[14] After the conflict 208 Squadron went back to Egypt and in 1930 got Armstrong Whitworth Atlas aircraft to replace the old Bristol fighters. The Atlases in their turn were replaced five years later by Audaxes and for one flight by Demons. Just before the outbreak of World War II, in January 1939, these gave way for the Westland Lysander.[15]

No.208 Squadron was still stationed in Egypt at the outbreak of World War II. It joined the war effort in mid-1940 flying Westland Lysander reconnaissance aircraft and Hawker Hurricane fighters on army co-operation duties in the North African Campaign and the Greek Campaign of 1941. During the war it included a significant number of Royal Australian Air Force and South African Air Force personnel, along with other nationalities. Amongst the members of the squadron at this time was Robert Leith-Macgregor, shot down on more than one occasion, once ending up taxiing through a minefield, but managed not to trigger any mines.[16]

The unit was later stationed in Palestine, before returning to North Africa. It briefly converted to Curtiss Tomahawks, but received Supermarine Spitfires in late 1943 and flew them for the remainder of the war. From 1944, it took part in the Italian Campaign.

Shortly after the war 208 Squadron moved back to Palestine where it was involved in operations against the Egyptian Air Force. In 1948, the squadron moved to the Egyptian Canal Zone. It saw action in the Israeli War of Independence, losing four Spitfires in combat with Israeli Air Force aircraft (which also included Spitfires).

The last officially recorded "Air to Air fighter pilot kill" (bullets only without guidance systems) occurred on 22 May 1948, at 09:30 two Egyptian Spitfire LF.9s decided to stage a third attack on Ramat David. This time Fg Off Tim McElhaw and Fg Off Hully of 208 Squadron had taken over the standing patrol. Fg Off McElhaw, flying Spitfire FR.18 TZ228, managed to intercept and shoot down both LF.9s.[17]

In 1951, the squadron relocated to RAF Fayid where its Spitfires were replaced with Gloster Meteor jets. From there it moved to RAF Abu Sueir, relocating to RAF Takali, Malta, in August 1956, with interim spells earlier in the year at RAF Hal Far, Malta, and RAF Akrotiri, Cyprus. It disbanded at Takhali in January 1958, but it reformed the same month in the UK at RAF Tangmere from a nucleus of No. 34 Squadron RAF.[18] Two months later it returned to the Middle East with de Havilland Vampires and subsequently Hawker Hunter FGA.9s. In 1958 and early 1959 it operated from RAF Nicosia and RAF Akrotiri with a detachment at Amman, Jordan. The squadron disbanded at RAF Akrotiri on 31 March 1959.

The next day, 1 April 1959, it reformed at RAF Eastleigh, Nairobi, Kenya, by the re-numbering of No. 142 Squadron RAF under Squadron Leader R. Ramirez.[19] It operated from Eastleigh from April 1959 to March 1960, being redeployed home to RAF Stradishall from March to June 1960, but returning to Eastleigh in June, sending detachments to Kuwait and Bahrain during the period. It was moved to RAF Khormaksar in Aden in November 1961, under Air Forces Arabian Peninsula, which became Air Forces Middle East the same year.[20] In June 1964 it moved to Muharraq in Bahrain.The squadron remained in the Middle East until September 1971 when it was disbanded as a consequence of British drawdown of the armed forces from East of Suez. 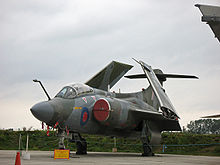 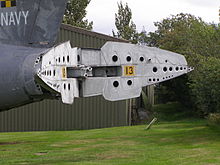 208 Squadron reformed at RAF Honington in 1974 with Blackburn Buccaneer S2s, assigned to SACEUR operating in a low-level strike role. The squadron's twelve Buccaneers were declared operational to SACEUR from 1975 armed with twentyfour WE.177 nuclear weapons.[21] The squadron was tasked with supporting land forces resisting an advance by the Warsaw Pact into western Europe, by striking at enemy forces, logistics and infrastructure beyond the forward edge of the battlefield, initially with conventional munitions, and with nuclear weapons in the event of escalation.[22] The allocation of the British-owned WE.177 weapon freed the squadron from the time-consuming burden, at a critical time, of using US-owned nuclear weapons held in US custody at a central location. The squadron continued in this role based at RAF Honington until late 1983,[23] when it moved base to RAF Lossiemouth and was re-assigned to SACLANT for maritime strike duties. The squadron's allocation of WE.177 nuclear weapons was reduced to twelve, one per aircraft,[24] although the Buccaneer was able to carry two in its internal bomb bay.[25] The squadron continued in this role until late 1993[26] when it relinquished its nuclear weapons. The unit was one of the last squadrons to operate the Buccaneer before it went out of service in 1994, and after the type's retirement the squadron again disbanded on 31 March 1994.[12] 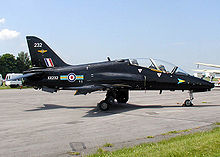 BAe Hawk of No. 208 Squadron in flight

208 Squadron reformed again on 1 April 1994 from 234 (Reserve) Squadron, attached to No. 4 Flying Training School. It moved to RAF Valley operating the BAe Hawk that it continues to fly to this day. No.4 FTS is made up of two squadrons; 208 Squadron provides the advanced flying training, students then moving onto 19 Squadron to receive tactics and weapons training. The vast majority of sorties undertaken by 208 Squadron are flown to teach RAF ab-initio pilots the fundamental skills of flying a fast-jet, to prepare them for tactical weapons training and onwards towards front-line aircraft such as the Tornado, Harrier and Typhoon. A summary of 208 Squadron's present tasks:

On 20 April 2007, a BaE Hawk from the squadron crashed near RAF Mona. The pilot was taken to hospital and discharged soon after. The accident was caused by a solo student stalling the aircraft on an overshoot.[27]