Charlotte of Spain (Carlota Joaquina Teresa Caetana; 25 April 1775 – 7 January 1830) was a Queen consort of Portugal as wife of John VI. She was the eldest daughter of King Charles IV of Spain and his wife Maria Luisa of Parma. 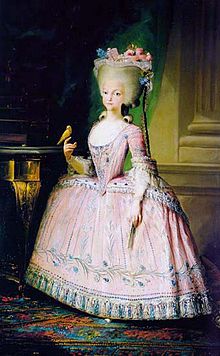 The then Infanta portrayed by Mariano Salvador Maella

She was born in Aranjuez. She was the eldest surviving child born to her parents. She was born during the reign of her paternal grand father, Charles III of Spain (1716–1788). Her father was the second son of Charles III and his Saxon wife Maria Amalia; her mother, Maria Luisa of Parma was a granddaughter of Louis XV of France through her mother Princess Louise Élisabeth of France, Louis XV's favourite daughter. Louise Élisabeth's husband Philip, Duke of Parma, was a younger brother of Charles III. Charlotte's future husband was a grandson of Mariana Victoria of Spain, sister of Charles III and the Duke of Parma.

The subject of her marriage was arranged by Mariana and Charles III in the late 1770s when Mariana went to Spain to encourage diplomatic relations between the estranged countries. Charlotte was to marry the Prince of Brazil and Charlotte's uncle Infante Gabriel would marry Infanta Mariana Vitória of Portugal, another grand child of Mariana Victoria of Spain. 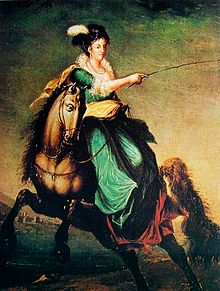 On 8 May 1785 she was officially married (consummated on 9 January 1790 in Lisbon) to the future John VI, King of Portugal, Brazil and the Algarves, the second son of Queen Maria I of Portugal and the late King Peter III of Portugal.

In 1788, when his eldest brother Joseph, Prince of Brazil, died, John became the first in line to his mother's throne. Soon he received the titles Prince of Brazil and 17th Duke of Braganza. Between 1788 and 1816, Charlotte was known as Princess of Brazil. John, her husband, was good-natured, indolent, corpulent and almost as ugly as was she. His religious observances bored her and they were quite incompatible. Nevertheless they produced nine children and, because they were all handsome, it was rumoured that especially the younger ones had a different father. After the birth of the ninth child they began to live separate lives, he at Mafra and she at Queluz. Here it was rumoured that she had bought a retreat where she indulged in sexual orgies.

In 1807, the Portuguese royal family left Portugal for Brazil because of the Napoleonic invasion.

While in Brazil, Charlotte made attempts to obtain the administration of the Spanish dominions in Latin America, a project known as Carlotism. Spain itself was under Napoleon and its kings, her father and brother Ferdinand, were held by Napoleon in France. She regarded herself as the heiress of her captured family. Allegedly among her plans was to send armies to occupy Buenos Aires and northern Argentina to style herself as Queen of La Plata. The Portuguese-Brazilian forces, however, only managed to annex the eastern banks of the river as Cisplatina, which were kept in the Empire after 1822 and seceded in 1828 as the Republic of Uruguay.

When the Portuguese Royal Family returned to Portugal in 1821 after an absence of 14 years, Charlotte met a country that had changed much since their departure. In 1807, Portugal had lived stably under absolutism. Napoleonic troops and the developments in her native Spain had brought revolutionary ideas. In 1820, a liberal revolution commenced in Oporto. A constitutional Cortes Gerais had been promulgated, and in 1821 it gave Portugal its first constitution. The queen had arch-conservative positions and wanted a reactionary development in Portugal. Her husband did not want to renege his vows to uphold the constitution. Charlotte made an alliance with her youngest son Miguel, who shared his mother's conservative views. In 1824, using Miguel's position as army commander, they took power and held the king a virtual prisoner in the palace, where the queen tried to make him to abdicate in favor of Miguel. However, the king received British help and regained power, finally compelling his son to leave the country. The queen had also to go briefly into exile.

King John VI lived in the Palace of Bemposta and Queen Charlotte in Queluz. Though she lived there quietly, she became decidedly eccentric in dress and behaviour. However, their eldest son, Pedro, left behind as regent in Brazil, was proclaimed and crowned on 1 December 1822 as its independent Emperor. John VI refused to accept this until, in August 1825, he was persuaded by the British to do so. In March 1826, prematurely aged, he died. Claiming ill-health, Charlotte refused to attend his deathbed and started the rumour that her husband had been poisoned by the Freemasons.

The Emperor of Brazil now became King of Portugal as well; but knowing this to be impossible, Peter abdicated in Portugal and made his eldest daughter Queen as well as betrothing her to Miguel, his younger brother. In the meantime Infanta Isabel Maria, Charlotte's daughter, was to be the regent in Portugal. About two years later the little queen set out, only to find upon arrival at Gibraltar that her uncle and fiancé had not only removed the regent but declared himself King of Portugal.

Shortly before King John's death, he nominated their daughter Infanta Isabel Maria as regent, a position usually occupied by the queen dowager.

Queen Charlotte died or killed herself at Queluz Palace.

Carlota in film and television