France and weapons of mass destruction

France and weapons of mass destruction

France is known to have an arsenal of weapons of mass destruction. France is one of the five "Nuclear Weapons States" under the Nuclear Non-Proliferation Treaty; but is not known to possess or develop any chemical or biological weapons.[1][2] France was the fourth country to test an independently developed nuclear weapon in 1960, under the government of Charles de Gaulle. The French military is currently thought to retain a weapons stockpile of around 300 operational nuclear warheads, making it the third-largest in the world.[3] The weapons are part of the national Force de frappe, developed in the late 1950s and 1960s to give France the ability to distance itself from NATO while having a means of nuclear deterrence under sovereign control.

France was one of the nuclear pioneers, going back to the work of Marie Curie. Curie’s last assistant Bertrand Goldschmidt became the father of the French Bomb. This was discontinued after the war[clarification needed] because of the instability of the Fourth Republic and the lack of finance available.[4] During the Second World War Goldschmidt invented the now-standard method for extracting plutonium while working as part of the British/Canadian team participating in the Manhattan Project. But after the Liberation in 1945, France had to start again almost from scratch. Nevertheless, the first French reactor went critical in 1948 and small amounts of plutonium were extracted in 1949. There was no formal commitment to a nuclear weapons program at that time, although plans were made to build reactors for the large scale production of plutonium.[5]

However, in the 1950s a civilian nuclear research program was started, a byproduct of which would be plutonium. In 1956 a secret Committee for the Military Applications of Atomic Energy was formed and a development program for delivery vehicles was started. The intervention of the United States in the Suez Crisis that year is credited with convincing France that it needed to accelerate its own nuclear weapons program to remain a global power.[6] In 1957, soon after Suez and the resulting diplomatic tension with both the USSR and the United States, French president René Coty decided on the creation of the C.S.E.M. in the then French Sahara, a new nuclear tests facility replacing the C.I.E.E.S.[7] With the return of Charles de Gaulle to the presidency of France in the midst of the May 1958 crisis, the final decisions to build an atomic bomb were taken, and a successful test took place in 1960. Since then France has developed and maintained its own nuclear deterrent.

France was eager to cooperate with other countries on nuclear weapons. In May 1954 the French were far from victory in the war in Indochina against Ho Chi Minh.

In 1956 the French agreed to secretly build the Dimona nuclear reactor in Israel and soon after agreed to construct a reprocessing plant for the extraction of plutonium at the site. The following year Euratom was created, and under cover of the peaceful use of nuclear power the French signed deals with Germany and Italy to work together on nuclear weapons development.[8] The West German Chancellor Konrad Adenauer told his cabinet that he "wanted to achieve, through EURATOM, as quickly as possible, the chance of producing our own nuclear weapons".[9] The idea was short-lived. In 1958 de Gaulle became President and Germany and Italy were excluded.

France is understood to have tested neutron or enhanced radiation bombs in the past, apparently leading the field with an early test of the technology in 1967 [10] and an 'actual' neutron bomb in 1980.[11]

A series of atmospheric tests was conducted by the Centre Saharien d'Expérimentations Militaires ("Saharan Military Experiments Center") from February 1960 until April 1961.

The first French atmospheric nuclear test, called "Gerboise bleue" ("blue jerboa") took place on 13 February 1960 in the French Sahara, during the Algerian War (1954–62). The explosion took place at 40 km from the military base of Reggane, which is the last town on the Tanezrouft Track heading south across the Sahara to Mali, and 700 km south of Béchar.[14] The device had a 70 kiloton yield. Although Algeria became independent in 1962 France continued nuclear tests there until 1966 although the later tests were underground rather than atmospheric. The General Pierre Marie Gallois was named le père de la bombe A ("Father of the A-bomb").

Three other atmospheric tests were carried out from 1 April 1960 to 25 April 1961. These four atmospheric tests were carried out at with a forward base at Hammoudia near Reggane. Military, workers and the nomadic Touareg population of the region were assisted at the test sites, without any significant protection. At most, a shower after each test according to L'Humanité.[15] Gerboise Rouge (5kt), the third atomic bomb, half as powerful as Hiroshima, exploded on 27 December 1960, provoking protests from Japan, USSR, Egypt, Morocco, Nigeria and Ghana.[16]

After the independence of Algeria on 5 July 1962, following the 19 March Evian agreements, the French military moved to In Ecker, also in the Algerian Sahara. The Evian agreements included a secret article which stated that "Algeria concede... to France the use of certain air bases, terrains, sites and military installations which are necessary to it [France]" during five years.

The C.S.E.M. was therefore replaced by the Centre d'Expérimentations Militaires des Oasis ("Military Experiments Center of the Oasis") underground tests facility. Experimentations lasted from November 1961 until February 1966. The 13 underground tests were carried out at In Ekker, 150 km north of Tamanrasset, from 7 November 1961 to 16 February 1966. By July 1, 1967, all French facilities were evacuated.

An accident happened on May 1, 1962, during the "Béryl" test, four times more powerful than Hiroshima and designed as an underground shaft test.[17] Due to improper sealing of the shaft, radioactive rock and dust were released into the atmosphere. Nine soldiers of the 621st Groupe d'Armes Spéciales unit were heavily contaminated by radiation.[18] The soldiers were exposed to as much as 600 mSv. The Minister of Armed Forces, Pierre Messmer, and the Minister of Research, Gaston Palewski, were present. As many as 100 additional personnel, including officials, soldiers and Algerian workers were exposed to lower levels of radiation, estimated at about 50 mSv, when the radioactive cloud produced by the blast passed over the command post, due to an unexpected change in wind direction. They escaped as they could, often without wearing any protection. Palewski died in 1984 of leukemia, which he always attributed to the Beryl incident. In 2006, Bruno Barillot, specialist of nuclear tests, measured on the site 93 microsieverts by hour of gamma ray, equivalent to 1% of the official admissible yearly dose.[15] The incident was documented in the 2006 docudrama "Vive La Bombe!"[19]

The French began development of the hydrogen bomb and built a new test range on the French Polynesian islands of Mururoa and Fangataufa. On 24 August 1968 France succeeded in detonating a thermonuclear weapon - codenamed Canopus - over Fangataufa. A fission device ignited a lithium 6 deuteride secondary inside a jacket of highly enriched uranium to create a 2.6 megaton blast which left the whole atoll uninhabitable because of radioactive contamination.[dubious – discuss] 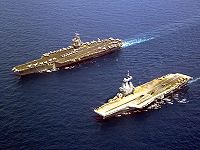 In 2006, French President Jacques Chirac, noted that France would be willing to use nuclear weapons against a state attacking France via terrorist means. He noted that the French nuclear forces had been configured for this option.[20]

On 21 March 2008, President Nicolas Sarkozy announced that France will reduce its plane-based nuclear arsenal (which currently consists of 60 TN-81 warheads) by a third (i.e. 20 warheads), thus bringing the total French nuclear arsenal to fewer than 300 warheads.[21][22]

WikiLeaks diplomatic cables titled "NUCLEAR NONPROLIFERATION TREATY (NPT) BILATERALS" sent on 6 August 2009 and "FRANCE'S POSITION ON NUCLEAR ISSUES IN THE RUN-UP" sent on 31 July 2009; make it possible to gain an insight to France's thought with regards to nuclear weapons, NPT and disarmament issues. In another cable titled "DOUBTS AND REASSURANCES ABOUT REPLACING BRITAIN'S TRIDENT NUCLEAR DETERRENT" sent on 24 July 2009, it is possible to view French worries to UK's decision making discussions regarding the UK's Trident nuclear weapons.

An association gathering veterans of nuclear tests (AVEN, "Association des vétérans des essais nucléaires") was created in 2001.[27] Along with the Polynesian NGO Moruroa e tatou, the AVEN announced on 27 November 2002 that it would depose a complaint against X (unknown) for involuntary homicide and putting someone’s life in danger. On 7 June 2003, for the first time, the military court of Tours granted an invalidity pension to a veteran of the Sahara tests. According to a poll made by the AVEN with its members, only 12% have declared being in good health.[15] An international symposium on the consequences of test carried out in Algeria took place on 13 and 14 February 2007, under the official oversight of President Abdelaziz Bouteflika.

150,000 civilians – without taking into account the local population – are estimated to have been on the location of nuclear tests, in Algeria or in French Polynesia.[15] One French veteran of the 1960s nuclear tests in Algeria described being given no protective clothing or masks, while being ordered to witness the tests at so close a range that the flash penetrated through the arm he used to cover his eyes.[28] One of several veteran’s groups claiming to organise those suffering ill effects, AVEN had 4500 members in early 2009.[27]

In both Algeria and French Polynesia there have been long standing demands for compensation from those who claim injury from France’s nuclear testing program. The government of France had consistently denied, since the late 1960s, that injury to military personnel and civilians had been caused by their nuclear testing.[29] Several French veterans and African and Polynesian campaign groups have waged court cases and public relations struggles demanding government reparations. In May 2009, a group of twelve French veterans, in the campaign group "Truth and Justice", who claim to have suffered health effects from nuclear testing in the 1960s had their claims denied by the government Commission for the Indemnification of Victims of Penal Infraction (CIVI), and again by a Paris appeals court, citing laws which set a statute of limitations for damages to 1976.[30] Following this rejection, the government announced it would create a 10m Euro compensation fund for military and civilian victims of its testing programme; both those carried out in the 1960s and the Polynesian tests of 1990–1996.[29] Defence Minister Hervé Morin said the government would create a board of physicians, overseen by a French judge magistrate, to determine if individual cases were caused by French testing, and if individuals were suffering from illnesses on a United Nations Scientific Committee on the Effects of Atomic Radiation list of eighteen disorders linked to exposure to testing.[29][31] Pressure groups, including the Veterans group "Truth and Justice" criticised the programme as too restrictive in illnesses covered and too bureaucratic. Polynesian groups said the bill would also unduly restrict applicants to those who had been in small areas near the test zones, not taking into account the pervasive pollution and radiation.[32] Algerian groups had also complained that these restrictions would deny compensation to many victims. One Algerian group estimated there were 27,000 still living victims of ill effects from the 1960-66 testing there, while the French government had given an estimate of just 500.[33]