Gerboise Bleue ("blue jerboa") was the name of the first French nuclear test. It was an atomic bomb detonated in the middle of the Algerian Sahara desert on 13 February 1960, during the Algerian War (1954–62).[1] General Pierre Marie Gallois was instrumental in the endeavour, and earned the nickname of père de la bombe A ("father of the A-bomb").

Gerboise is the French word for jerboa, a desert rodent found in the Sahara, while blue is the first color of the French tricolor flag. So the second and third bombs were named respectively "white" (Gerboise Blanche) and "red" (Gerboise Rouge), the remaining colors of the flag.

The most powerful first test A-bomb

With Gerboise Bleue, France became the fourth nuclear power, after the United States, the USSR, and the United Kingdom. Gerboise Bleue was by far the largest first test bomb up to that date, larger than the American "Trinity" (20 kt), the Soviet "RDS-1" (22 kt), or the British "Hurricane" (25 kt). The yield was 70 kilotons, bigger than these three bombs put together. General De Gaulle stated:

In comparison, Fat Man, the Nagasaki bomb, was 22 kilotons, one-third as powerful.

As the atomic yield of a new bomb design cannot be precisely predicted, the French army planned an explosion between 60 and 70 kt. Gerboise Bleue was a total success, yielding the full designed power.[1] 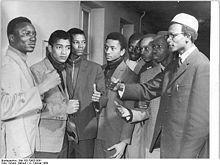 Students from Mali protesting in Leipzig against the French nuclear test

Due to increasing criticism, France stopped its atmospheric tests in the desert, and conducted further underground tests months after Algerian independence in 1962 according to secret agreements with the FLN.

From February 1960 to April 1961, France tested a limited number of atmospheric bombs in Reggane facility's C.S.E.M. (Centre Saharien d'Expérimentations Militaires, or "Saharan Center for Military Experiments"): the four Gerboise bombs. Three of them were only engins de secours ("emergency devices"), with yields deliberately reduced to less than 5 kilotons. With the underground tests the sequence designation was changed to jewel names, starting in November 1961 with "Agathe" (agate; <20 kt). On 1 May 1962, during the second test, the "Beryl incident" (incident de Béryl) occurred, which was declassified many years later.

Five months after the last Gerboise A-bomb, the Soviet Union responded by breaking its atmospheric tests moratorium, settled de facto since late 1958 with the United States and the United Kingdom. The USSR conducted many improvement tests, starting in September 1961 with a series of 136 large H-bombs. The series included the most powerful bomb ever tested, the 50-megaton (50,000 kt) "Tsar Bomba", which was detonated over Novaya Zemlya.

Following the USSR, the United States reactivated its own atmospheric test program with a series of 40 explosions from April 1962 to November 1962. This series included two powerful H-bombs topping 7.45 Mt and 8.3 Mt.[1]

In 1968, France detonated its first thermonuclear weapon, Canopus (2.6Mt), at the new facility at Fangataufa, a desert atoll in French Polynesia.

Gerboise Rouge was followed by a joined exercise, in which infantry, helicopters and armour recognised the contaminated area.[4]

Gerboise Verte was intended to yield between 6 and 18 kilotonnes, but effectively yielded less than 1.[4] Like Gerboise Rouge, it was followed by a joint exercise in the contaminated area, codenamed Garigliano.[4] The test had been patched up hastily and fired prematurely because of the Algiers putsch, as it was feared that the nuclear bomb could fall in the hands of seditious elements.[5]