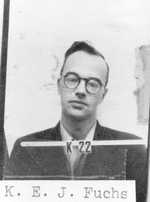 Klaus Fuchs is considered to have been the most valuable of the Atomic Spies during the Manhattan Project. 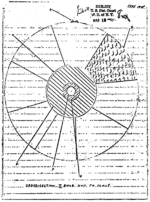 A drawing of an implosion nuclear weapon design by David Greenglass, illustrating what he supposedly gave the Rosenbergs to pass on to the Soviet Union.
Main article: Atomic Spies

During the Manhattan Project, the joint effort during World War II by the United States, the United Kingdom, and Canada to create the first nuclear weapons, there were many instances of nuclear espionage in which project scientists or technicians channeled information about bomb development and design to the Soviet Union. These people are often referred to as the Atomic Spies, and their work continued into the early Cold War. Because most of these cases became well-known in the context of the anti-Communist 1950s, there has been long-standing dispute over the exact details of these cases, though some of this was settled with the making public of the VENONA Project transcripts, which were intercepted and decrypted messages between Soviet agents and the Soviet government. Some issues remain unsettled, however.

The most prominent of these included:

Whether the espionage information significantly aided the speed of the Soviet atomic bomb project is also disputed. While some of the information given, such as the highly technical theoretical information given by Klaus Fuchs, would be thought to have certainly aided in developing a nuclear weapon, the manner in which the heads of the Soviet bomb project, Igor Kurchatov and Lavrenty Beria, actually used the information has led later scholars to doubt it having had a role in increasing the speed of development. According to this account, Kurchatov and Beria used the information primarily as a "check" against their own scientists' work, and did not liberally share the information with them, distrusting both their own scientists as well as the espionage information. Later scholarship has also shown that the decisive force in early Soviet development was not problems in weapons design, but, as in the Manhattan Project, the difficulty in procuring fissile materials, especially as the Soviet Union had no uranium deposits known when it began its program (unlike the United States).

In 1986, a former technician, Mordechai Vanunu, at the Israeli nuclear facility near Dimona revealed information about the Israeli nuclear weapon program to the British press, confirming widely-held notions that Israel had an advanced and secretive nuclear weapons program and stockpile. Israel has never acknowledged or denied having a weapons program, and Vanunu was abducted and smuggled to Israel, where he was tried in camera and convicted of treason and espionage.

Whether Vanunu was truly involved in espionage, per se, is debated: Vanunu and his supporters claim that he should be regarded as a whistle-blower (someone who was exposing a secretive and illegal practice), while his opponents see him as a traitor and his divulgence of information as aiding enemies of the Israeli state. Vanunu did not immediately release his information and photos on leaving Israel, travelling for about a year before doing so. The politics of the case are hotly disputed.

Design information about the W88 warhead, a miniaturized variant of the Teller-Ulam design, was allegedly stolen by PRC agents.
Main article: Cox Report

In a 1999 report of the United States House of Representatives Select Committee on U.S. National Security and Military/Commercial Concerns with the People's Republic of China, chaired by Rep. Christopher Cox (known as the Cox Report), it was revealed that U.S. security agencies believed that there is an on-going nuclear espionage by the People's Republic of China (PRC) at U.S. nuclear weapons design laboratories, especially Los Alamos National Laboratory, Lawrence Livermore National Laboratory, Oak Ridge National Laboratory, and Sandia National Laboratories. According to the report, the PRC had "stolen classified information on all of the United States' most advanced thermonuclear warheads" since the 1970s, including the design of advanced miniaturized thermonuclear warheads (which can be used on MIRV weapons), the neutron bomb, and "weapons codes" which allow for computer simulations of nuclear testing (and allow the PRC to advance their weapon development without testing themselves). The United States was apparently unaware of this until 1995.

The investigations described in the report eventually led to the arrest of Wen Ho Lee, a scientist at Los Alamos, initially accused of giving weapons information to the PRC. The case against Lee eventually fell apart, however, and he was eventually charged only with mishandling of data. Other people and groups arrested or fined were scientist Peter Lee (no relation), who was arrested for allegedly giving submarine radar secrets to China, and Loral Space & Communications and Hughes Electronics who gave China missile secrets. No other arrests regarding the theft of the nuclear designs have been made. The issue was a considerable scandal at the time. 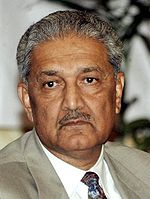 In January 2004, Dr. Abdul Qadeer Khan, a Pakistani nuclear scientist, confessed to selling restricted nuclear weapons technology to Libya, Iran, and North Korea. According to his testimony and reports from intelligence agencies, Khan sold designs for gas centrifuges (used for uranium enrichment), Chinese designs for a nuclear warhead, and sold centrifuges themselves to these three countries. Khan had previously been indicated as having taken gas centrifuge designs from a uranium enrichment company in the Netherlands (URENCO) which he used to jump-start Pakistan's own nuclear weapons program. On February 5, 2004, the president of Pakistan, General Pervez Musharraf, announced that he had pardoned Khan. Pakistan's government claims they had no part in the espionage, but refuses to turn Khan over for questioning by the International Atomic Energy Agency.