Northam is a town in Western Australia, situated at the confluence of the Avon and Mortlock Rivers, about 97 kilometres (60 mi) north-east of Perth in the Avon Valley. At the 2006 census, Northam had a population of 6,009.[1] Northam is the largest town in the Avon region. It is also the largest inland town in the state not founded on mining.

The area around Northam was first explored in 1830 by a party of colonists led by Ensign Robert Dale, and subsequently founded in 1833. It was named by Governor Stirling, probably after a village of the same name in Devon, England. Almost immediately it became a point of departure for explorers and settlers who were interested in the lands which lay to the east.

This initial importance declined with the growing importance of the other nearby towns of York and Beverley, but the arrival of the railway made Northam the major departure point for fossickers and miners who headed east towards the goldfields.

A severe thunderstorm lashed the town and surrounding areas on 27 January 2011 resulting in roofs being ripped off, trees being uprooted and power lines being brought down.[2] About 50 houses were damaged in the town as a result of the storm but no injuries were reported..[3]

During the 1940s and 1950s in Northam there were extensive camps for displaced persons and immigrants from Europe.

The Northam Migrant Accommodation Centre closed in September 1951. It had been the first place of residence in WA for approximately 15,000 immigrants from the Baltic states, Hungary, Poland, Czechoslovakia, Italy, Yugoslavia, Ukraine, Belarus and Bulgaria.[4] During the peak immigration period, Northam had the largest immigrant receiving facilities within the State and the third largest in Australia. By 1950, the camp housed 4,000 people and two new blocks of huts were built to accommodate them all.[5] By May 1954, 23,000 migrants had passed through the Northam Camp once the Accommodation Centre had closed.

Northam has a Mediterranean climate with hot dry summers and cool wet winters.

For many years Northam consisted of the Town of Northam and Shire of Northam. After 53 years of debates and attempts, these two councils merged on 1 July 2007 to form one new council called the Shire of Northam. 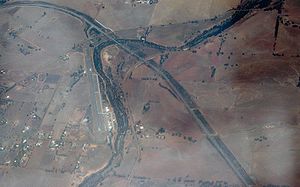 Northam airport, at the junction of Great Eastern Highway with Route 115, near the bridge over Mortlock River North

Northam is a major railway junction, and serves as the commercial centre for much of the western Wheatbelt. The dual gauge Eastern Railway terminates here and becomes the standard gauge Eastern Goldfields Railway. Narrow gauge radiates both south of the town to York and beyond (Great Southern Railway), and north to Goomalling, another rural railway junction.

The Northam railway station is used for the Prospector and Avonlink rural train services. The original station on Fitzgerald Street was opened in 1900 and closed in 1966 when the new Eastern Railway route became operational.[7]

The Australian Railroad Group have a large railway yard named Avon Yard west of the town.

Northam has some very committed sporting teams. Australian rules football is an obsession with many of the people of Western Australia. Northam has two teams that play in the Avon Football Association competition, Federals and Railways.

Field and indoor hockey, cricket, and netball also attract significant numbers of players and spectators. Individual sports such as tennis and cycling including BMX are also popular.

Steve Fossett became the first person to fly around the world alone, non-stop, in a hot air balloon when he launched from Northam on 19 June 2002, and returned to Australia on 3 July, landing in Queensland.[8]

The Avon Descent is held every year starting in Northam.

The Northam Flying 50's, a historic car racing event, is held each year in early April and attracts around 5,000 spectators each year.

The Northam Agricultural Show is also a yearly attraction which is held over a Friday and a Saturday in mid September.

The Kep Ultra running race is held each year on the Foundation Day long weekend in early June. The race starts in Northam and includes 100km and 75km events finishing at Mundaring Weir. [9]

Northam is the birthplace of the following people: