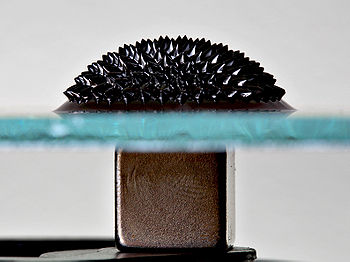 Ferrofluid on glass, with a magnet underneath.

A ferrofluid (portmanteau of ferromagnetic, and fluid) is a liquid which becomes strongly magnetized in the presence of a magnetic field.

Ferrofluids are colloidal liquids made of nanoscale ferromagnetic, or ferrimagnetic, particles suspended in a carrier fluid (usually an organic solvent or water). Each tiny particle is thoroughly coated with a surfactant to inhibit clumping. Large ferromagnetic particles can be ripped out of the homogeneous colloidal mixture, forming a separate clump of magnetic dust when exposed to strong magnetic fields. The magnetic attraction of nanoparticles is weak enough that the surfactant's Van der Waals force is sufficient to prevent magnetic clumping or agglomeration. Ferrofluids usually[1] do not retain magnetization in the absence of an externally applied field and thus are often classified as "superparamagnets" rather than ferromagnets.

The difference between ferrofluids and magnetorheological fluids (MR fluids) is the size of the particles. The particles in a ferrofluid primarily consist of nanoparticles which are suspended by Brownian motion and generally will not settle under normal conditions. MR fluid particles primarily consist of micrometre-scale particles which are too heavy for Brownian motion to keep them suspended, and thus will settle over time because of the inherent density difference between the particle and its carrier fluid. These two fluids have very different applications as a result.

Ferrofluid is the oily substance collecting at the poles of the magnet which is underneath the white dish.

Ferrofluids are composed of nanoscale particles (diameter usually 10 nanometers or less) of magnetite, hematite or some other compound containing iron. This is small enough for thermal agitation to disperse them evenly within a carrier fluid, and for them to contribute to the overall magnetic response of the fluid. This is analogous to the way that the ions in an aqueous paramagnetic salt solution (such as an aqueous solution of copper(II) sulfate or manganese(II) chloride) make the solution paramagnetic.

Particles in ferrofluids are dispersed in a liquid, often using a surfactant, and thus ferrofluids are colloidal suspensions – materials with properties of more than one state of matter. In this case, the two states of matter are the solid metal and liquid it is in.[2] This ability to change phases with the application of a magnetic field allows them to be used as seals, lubricants, and may open up further applications in future nanoelectromechanical systems.

True ferrofluids are stable. This means that the solid particles do not agglomerate or phase separate even in extremely strong magnetic fields. However, the surfactant tends to break down over time (a few years), and eventually the nano-particles will agglomerate, and they will separate out and no longer contribute to the fluid's magnetic response.

However, ferrofluids lose their magnetic properties at sufficiently high temperatures, known as the Curie temperature.

Ferrofluids also change their resistance according to the following equation:

When a paramagnetic fluid is subjected to a strong vertical magnetic field, the surface forms a regular pattern of peaks and valleys. This effect is known as the normal-field instability. The instability is driven by the magnetic field; it can be explained by considering which shape of the fluid minimizes the total energy of the system.[3]

From the point of view of magnetic energy, peaks and valleys are energetically favorable. In the corrugated configuration, the magnetic field is concentrated in the peaks; since the fluid is more easily magnetized than the air, this lowers the magnetic energy. In other words, the field lines prefer to run through the fluid, and they try to ride the spikes of fluid out into space as far as possible.[4]

Meanwhile, the formation of peaks and valleys is resisted by gravity and surface tension. It costs energy to move fluid out of the valleys and up into the spikes, and it costs energy to increase the surface area of the fluid. In summary, the formation of the corrugations increases the surface free energy and the gravitational energy of the liquid, but reduces the magnetic energy. The corrugations will only form above a critical magnetic field strength, when the reduction in magnetic energy outweighs the increase in surface and gravitation energy terms.[5]

Ferrofluids have an exceptionally high magnetic susceptibility and the critical magnetic field for the onset of the corrugations can be realised by a small bar magnet. 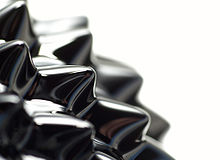 Macro photograph of ferrofluid influenced by a magnet.

The surfactants used to coat the nanoparticles include, but are not limited to:

These surfactants prevent the nanoparticles from clumping together, ensuring that the particles do not form aggregates that become too heavy to be held in suspension by Brownian motion. The magnetic particles in an ideal ferrofluid do not settle out, even when exposed to a strong magnetic, or gravitational field. A surfactant has a polar head and non-polar tail (or vice versa), one of which adsorbs to a nanoparticle, while the non-polar tail (or polar head) sticks out into the carrier medium, forming an inverse or regular micelle, respectively, around the particle. Steric repulsion then prevents agglomeration of the particles.

While surfactants are useful in prolonging the settling rate in ferrofluids, they also prove detrimental to the fluid's magnetic properties (specifically, the fluid's magnetic saturation). The addition of surfactants (or any other foreign particles) decreases the packing density of the ferroparticles while in its activated state, thus decreasing the fluids on-state viscosity, resulting in a "softer" activated fluid. While the on-state viscosity (the "hardness" of the activated fluid) is less of a concern for some ferrofluid applications, it is a primary fluid property for the majority of their commercial and industrial applications and therefore a compromise must be met when considering on-state viscosity versus the settling rate of a ferrofluid. 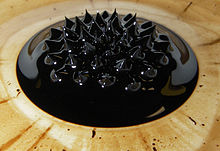 Ferrofluids are used to form liquid seals around the spinning drive shafts in hard disks. The rotating shaft is surrounded by magnets. A small amount of ferrofluid, placed in the gap between the magnet and the shaft, will be held in place by its attraction to the magnet. The fluid of magnetic particles forms a barrier which prevents debris from entering the interior of the hard drive. According to engineers at Ferrotec, ferrofluid seals on rotating shafts typically withstand 3 to 4 psi;[citation needed] additional seals can be stacked to form assemblies capable of higher pressures.

Ferrofluids have friction-reducing capabilities. If applied to the surface of a strong enough magnet, such as one made of NdFeB, it can cause the magnet to glide across smooth surfaces with minimal resistance.

NASA has experimented using ferrofluids in a closed loop as the basis for a spacecraft's attitude control system. A magnetic field is applied to a loop of ferrofluid to change the angular momentum and influence the rotation of the spacecraft.

Ferrofluids have numerous optical applications because of their refractive properties; that is, each grain, a micromagnet, reflects light. These applications include measuring specific viscosity of a liquid placed between a polarizer and an analyzer, illuminated by a helium-neon laser.

In medicine, ferrofluids are used as contrast agents for magnetic resonance imaging and can be used for cancer detection. The ferrofluids are in this case composed of iron oxide nanoparticles and called SPION, for "Superparamagnetic Iron Oxide Nanoparticles"

There is also much experimentation with the use of ferrofluids in an experimental cancer treatment called magnetic hyperthermia. It is based on the fact that a ferrofluid placed in an alternating magnetic field releases heat.

Ferrofluids are commonly used in loudspeakers to remove heat from the voice coil, and to passively damp the movement of the cone. They reside in what would normally be the air gap around the voice coil, held in place by the speaker's magnet. Since ferrofluids are paramagnetic, they obey Curie's law, thus become less magnetic at higher temperatures. A strong magnet placed near the voice coil (which produces heat) will attract cold ferrofluid more than hot ferrofluid thus forcing the heated ferrofluid away from the electric voice coil and toward a heat sink. This is an efficient cooling method which requires no additional energy input.[6]

Research is under way to create an adaptive optics shape-shifting magnetic mirror from ferrofluid for Earth-based astronomical telescopes.[7]

Some art and science museums have special devices on display that use magnets to make ferrofluids move around specially shaped surfaces in a fountain show-like fashion to entertain guests. Sachiko Kodama is known for her ferrofluid art.

The Australian electronic rock band, Pendulum, used ferrofluid for the music video for the track, Watercolour. The design house Krafted London was responsible for the ferrofluid FX in the video. The post-metal band Isis also uses a Ferrofluid in the music-video for 20 Minutes/40 Years.

CZFerro, an American art studio, began using ferrofluid in its productions in 2008. The works consist of ferrofluid displayed in a unique suspension solution. These works are often used as conversation pieces for offices and homes.

Recently, it has been demonstrated that ferrofluids of suitable composition can exhibit extremely large enhancement in thermal conductivity(k) (i.e. ~ 300% of the base fluid thermal conductivity). Studies confirmed that the large enhancement in k is due to the efficient transport of heat through percolating nanoparticle paths. Special magnetic nanofluids with tunable thermal conductivity to viscosity ratio can be used as multifunctional ‘smart materials’ that can remove heat and also arrest vibrations (damper). Such fluids offer exciting applications in microfluidic devices, micro and nano electromechanical systems (MEMS and NEMS) and other nanotechnology based miniature devices. [8]

Optical filters are used to select different wavelengths of light. The replacement of filters is cumbersome, especially when the wavelength is changed continuously with tunable type of lasers. Optical filters, tunable for differing wavelengths by varying the magnetic field can be built using ferrofluid emulsion. [9].