An osteotomy is a surgical operation whereby a bone is cut to shorten, lengthen, or change its alignment. It is sometimes performed to correct a hallux valgus, or to straighten a bone that has healed crookedly following a fracture. It is also used to correct a coxa vara, genu valgum, and genu varum. The operation is done under a general anaesthetic.

Osteotomy is one method to relieve pain in arthritis, especially of the hip and knee. It is being replaced by joint replacement in the older patient.

Due to the serious nature of this procedure, recovery may be extensive. Careful consultation with a physician is important in order to ensure proper planning during a recovery phase. Tools exist to assist recovering patients who may have non weight bearing requirements and include bedpans, dressing sticks, long-handled shoe-horns, grabbers/reachers and specialized walkers and wheelchairs.

Osteotomies of the hip 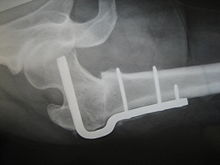 Two main types of osteotomies are used in the correction of hip dysplasias and deformities to improve alignment/interaction of acetabulum - (socket) - and femoral head (femur head) - (ball), innominate osteotomies and femoral osteotomies. The bones are cut, reshaped or partially removed to realign the load-bearing surfaces of the joint.

Adjustments are made to part of the hip-bone. Many operating methods and variations have been developed. They are defined by the type of cut and adjustment made Some acetabular procedures are named after the surgeons who first described them as Salter (R. Salter), Dega (W. Dega), Sutherland (D.H. Sutherland), Chiari (K. Chiari): other names one may encounter are Ludlov, P. Pemberton, and James B. Steele. Some are named after the shape of cut (e.g. Chevron, Wedge) or the way the bones are aligned (Dial=old style rotary dial phone).

Femoral osteotomies, as the name indicates, involves adjustments made to the femur head and/or the femur.[1]

Osteotomy of the knee

A model for this is the hinges on a door. When the door is shut, the hinges are flush against the wall. As the door swings open, one side of the door remains pressed against the wall as space opens up on the other side. Removing just a small wedge of bone can "swing" the knee open, pressing the healthy tissue together as space opens up between the femur and tibia on the damaged side so that the arthritic surfaces do not rub against each other.

The location of the removed wedge of bone depends on where osteoarthritis has damaged the knee cartilage. The most common type of osteotomy performed on arthritic knees is a high tibial osteotomy, which addresses cartilage damage on the inside (medial) portion of the knee. The procedure usually takes 60 to 90 minutes to perform.

During a high tibial osteotomy, surgeons remove a wedge of bone from the outside of the knee, which causes the leg to bend slightly inward. This resembles the realigning of a bowlegged knee to a knock-kneed position. The patient's weight is transferred to the outside (lateral) portion of the knee, where the cartilage is still healthy.

After regional or general anesthesia is administered, the surgical team sterilizes the leg with antibacterial solution. Surgeons map out the exact size of the bone wedge they will remove, using an X-ray, CT scan, or 3D computer modeling. A four- to five-inch incision is made down the front and outside of the knee, starting below the kneecap and extending below the top of the shinbone.

Guide wires are drilled into the top of the shinbone (tibia plateau) from the outside (lateral side) of the knee. The wires usually outline a triangle form in the shinbone.

A standard oscillating saw is run along the guide wires, removing most of the bone wedge from underneath the outside of the knee, below the healthy cartilage. The cartilage surface on the top of the outside (lateral side) of the shinbone is left intact. The top of the shinbone is then lowered on the outside and attached with surgical staples or screws, depending on the size of the wedge that was removed. The layers of tissue in the knee are stitched together, usually with absorbable sutures.

A fall or torque to the leg during the first two months after surgery may jeopardize healing. Patients must exercise extreme caution during all activities, including walking, until healing is complete.

It is especially important to avoid any serious knee injuries, such as torn ligaments or fractured bones, because arthritis can complicate knee injury treatment. High-impact or repetitive stress sports, like football and distance running, should be avoided.

Because osteoarthritis has multiple causes and may be related to genetic factors, no universal prevention tactic exists.

Osteotomy of the jaw

This is performed to realign the mandible (lower jaw) or maxilla (upper jaw) with the rest of the skull and/or teeth. This is usually performed to correct skeletal malocclusions, that is discrepancies in tooth position that cannot be corrected by simple orthodontic movement, and realignment of the temporomandibular joints, or to correct facial deformities such as mandibular retrognathia. There is little scarring, and all of the surgery takes places inside of the mouth. Orthodontic braces may have to be worn pre- and post- operation to realign the teeth to match the newly realigned jaw.

Osteotomy of the Chin

Chin osteotomies (cutting the bone and moving it) are done through an incision inside the mouth. It is technically more difficult than an implant and has more swelling and recovery than a simple chin implant. Also, there is usually temporary loss of feeling of the lip and chin after that takes several weeks to months for full return of sensation.

In veterinary medicine, osteotomies are frequently performed to address rupture of the canine cranial cruciate ligament, which is analogous to the anterior cruciate ligament. The tibial plateau leveling osteotomy and tibial tuberosity advancement are two of the most common ostetomy procedures performed in the United States. Recovery is often 6–8 weeks and the osteotomy can be filled with autologous bone grafts, scaffolds (hydroxyapatite, TR Matrix, etc.) or ceramics.[citation needed]