Mekong Delta
This article is about the geographical region. For the German heavy metal band, see Mekong Delta (band).

Location of the Mekong Delta region within Vietnam

The Mekong Delta (Vietnamese: đồng bằng sông Cửu Long “Nine Dragon river delta”) is the region in southwestern Vietnam where the Mekong River approaches and empties into the sea through a network of distributaries. The Mekong delta region encompasses a large portion of southwestern Vietnam of 39,000 square kilometres (15,000 sq mi).[1] The size of the area covered by water depends on the season.

The Mekong Delta has recently been dubbed as a 'biological treasure trove'. Over 10,000 new species have been discovered in previously unexplored areas of Mekong Delta, including a species of rat thought to be extinct.[2] 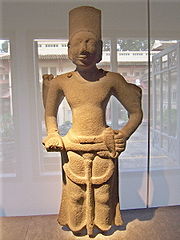 The Mekong Delta was likely inhabited long since prehistory; the empire of Funan and later Chenla maintained a presence in the Mekong Delta for centuries.[3] Archaeological discoveries at Oc Eo and other Funan sites show that the area was an important part of the Funan Kingdom, bustling with trading ports and canals as early as in the first century CE and extensive human settlement in the region may have gone back as far as the 4th century BCE.

The region was known as Khmer Krom (lower Khmer, or lower Cambodia) to the Khmer Empire, which likely maintained settlements there centuries before its rise in the 11th and 12th centuries.[nb 1] The kingdom of Champa, though mainly based along the coast of the South China Sea, is known to have expanded west into the Mekong Delta, seizing control of Prey Nokor (the precursor to modern-day Ho Chi Minh City) by the end of the 13th century.[nb 2] Author Nghia M. Vo suggests that a Cham presence may indeed have existed in the area prior to Khmer occupation.[nb 3]

Beginning in the 1620s, Khmer king Chey Chettha II (1618–1628) allowed the Vietnamese to settle in the area, and to set up a custom house at Prey Nokor, which they colloquially referred to as Sài Gòn.[4] The increasing waves of Vietnamese settlers which followed overwhelmed the Khmer kingdom—weakened as it was due to war with Thailand—and slowly Vietnamized the area. During the late 17th century, Mac Cuu, a Chinese anti-Qing general, began to expand Vietnamese and Chinese settlements deeper into Khmer lands, and in 1691, Prey Nokor was occupied by the Vietnamese.

Nguyễn Hữu Cảnh, a Vietnamese noble, was sent by the Nguyễn Lords of Huế by sea in 1698 to establish Vietnamese administrative structures in the area.[5] This act formally detached the Mekong Delta from Cambodia, placing the region firmly under Vietnamese administrative control. Cambodia was cut off from access to the South China Sea, and trade through the area was possible only with Vietnamese permission.[3] During the Tay Son wars and the subsequent Nguyễn Dynasty, Vietnam's boundaries were pushed as far as the Cape of Ca Mau. In 1802, Nguyễn Ánh crowned himself emperor Gia Long and unified all the territories comprising modern Vietnam, including the Mekong Delta.

Upon the conclusion of the Cochinchina Campaign in the 1860s, the area became Cochinchina, France's first colony in Vietnam, and later, part of French Indochina.[6] Beginning during the French colonial period, the French patrolled and fought on the waterways of the Mekong Delta region with their Divisions navales d'assaut (Dinassaut), a tactic which lasted throughout the First Indochina War, and was later employed by the US Navy Mobile Riverine Force.[7] During the Vietnam War—also referred to as the Second Indochina War—the Delta region saw savage fighting between Viet Cong (NLF) guerrillas and units of the United States Navy's swift boats and hovercrafts (PACVs).

Following independence from France, the Mekong Delta was part of the Republic of Vietnam and eventually the country of Vietnam. In the 1970s, the Khmer Rouge regime attacked Vietnam in an attempt to reconquer the Delta region. This campaign precipitated the Vietnamese invasion of Cambodia and subsequent downfall of the Khmer Rouge. 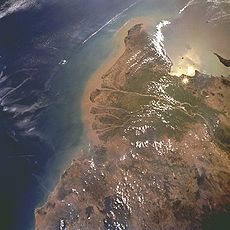 The Mekong Delta, as a region, lies immediately to the west of Ho Chi Minh City, roughly forming a triangle stretching from Mỹ Tho in the east to Châu Đốc and Hà Tiên in the northwest, down to Cà Mau and the South China Sea at the southernmost tip of Vietnam, and including the island of Phú Quốc.

The Mekong Delta region of Vietnam displays a variety of physical landscapes, ranging from mountains and highlands to the north and west to broad, flat flood plains in the south. This diversity of terrain was largely the product of tectonic uplift and folding brought about by the collision of the Indian and Eurasian tectonic plates about 50 million years ago. The soil of the lower Delta consists mainly of sediment from the Mekong and its tributaries, deposited over millions of years as the river changed its course due to the flatness of the low-lying terrain.[8]

Being a low-lying coastal region, the Mekong Delta is particularly susceptible to floods resulting from rises in sea level due to climate change. The Climate Change Research Institute at Can Tho University, in studying the possible consequences of climate change, has predicted that, besides suffering from drought brought on by seasonal decrease in rainfall, many provinces in the Mekong Delta will be flooded by the year 2030. The most serious cases are predicted to be the provinces of Ben Tre and Long An, of which 51% and 49%, respectively, are expected to be flooded if sea levels rise by 1 meter.[9]

The inhabitants of the Mekong Delta region are largely ethnic Viet, with Khmer minority populations living primarily in the Trà Vinh, Sóc Trăng, and Muslim Chăm in Tan Chau, by An Giang provinces. There are also sizeable Hoa (ethnic Chinese) populations in the Kiên Giang and Trà Vinh provinces.The region has approximately 17.4 million people. 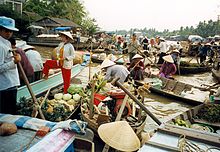 The region is famous as a large rice growing area. It produces about half of the total of Vietnam's rice output. Vietnam is the second largest exporter of rice globally after Thailand.[10] In fact, the delta produces more rice than Korea and Japan combined. Additionally, the region is home to large aquacultural industry of basa fish, Tra catfish and shrimp, much of which is exported.

The construction of the Can Tho Bridge, a cable-stayed bridge over the largest distributary of the Mekong River, was completed on April 12, 2010, three years after a collapse that killed 54 and injured nearly 100 workers. The bridge replaces the ferry system that currently runs along National Road 1A, and links Vĩnh Long Province and Cần Thơ city. The cost of construction is estimated to be 4.842 trillion Vietnamese đồng (approximately 342.6 million U.S. dollars), making it the most expensive bridge in Vietnam.[11]

Life in the Mekong Delta revolves much around the river, and many of the villages are often accessible by rivers and canals rather than by road.

The region is home to cai luong, a form of Vietnamese folk opera.