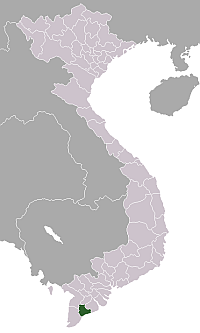 Bac Lieu (in Vietnamese, "Bạc Liêu"; : Fact|date=March 2008) is a Province of . It is a coastal province, and is situated in the region of the southern part of the country.

The provincial capital, which is also known as Bạc Liêu, is a separate municipality.

Bạc Liêu is generally thought of as being in the , although it is actually located slightly to the south of the 's main outflows. Bạc Liêu is around 100km south of Cần Thơ, the largest city in the Mekong Delta.

The most important parts of Bạc Liêu's economy are farming, , food processing, and manufacturing.

Until 1996, the area that now makes up Bạc Liêu Province was part of a larger unit, Minh Hai Province. Although it is located in Vietnam, many years ago this land was apart of the which ruled most of many centuries ago. It is still home to many ethnic . In 1996, Minh Hai was split into two, with the northeast becoming Bạc Liêu Province and the southwest becoming Cà Mau Province.

, an important song in the traditional music of southern Vietnam, was composed in Bac Lieu around 1918 or 1919.